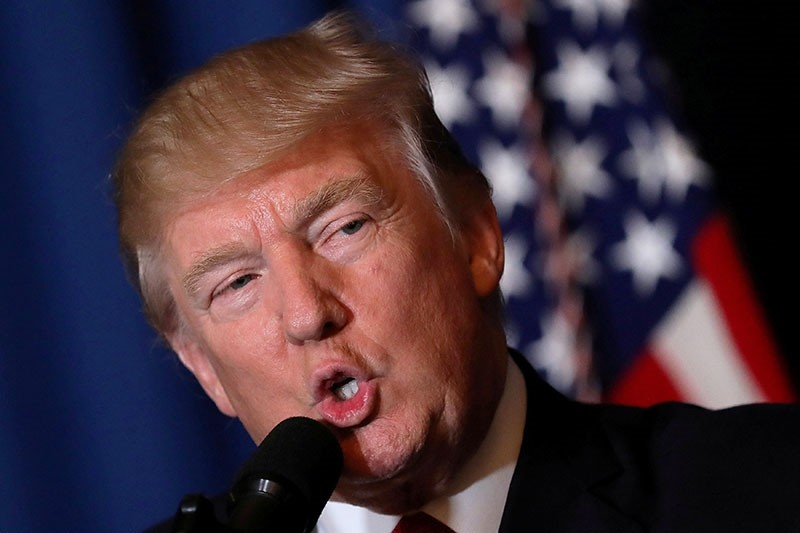 In the Syrian war, which has claimed hundreds of thousands of lives, the U.S. hit the regime for the first time. Yet, the attack meant more as Washington sent a message to its domestic public, Moscow, Tehran and Pyongyang, while mitigating its concerned allies, primarily Israel

The Syrian regime has killed more than 250,000 people, displaced millions and detained thousands since the war broke out in 2011. Despite the use of chemical weapons in 2013, described as one of the worst chemical attacks in the last half century, the U.S. and its main ally the U.K. chose not to conduct a military intervention, though they launched another one on Daesh, building an international coalition to do so. This time, it was different: The U.S. carried out an attack on the regime for first time in the last six years after the regime killed dozens with chemical weapons in Idlib last week.

Although the attack was not very destructive or harmful, it had symbolical significance. Three main reasons can be mentioned for the attack. First, it was much related to U.S. domestic politics since the recently inaugurated Donald Trump and his cabinet have been accused of establishing close ties with Russia and even of receiving its support during the elections.

Yet, with the recent changes in the cabinet after the revealed scandalous relations of certain figures with Russia, a more pro-Israel stance gets strengthened in Trump's equip. Second, Israel has become a staunch adversary of the Syrian regime since it considers Iran an existential threat to itself and is worried about Tehran's permanency in Syria.

The Lebanon-based, Iran-backed Hezbollah is also a main concern for the Israeli government since several Israeli officials recently made statements claiming Hezbollah was receiving weapons from both Iran and Russia, including chemical ones.

In an attempt to enhance its dominance over the Mediterranean, Israel, which recently redrew its maritime economic border with Lebanon to claim a disputed territory, desires to bar Iran from establishing a zone of influence nearby and is disturbed by Russia's growing power in the region.

Third, in spite of appearing to be irrelevant, the U.S. aims to send a strong message to North Korea, which recently tested new nuclear missiles. Coinciding with Chinese President Xi Jinping's visit to Washington in favor of reducing the fever, the attack received support from the Japan government, which declared its intention to increase its cooperation with the U.S. in the South China Sea against both Chinese and North Korean aggression.

Therefore, the attack was not baffling and was welcomed by other regional and international actors, sharing common concerns about Russia, Iran and North Korea.

Before Trump took the presidential post, his approach to Russia had been hotly debated in the U.S., leading to accusations by his opponents that he was backed by Russia. His main rival Hillary Clinton repeatedly said Russia attempted to interfere with the election in support of Trump. After Trump was elected, the allegations continued to be uttered by dissidents.

While a U.S. intelligence report said Putin ordered an intelligence operation targeting the presidential elections to harm Clinton's chances, the allegations caused the resignation of National Security Adviser Michael Flynn since he had failed to explain his relationship with Russia and Russian-funded entities. Yet, Trump might have changed his policy to mitigate his dissidents.

He appointed H. R. McMaster, who was hailed by pro-Israel circles, instead of Flynn. Security adviser Stephen K. Bannon, who has been accused of making Islamophobic and anti-Semitic statements, was removed as well.

Following his removal, Bannon lashed out at Trump's recently appointed senior adviser Jared Kushner, who is the president's son-in-law and son of Holocaust survivor parents. These changes have presumably been effective on taking the decision to conduct a military strike against the Syrian regime. By doing so, Trump aimed to quell dissidents on the Russian issue.

Second, it is unsurprising that Israel was among the countries making the harshest statements against the use of chemicals. Despite preserving its silence over the war, Israel recently started giving strong signals about its discontent with Iran's expanding influence and Russia's attempts to gain permanency in the Mediterranean Sea.

Israel seems determined to take action against Hezbollah, since Iran allegedly intends to build a military base near the disputed Golan Heights and has been building facilities to manufacture weapons inside Lebanon, and the Shiite radical group has chemical weapons.

At the same time, Russia's move to build a nuclear base in Tartous, Syria, deploy special units in Egypt and support Hezbollah, have tightened relations. In response, Israel proposed a bill last month that looked to redraw Israel's maritime economic border with Lebanon in an attempt to expand its control and economic benefits on the sea. Russia and Israel have avoided any direct encounter since the two countries do not want to address each other directly amid all the trouble entangling the region.

Therefore, the U.S. attack on the regime received full support from Israel, which proposes the establishment of a no-fly zone.Third, it was noteworthy that Japan was one of the first countries pledging support to the U.S. over the attack, which was carried out on the day the Chinese president visited the U.S. and the day after North Korea tested another nuclear missile.

Starting with former U.S. President Barack Obama's struggles to better ties with Asian countries, including Japan and Vietnam, the U.S. aims to create a bloc against China and North Korea, since Beijing has been making investments worth trillion of dollars all over the world and claiming more territory in the South China Sea to strengthen its military presence.

In addition, Pyongyang is considered a threat to U.S. national security. While the Trump administration has considered pursuing a different policy towards North Korea through enjoying Russia's mediating role, Asian countries and certain circles in the government were displeased. Therefore, the attack was likely a signal to North Korea to prove that the U.S. would not hesitate to use military force.

Although complicated and multi-sided, the only clear fact about the attack is that it will not change the course of the war immediately, as migration from Syria to Turkey continues, the targeted military base is still in use, and the regime continues to carry out heinous acts on civilians. The Trump administration, which promised and aims to make fundamental changes in U.S. foreign policy, seems to have been encouraged to carry out such an attack to mitigate allegations concerning Trump's relations with Russia, daunting Tehran, showing its limits for patience with Moscow, soothing Israeli concerns and intimidating North Korea.