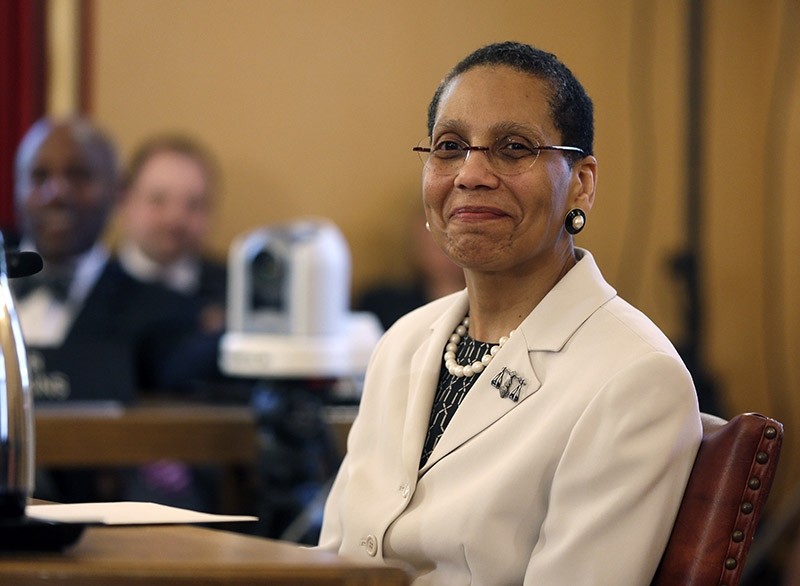 In this April 30, 2013 file photo, Justice Sheila Abdus-Salaam looks on as members of the state Senate Judiciary Committee vote unanimously to advance her nomination to fill a vacancy on the Court of Appeals at the Capitol in Albany, N.Y. (AP Photo)
by Compiled from Wire Services Apr 13, 2017 12:00 am

A groundbreaking black jurist who became the first Muslim woman to serve as a U.S. judge was found dead in New York's Hudson River on Wednesday, police said.

Police pulled Abdus-Salaam's fully clothed body from the water and she was pronounced dead at the scene. Her family identified her and an autopsy would determine the cause of death, the spokesman said.

Abdus-Salaam, a native of Washington, D.C., became the first African-American woman appointed to the Court of Appeals when Democratic Governor Mario Cuomo named her to the state's high court in 2013.

"Justice Sheila Abdus-Salaam was a trailblazing jurist whose life in public service was in pursuit of a more fair and more just New York for all," Cuomo said in a statement.

"As the first African-American woman to be appointed to the state's Court of Appeals, she was a pioneer," Cuomo said. "Through her writings, her wisdom and her unshakable moral compass, she was a force for good whose legacy will be felt for years to come."

Citing unidentified sources, the New York Post reported that Abdus-Salaam had been reported missing from her New York home earlier on Wednesday.

Abdus-Salaam graduated from Barnard College and received her law degree from Columbia Law School. She started her career as a staff attorney for East Brooklyn Legal Services and served as a judge in Manhattan state Supreme Court for 14 years, according to the state Office of Court Administration's website.

The president of the New York State Bar Association, Claire P. Gutekunst, said Abdus-Salaam grew up poor in a family of seven children in Washington, D.C., and "rose to become one of the seven judges in New York's highest court, where her intellect, judicial temperament and wisdom earned her wide respect."