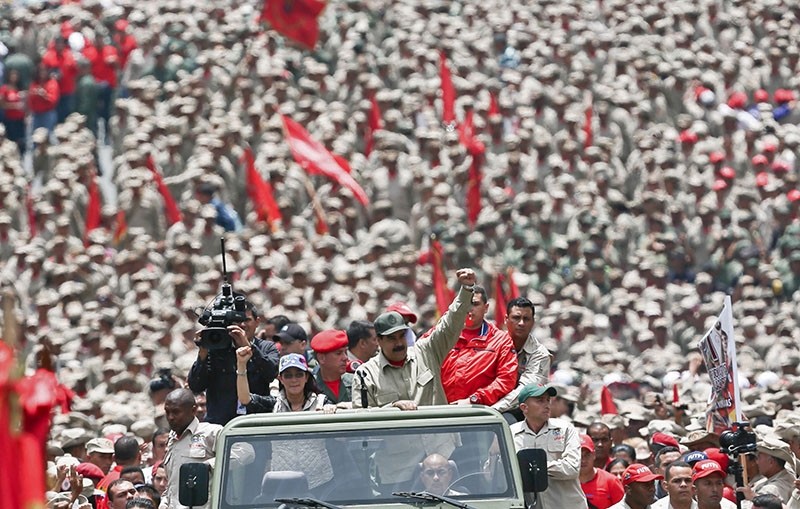 Handout picture released by the Venezuelan Presidency showing Nicolas Maduro (C) saluting next to his wife Cilia Flores as they arrive for the celebrations for the 7th anniversary of the Bolivarian Militia in Caracas on April 17, 2017. (AFP Photo)
by Compiled from Wire Services Apr 18, 2017 12:00 am

Maduro said he hopes to expand the number of civilians involved in the Bolivarian militias created by the late Hugo Chavez to 500,000, up from the current 100,000, and provide each member with a gun.

Speaking to thousands of militia members dressed in beige uniforms gathered in front of the presidential palace to mark the force's seventh anniversary, Maduro said it is time for Venezuelans to decide if they are "with the homeland" or against it.

"Now is not the time to hesitate," he said.

"I will guarantee the permanent training of the militias, their permanent deployment, their ability to handle the system of weapons, so they could defend their neighborhoods, their territory, their state," Maduro said. "To defend the coasts, rivers, jungles and the cities and towns of Venezuela from any imperialist intervention," he added.

The new measure allows the government to equip each new member of the Bolivarian militia with a rifle and comes as a new wave of social and political unrest sweeps across the Latin American nation and, according to the El Nacional newspaper, has resulted in six deaths and 538 arrests.

Recent protests were sparked by an attempt to dissolve the National Assembly stacked with Maduro's opponents. Adding fuel to the fire was the government's move earlier this month to bar the president's main opponent, Henrique Capriles, from holding office for 15 years.

The announcement comes as Maduro's opponents are gearing up for what they pledge will be the largest rally yet to press for elections and a host of other demands Wednesday.

Thousands of Venezuelans have taken to the streets since the Supreme Court stripped the National Assembly of its last vestiges of power nearly three weeks ago, a decision it later reversed. At least five people have been killed, dozens hurt and more than 100 detained in the demonstrations.

The Maduro government has vowed to hold a counter mass gathering Wednesday in defense of the socialist movement started by Chavez.

Chavez created the civilian militias with the goal of training 1 million Venezuelans to assist the armed forces in the defense of his revolution from external and domestic attacks. Maduro told the militia Monday that vision remains relevant as Venezuela continues to face "imperialist aggression."

"A gun for every militiaman!" he cried.

The militias are to be deployed to different defense zones in the country's 24 states.

Maduro warned of an alleged attempt by opposition coalition parties of the Democratic Unity Table (MUD) to promote a "fierce offensive" against his government.

The Bolivarian militias were created in 2008 by the popular President Hugo Chavez to help the armed forces with internal and external threats.

Maduro's government claims foreign-backed opposition leaders are fomenting violence in an attempt to remove him from power. The opposition denies that assertion, saying it is Maduro himself who is responsible for Venezuela's woes, including triple-digit inflation, rising crime and food shortages.

They also blame Maduro for ordering security forces to use tear gas against protesters and failing to stop pro-government armed groups from attacking demonstrators.