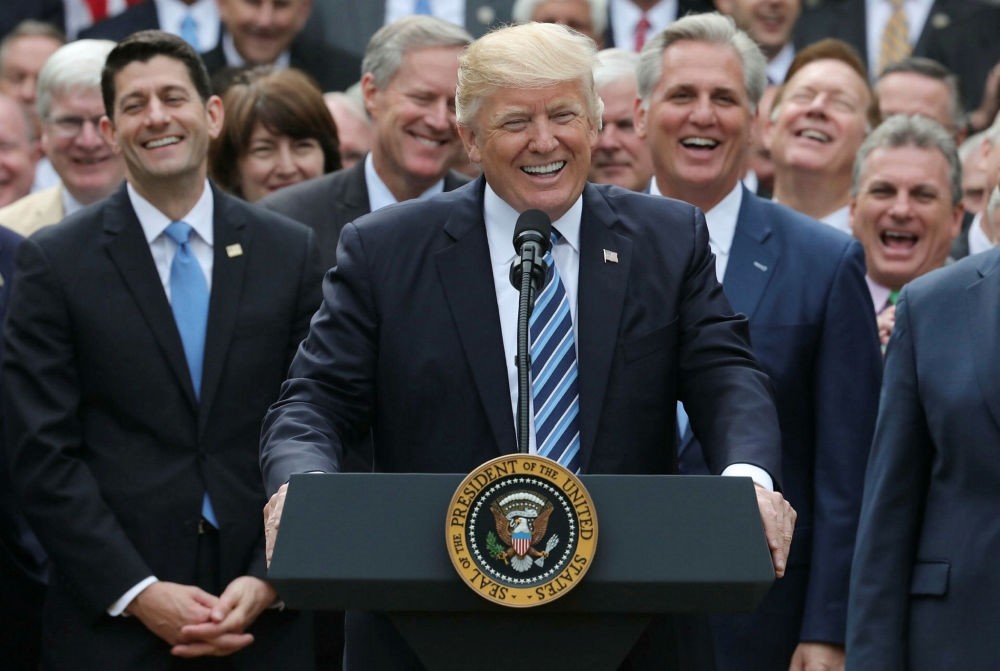 U.S. President Donald Trump celebrates with Congressional Republicans in the Rose Garden of the White House after the House of Representatives approved the American Healthcare Act Washington, D.C., May 4.
by Compiled from Wire Services May 06, 2017 12:00 am

President Donald Trump extracted a much-needed victory from U.S. Congress as Republicans pushed a bill through the House of Representatives to repeal Obamacare

Delivering at last, triumphant House Republicans voted Thursday to repeal and replace the "Obamacare" health plan they have reviled for so long, overcoming united Democratic opposition and their own deep divisions to hand a major win to President Donald Trump.

After seven years of campaign promises and dozens of show votes, Republicans finally succeeded in passing a health care bill that has a chance of becoming law.

The momentum appeared to carry over beyond health care. The House vote came hours after Trump signed an order to promote religious expression. GOP legislators moved closer to rolling back Obama-era financial regulations. The Senate approved a spending bill averting a government shutdown that would have been disastrous for the party with a monopoly on power.

The 217-213 vote was a narrow victory, and ultimate success is far from assured since the measure must still make its way through a highly skeptical Senate.

"What a great group of people!" Trump exclaimed at the White House, arms raised to salute the dozens of lawmakers who hurried to join him in the Rose Garden immediately after the vote. Set aside for the moment were the feuds and philosophical divides that nearly sank the bill time and again.

And at the same time, the Republicans had begun to show that perhaps they can come together and govern the country now that they control Washington in full.

It is a conservative dream years in the making: ditching Barack Obama's health care law, which Republicans blame for sending insurance premiums soaring while reducing options for millions.

Republicans including Trump have campaigned relentlessly on the pledge to dismantle the 2010 reforms. "This bill delivers on the promises that we have made to the American people," Ryan told cheering Republicans, while Democrats shouted their disapproval.

"A lot of us have been waiting seven years to cast this vote" to kill off Obamacare, he added. "End this failed experiment."

The GOP health bill would eliminate the fines Obama's law imposed on people who don't buy coverage, and erase tax increases in the Affordable Care Act on higher-earning people and the health industry. It would cut the Medicaid program for low-income people and let states impose work requirements on Medicaid recipients. It would transform Obama's subsidies for millions buying insurance, now based largely on their incomes, making the funding skimpier and tying it to consumers' ages.

And states could get federal waivers freeing insurers from other Obama coverage requirements. With waivers, insurers could charge people with pre-existing illnesses far higher rates than healthy customers, boost prices for older people to whatever they wish, and ignore a mandate that they cover specified services like pregnancy care. The bill would block federal payments to Planned Parenthood for a year, considered a triumph by many anti-abortion Republicans.
RELATED TOPICS