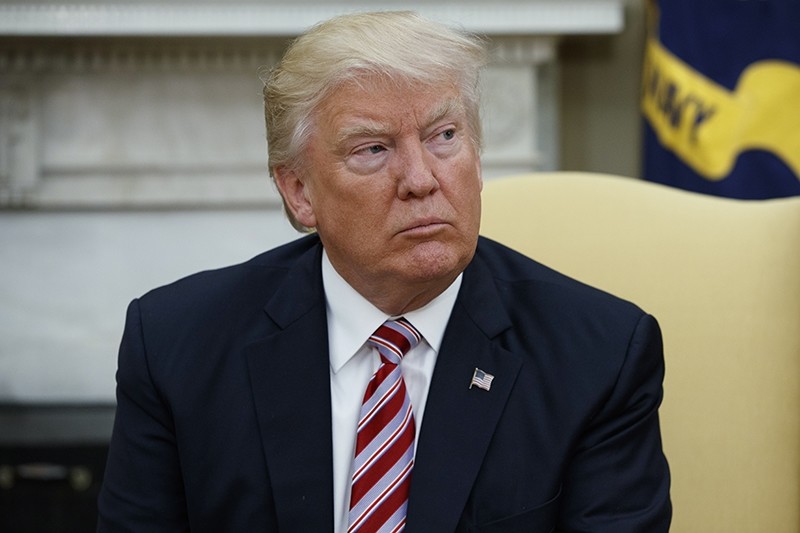 Donald Trump talks to reporters during a meeting with Dr. Henry Kissinger in the Oval Office of the White House,May 10, 2017, in Washington. (AP Photo)
by Compiled from Wire Services May 10, 2017 12:00 am

The White House says that President Donald Trump had considered firing FBI Director James Comey "since the day he was elected president."

White House spokeswoman Sarah Huckabee Sanders said Wednesday that the president had "lost confidence" in Comey and acted on the advice of the deputy attorney general and others when he decided to fire him on Tuesday.

Sanders said, "I think it's been an erosion of confidence" and that there were a lot of "missteps and mistakes" leading up to the decision to let Comey go.

Currently, the Justice Department is interviewing four veteran law enforcement and intelligence officials for the role of new FBI director. The interviews are being conducted by Attorney General Jeff Sessions and deputy Attorney General Rod Rosenstein.

Justice Department officials identified the contenders as Adam Lee and Michael Anderson, who run the FBI's field offices in Richmond, Virginia, and Chicago, respectively. Others are Paul Abbate, who oversees the FBI's criminal and cyber branch, and William Evanina, the government's chief counterintelligence officer and a former FBI supervisor.

McCabe met with Justice officials on Tuesday. It was not immediately clear how seriously he is being considered.

The interim chief would serve until Congress confirms a permanent director, which could take some time given bipartisan angst over Comey's firing. The Senate intelligence committee said it expects McCabe to appear at a hearing Thursday on current and projected national security threats.

The acting director would be able to serve in the position without Senate confirmation.

McCabe previously supervised the FBI's Washington field office, one of its largest, and also held leadership positions in counterterrorism and intelligence work.

McCabe's actions are among the decisions being scrutinized in an ongoing Justice Department inspector general probe of the FBI's handling of the Hillary Clinton email investigation. That investigation is looking into whether McCabe should have recused himself from the Clinton case after his wife received large campaign contributions from a Clinton ally during her failed Senate run

The FBI has said that when his wife first considered running for the seat, McCabe consulted with FBI ethics officers for guidance to prevent against actual or potential conflict of interest.