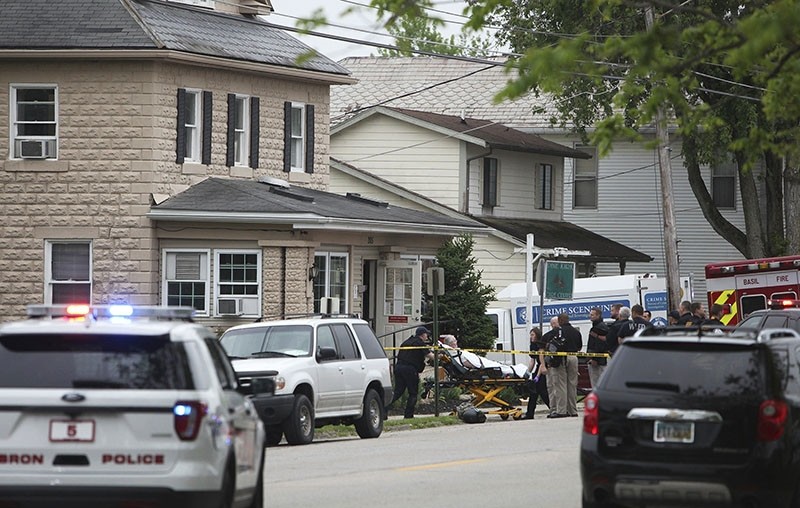 An armed man gunned down a new village police chief on an Ohio street on Friday and then killed two employees in a nearby nursing home, where he later was found dead, a sheriff said. No nursing home residents were injured, nor were two hostages briefly held by the alleged gunman.

The slain police chief, Steven Eric Disario, had headed the Kirkersville Police Department for only about three weeks, Licking County Sheriff Randy Thorp said. Disario was shot on a street near the Pine Kirk Care Center, and the two female employees and the gunman were found dead inside, Thorp said.

Authorities identified the gunman as Thomas Hartless, 43, of the nearby village of Utica. The employees were Marlina Medrano, a nurse, and 48-year-old Cindy Krantz, a nurse's aide. Medrano's age was not available

Disario, 36, was a father of six children, with a seventh on the way, the sheriff said. Flowers and flags appeared in an impromptu memorial outside the village police hall, located less than a block from the site of the shooting.

Thorp called it a hard day for all.

"We've lost a police officer. It's just a tragic event," he said. "I guess the only peace of mind is that the threat is over."

Thorp gave the following timeline of events in the village of about 500 residents, roughly 25 miles (39 kilometers) east of Columbus:

The gunman was in a wooded area behind the nursing home when he encountered two passers-by, whom he temporarily took hostage.

Disario, responding to a report of a man with a gun, apparently encountered the gunman in that area. The chief's last radio communication said he had the man in sight.

When a shot was fired at the chief, the hostages escaped unharmed.

"We don't know the cause or the purpose or what drove this individual to do this," Thorp said, adding that was being investigated.

Responding officers found Disario on the street and then investigated a report of a gunman at the nursing home, Thorp said.

Ohio Attorney General Mike DeWine, who came to the scene Friday afternoon, said search warrants had been executed on two vehicles owned by Hartless and at his home in Utica, about 30 miles (48 kilometers) away.

He later said Medrano had a relationship with Hartless. Officials said they lived on the same street.

Thorp said law enforcers were still working to determine what, if any, relationship the man had with the nursing home. The facility is secure, and it's unclear how the gunman got in, he said.

The shooting closed down the main street in the village, which was flooded with police officers from several surrounding agencies and with ambulances.

"We don't have this stuff go on around here," said Ron Rogers, 67, a local shopkeeper. "The only sirens we hear are when the Fire Department goes out."

A woman who lives across the street said she and her 6-year-old son heard it happen.

"We heard it all," said Tiffani Chester, 25. "We heard yelling, we heard the gunshots, then it was just sirens."

Pine Kirk is licensed for 24 patients and had 23 as of May 3, according to Ohio Department of Health records. A message was left with the center, whose employees appeared wheeling medical carts out of the facility Friday evening to put them into storage while patients are away.

Peter Van Runkle, the head of the state trade association representing nursing homes, told the Dispatch that Pine Kirk caters to "the forgotten members of society."

"They provide them with a small environment that's less institutional than some facilities might be," he said. "They do a good job of taking care of a niche clientele."

The state Bureau of Criminal Investigation is leading the probe into what happened. County Coroner Michael Campolo didn't expect to release autopsy results until Sunday, after all four victims had been examined.

Gov. John Kasich ordered flags flown at half-staff in Licking County and the Statehouse and expressed his condolences in a tweet.

"Join me in praying for his family, friends and colleagues, and for the others injured in this tragedy," the Republican governor said.