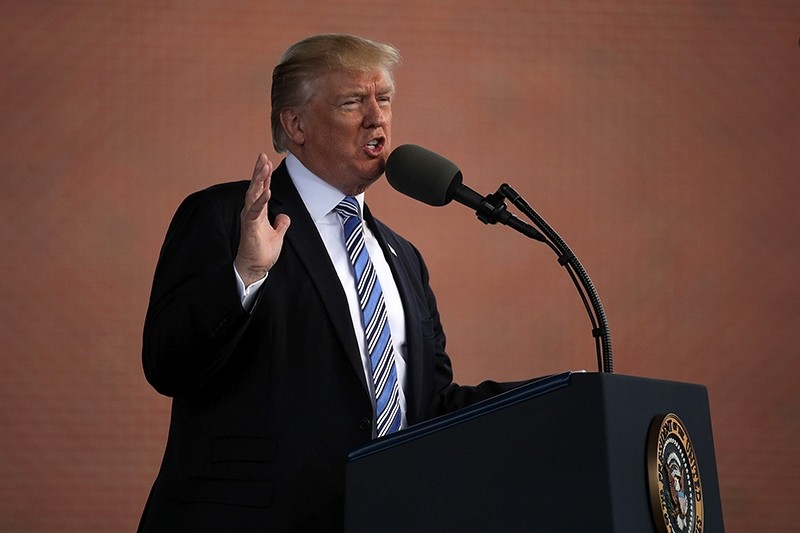 U.S. President Donald Trump delivers keynote address during the commencement at Liberty University May 13, 2017 in Lynchburg, Virginia (AFP Photo)
by May 13, 2017 12:00 am

President Donald Trump said Saturday he would act quickly to appoint a new FBI director following his controversial dismissal earlier this week of James Comey -- a move that was still reverberating around Washington.

Trump's administration -- embroiled in a deepening crisis over the sacking and its shifting explanation of events -- is interviewing the first candidates for the post on Saturday, U.S. media reported.

"We can make a fast decision," Trump told reporters aboard Air Force One before flying to southern Virginia, where he delivered his first commencement address as president at Liberty University, an evangelical Christian school.

The White House has provided no set timeline for the process of replacing Comey.

Asked if the decision or an announcement could take place before he leaves for Saudi Arabia on Friday, Trump said: "Even that is possible. I think the process is going to go quickly."

"They've been vetted over their lifetime, essentially," he said of the candidates, describing them as "very well-known, highly respected, really talented people," before adding: "And that's what we want for the FBI."

They may also speak to at least one more candidate: Adam Lee, who heads the FBI's office in Richmond, Virginia, according to Fox News.

They are among a dozen candidates being considered for the job.

The choice of a new FBI director seen as independent from the White House will be closely scrutinized as Trump faces an avalanche of criticism for firing Comey, the man in charge of a criminal probe into his campaign's possible ties to Russia.

The 49-year-old McCabe, a career FBI agent, has taken part in a number of high-profile investigations, including probes into the Boston Marathon bombing in 2013 and the attacks against U.S. installations in Benghazi, Libya in 2012.

McCabe contradicted Trump this week, telling lawmakers that Comey enjoyed widespread support among the FBI's rank and file, and that the probe into alleged Russian meddling in the election was a "highly significant investigation."

Cornyn, the number two Republican in the Senate, served as Texas attorney general before his election to the Senate in 2002.

Garcia served as assistant secretary for Immigration and Customs Enforcement and US attorney under former president George W. Bush.

Trump's nominee must be confirmed in the Senate, where Democrats and some Republicans have fiercely criticized Comey's firing, which came on Tuesday. FBI directors are appointed for a 10-year term.

The president is reported to have asked Comey whether he could be loyal to him during a dinner meeting in February shortly after his inauguration.

Comey promised only that he could be honest, The New York Times reported.

Trump denied that account in a Fox News interview on Friday.

Addressing the graduating students at Liberty University on Saturday, Trump appeared to defend his leadership, saying that doing "what is right" requires a willingness to "face criticism from those who lack the same courage."

"Nothing is easier or more pathetic than being a critic," he said, "because they are people that can't get the job done."