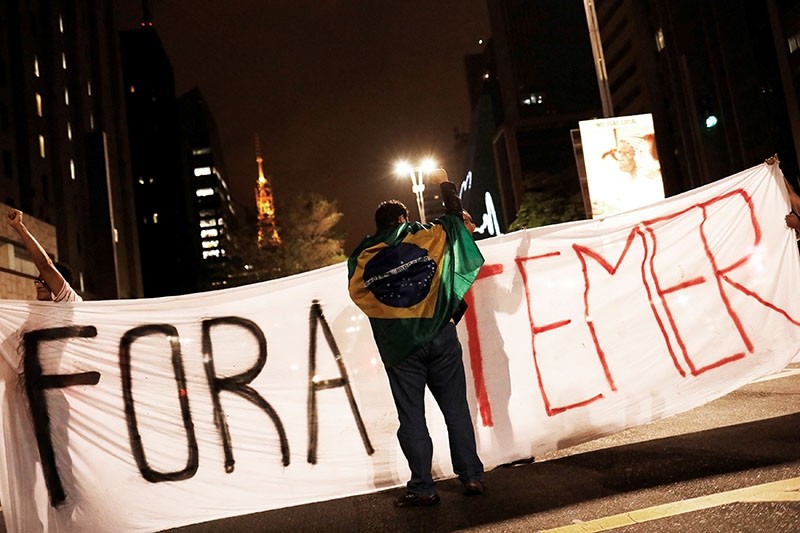 A demonstrator draped with a Brazilian Flag is pictured in front a banner reading ,Temer out, during a protest against Brazil's President Michel Temer in Sao Paulo, Brazil, May 17, 2017. (Reuters Photo)
by Compiled from Wire Services May 18, 2017 12:00 am

Stocks plunged, both chambers of Congress canceled sessions and President Michel Temer's office canceled his planned activities Thursday in the wake of a Globo newspaper report that he had been taped endorsing bribery of a former lawmaker.

Protests were planned in several cities and opposition politicians took to Twitter and local news channels to call for Temer to resign or be impeached, arguing his government no longer had legitimacy

"I can't see how Temer survives this," said David Fleischer, a political science professor at the University of Brasilia. "There are just too many people against him now."

The country's main Ibovespa stock index dropped 10 percent within 90 minutes of opening and trading was stopped for 30 minutes.

Blue-chip stocks such as lenders Itaú Unibanco Holding SA , and state-controlled oil company Petróleo Brasileiro SA subtracted the most points from the index.

The slump slashed 24 billion reais and 21 billion reais ($7 billion and $6.2 billion) off the market value of Itaú and Petrobras, respectively.

The Brazilian real slumped 7.0 percent, wiping out its gains for the year after reaching a two-month peak this week, while bond prices slumped. The sharp moves drove the market operator B3 to widen the limits on trading of several derivatives and put policymakers on alert.

The central bank sold $2 billion worth of new traditional currency swaps, which function like sales of dollars to investors for future delivery. The National Treasury called off an auction of fixed-rate and floating-rate bonds scheduled for Thursday, citing sharp market volatility.

The scandal deepened at dawn Thursday as police searched the Rio de Janeiro home and Brasilia office of Sen. Aecio Neves, who nearly won the presidency in 2014 and planned to run again next year.

Neves is being investigated in several corruption cases related to the "Car Wash" probe into kickbacks to politicians. He has denied wrongdoing.

Neves' whereabouts Thursday were not known. Attempts to reach him for comment were not successful.

Globo also reported that Batista had recorded Temer endorsing a bribe to silence former Speaker of the House Eduardo Cunha. In a statement late Wednesday, the president's office said Temer did not participate or authorize any attempt to keep Cunha from reaching a plea bargain with Justice (officials)."

If confirmed, the tape could prove devastating for Temer, whose administration has lurched from one crisis to another since he took office just over a year ago.

Cunha led the impeachment fight that removed Dilma Rousseff from the presidency last year and put Temer, then the vice president, into power. Cunha was later imprisoned on a 15-year sentence for corruption.

The statement from Temer's office confirmed that the president did meet with Batista in March. According to the Globo report, Batista secretly recorded the conversations with Temer and Neves and gave them to justice officials as part of plea bargain negotiations.

The report said that when Temer was told Cunha was being paid to keep silent, the president responded: "You have to keep that up, all right?"

Globo did not release the recordings or say how they were obtained.

JBS representatives did not respond to emails sent by The Associated Press seeking comment.

Temer and Cunha are members of the same party and were previously allies. However, they appear to have had a falling out amid a growing investigation into corruption involving the state oil giant Petrobras. Since launching three years ago, the "Car Wash" probe into billions of dollars in kickbacks has put several top businessmen and politicians in jail.

Many believe that Cunha, who was widely viewed as Brazil's most powerful politician before being ensnared in several corruption cases, could provide damaging testimony about dozens of others if he reaches a plea bargain with investigators.

Soon after Wednesday's report, both the Senate and Chamber of Deputies stopped sessions that included work on legislation that Temer's administration is pushing in hopes of pulling Latin America's largest economy out of its worst recession in decades.

"This climate isn't one in which to work," Rodrigo Maia, president of the lower chamber, told Globo News.

Globo's reports are the latest in numerous scandals that have plagued Temer, whose approval ratings are hovering around 10 percent. In April, it came to light that eight of his Cabinet ministers were being investigated in cases related to bribery or accepting campaign donations from Brazilian constructor Odebrecht, one of the central companies in the kickback scheme at Petrobras.

If the allegations are proven true, "President Temer is unlikely to finish his term," Eurasia wrote, adding that at the very least the matter will delay major reforms Temer is proposing.