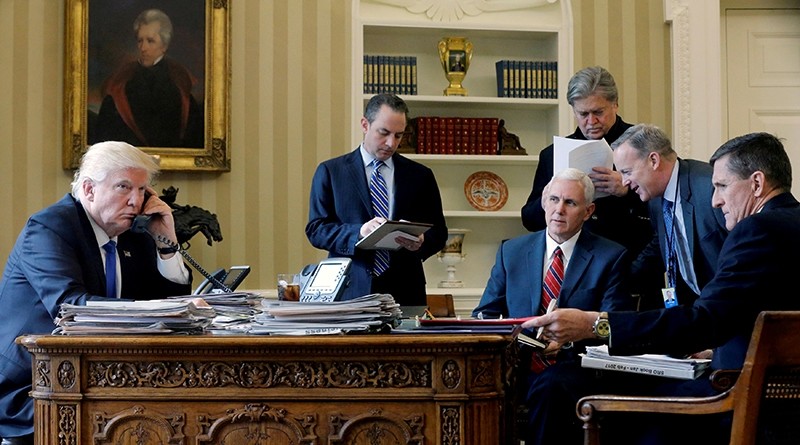 U.S. President Donald Trump (L-R), joined by Chief of Staff Reince Priebus, Vice President Mike Pence, senior advisor Steve Bannon (Reuters File Photo)
by Compiled from Wire Services May 18, 2017 12:00 am
U.S. President Donald Trump lashed out at the appointment of a special counsel to investigate allegations that his campaign collaborated with Russia to sway the 2016 election, tweeting Thursday that it is "the single greatest witch hunt of a politician in American history!"

His comment on Twitter came after former FBI chief Robert Mueller was appointed special counsel with sweeping powers to head the probe.

"This is the single greatest witch hunt of a politician in American history!" Trump wrote.

This is the single greatest witch hunt of a politician in American history!

"With all of the illegal acts that took place in the Clinton campaign & Obama Administration, there was never a special councel [sic] appointed!" he wrote.

Trump has denied any links to Moscow, but the appointment of a special counsel dramatically raises the stakes in a crisis threatening to paralyze his presidency.

The Republican leader, who has struggled to shake off suspicions that Russia helped put him in the White House, has been accused of seeking to block the investigation by firing FBI chief James Comey.

Republicans have largely stood behind Trump in the first months of his presidency as the FBI and congressional investigations into Russia's election meddling intensified. But GOP lawmakers have grown increasingly anxious since Trump fired Comey, who had been leading the bureau's probe — and after Comey associates said he had notes from a meeting in which Trump asked him to shut down the investigation into the Russia ties of former National Security Adviser Michael Flynn.

Trump is preparing to leave town Friday on his first foreign trip, and aides have been hopeful the journey will be a chance for the administration to get back on track after weeks of chaos and distractions.

Sen. Lindsey Graham, R-S.C., speculated Trump was probably happy to get out of town — "and a lot of us are glad he's leaving for a few days."

His advice to the president: "Stay disciplined, stay focused and deliver on the world stage."