Brazil's Temer urges suspension of investigation against him 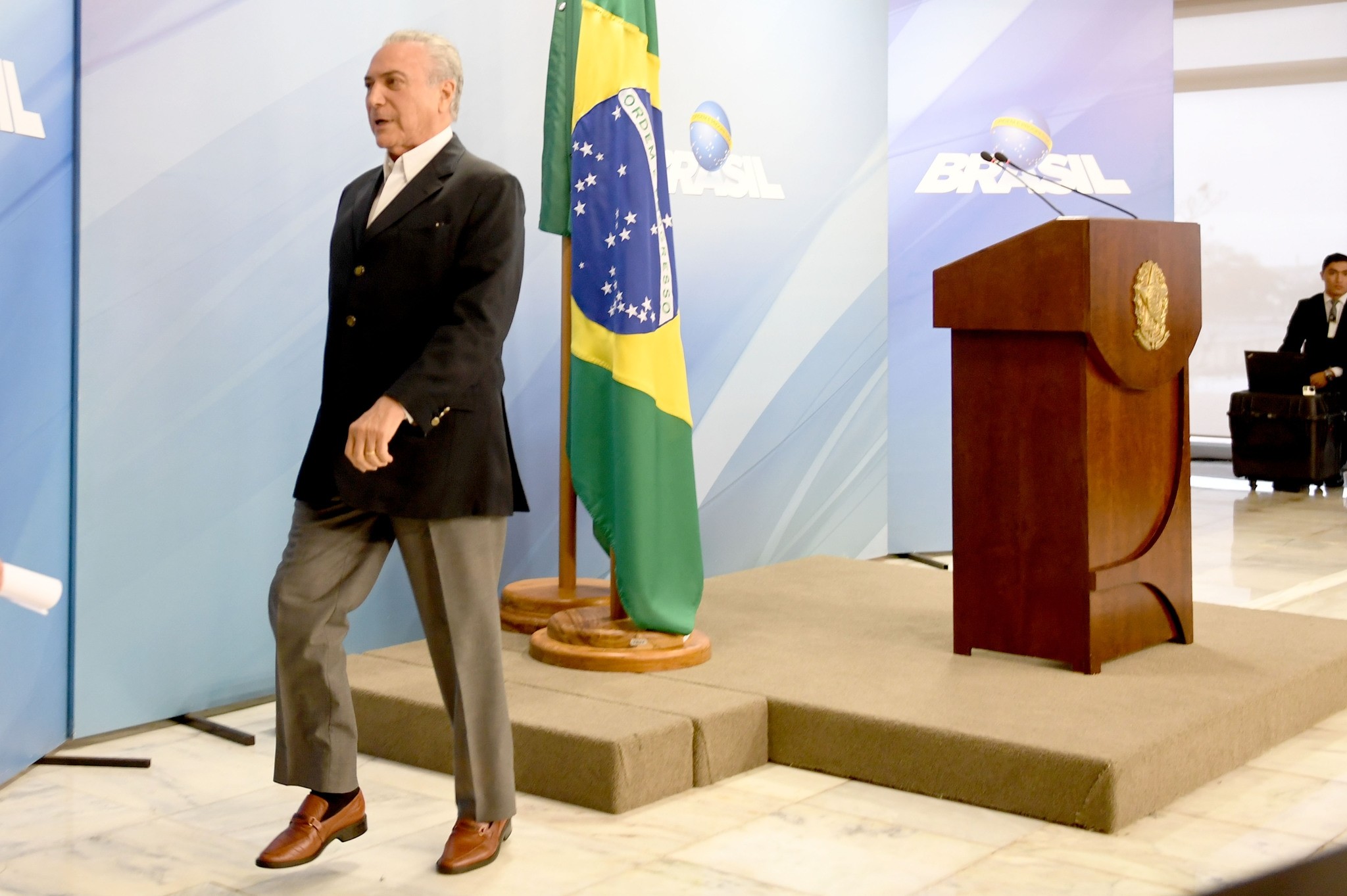 Brazilian President Michel Temer on Saturday demanded the Supreme Court suspend a probe into his alleged obstruction of justice, saying the central piece of evidence is flawed.

Temer said an audio recording purporting to show him discussing payment of hush money to a jailed politician had been "doctored."

Temer spoke in only his second public appearance since Wednesday's revelation of the audio recording, and the opening on Friday by the Supreme Court of a formal probe. The scandal has sparked calls for Temer's resignation or his impeachment in Congress.

Although Temer had already vowed to stay on and fight, his brief speech on national television Saturday was the first sign of a concerted counter-attack.

He branded the secretly recorded audio "manipulated and doctored" and again insisted he will not resign, saying his leadership is needed to see through economic austerity reforms.

"I will continue to lead the government," Temer said, touting signs that Brazil is finally inching out of its worst recession in history.

The "Car Wash" investigation has upended Brazil with scores of politicians indicted or subject to probes into alleged bribe taking and embezzlement.

At the heart of Temer's scandal is the conversation he had with an executive from the JBS meat packing business in which the president allegedly blesses monthly payments of hush money to jailed former lower house speaker Eduardo Cunha.

Cunha is in prison after a "Car Wash" judge convicted him of bribe-taking, but as a powerful insider he has long been rumored to be threatening to spill secrets on other politicians.

Temer's attack on the integrity of the recording -- which is often hard to hear -- appeared to be part of carefully planned resistance after two days of near silence from the government.

Two big newspapers, Estadao and Folha, first raised the question of whether the audio had been tampered with in articles Saturday that quoted forensic experts. Folha reported that an expert analysis of the tape found "more than 50 edits" of the recording.

- Keeping allies on side -

Although hugely unpopular with ordinary Brazilians, Temer has until now enjoyed a solid majority in Congress through his center-right PMDB party, the PSDB social democrats and a string of smaller parties.

He needs that alliance to hold if he is to avoid calls for his impeachment.

So far, major parties appear to be sitting on the fence. However, the small PSB party, which has one minister in the government, decided Saturday to pull out.

"At the top of our list is the immediate resignation of the president," Julio Delgado, a PSB deputy, told journalists.

In another ominous sign for Temer, the powerful Globo media group has turned fully against him with an editorial Friday declaring he "has lost the moral, ethical, political and administrative conditions to continue governing Brazil."

There was some good news for Temer, however.

Sao Paulo Mayor Joao Doria, a rising star of the PSDB party who is seen by many as a strong candidate for president in scheduled 2018 elections, told Folha newspaper there must be "good sense, balance, calm."

Doria said Temer's push austerity reforms are the priority. "The reforms have to survive," he said.

On Sunday, nationwide protests are planned by leftist groups and turnout will be closely watched as a gauge of the public mood.

Temer's crisis comes barely a year after he took over in controversial circumstances after the impeachment of leftist president Dilma Rousseff for illegally manipulating the government's accounts.

He was her vice president in an uneasy coalition between his PMDB and her Workers' Party, and took over automatically to serve out the rest of her term through 2018. Since then, Temer has radically changed the country's previously leftist path, bringing in market-friendly reforms.

If Temer had to leave office, Congress would pick a replacement to rule until after the 2018 elections.

However, there is widespread demand among Brazilians for advancing the 2018 polls and holding an immediate popular election. This would require Congress to approve a constitutional change.

The latest to demand snap elections was former leftist president Luiz Inacio Lula da Silva on Saturday. "We want Temer to leave but we don't want an indirectly elected president," he told supporters in Sao Paulo.