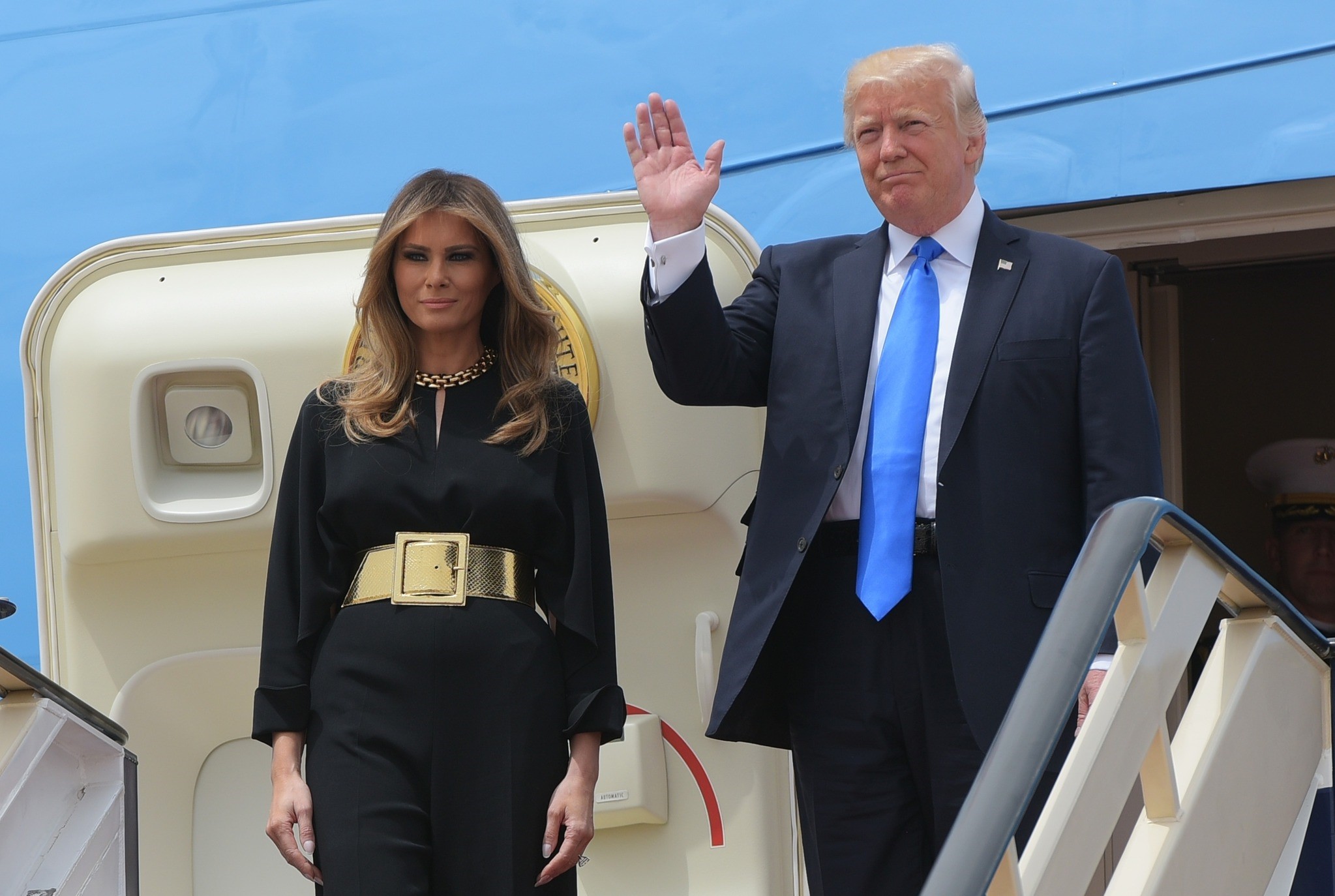 President Donald Trump and first lady Melania arrive for a welcome ceremony at the Royal Terminal of King Khalid International Airport, May 20, 2017, in Riyadh. (AFP Photo)
by May 20, 2017 12:00 am

What women wear can often be the focus of critique and controversy -- all the more so when the woman is an ex-model, married to the U.S. president and disembarking in Saudi Arabia.

The question of what first lady Melania Trump would wear on her husband's his first foreign trip echoes similar debates around Michelle Obama's decision to wear color -- blue and white -- and not cover her hair on a visit to ultra-conservative Saudi Arabia.

But with Trump's hawkish political profile, and the first lady's insider position in the world of fashion, buzz around what the president's wife would wear and whether that would include a headscarf was at a high in the hours before Air Force One touched down in Riyadh.

Melania Trump embarked on Marine One at the White House on Friday in a high-waisted midi pencil skirt in orange leather with a front split, a cream crewneck sweater with bows at the cuffs and a pair of sky-high nude Manolos. (Vogue swiftly identified the sweater as MaxMara and the skirt as tomato-red by Herve Pierre, the designer behind Melania's white inauguration gown.)

When she emerged at Riyadh's King Khalid International Airport the next morning, the first lady's attire was more conservative -- black patent stilettos and a black long-sleeved, wide-leg jumpsuit with a narrow slit down the neckline, cinched at the waist with a wide gold belt.

And like Michelle Obama, and Obama's predecessor Laura Bush, Melania Trump did not cover her hair.

Obama had earned praise for her decision not to cover her head, but Donald Trump at the time tweeted his disapproval.

"Many people are saying it was wonderful that Mrs. Obama refused to wear a scarf in Saudi Arabia, but they were insulted. We have enuf enemies," read a Jan. 29, 2015 tweet on Trump's personal account.

Many people are saying it was wonderful that Mrs. Obama refused to wear a scarf in Saudi Arabia, but they were insulted.We have enuf enemies

Trump's daughter and advisor Ivanka also did not have her hair covered when she emerged from Air Force One in a long-sleeved black-and-white maxi dress, holding her husband Jared Kushner's hand.

Anticipation around what Melania and Ivanka would wear during the visit had been building for days: Saudi Arabia is a religious state with some of the world's harshest restrictions on women.

Saudi Arabia's guardianship system prohibits women from driving and from studying or traveling without permission from a male guardian, in the form of a father, brother or husband. Women are also expected to wear long black abaya robes and cover their hair in public in Riyadh.

The country is at a potentially unprecedented crossroads, with its future identity at stake as economic and political interests have brought to the limelight longstanding gender norms.

Local media on Thursday quoted Saudi Arabia's foreign minister as saying authorities did not demand anyone adhere to any specific clothing regulations.

The U.S State Department's website says women who choose not to conform to wearing "a full-length black covering known as an abaya, and cover their heads... face a risk of confrontation by Mutawwa and possible detention/arrest" in Saudi Arabia.

The Mutawwa, which literally translates to "volunteers" from Arabic, are Saudi Arabia's Commission of the Promotion of Virtue and the Prevention of Vice, known as the "morality police".