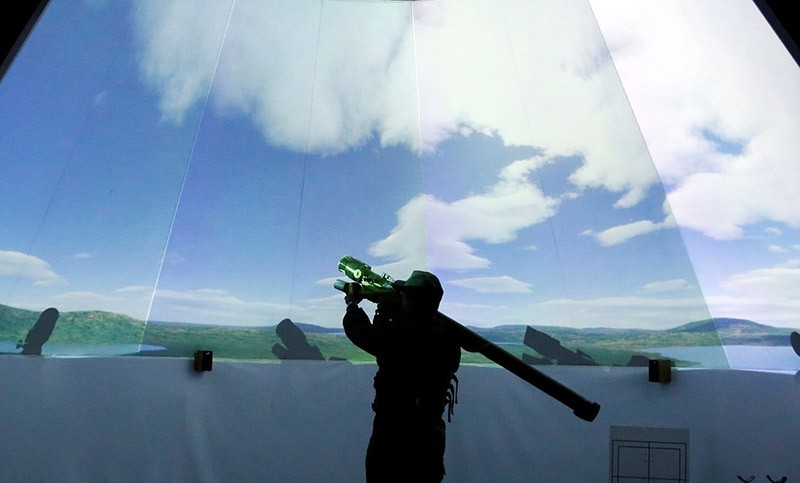 A Venezuelan soldier practises on an anti-aircraft artillery simulator as part of a defensive military exercise in conjunction with the general public in Caracas March 14, 2015 (Reuters Photo)
by May 22, 2017 12:00 am

Venezuela possesses 5,000 Russian-made MANPADS surface-to-air weapons, according to a military document reviewed by Reuters, the largest known stockpile in Latin America and a source of concern for U.S. officials amid the country's mounting turmoil.

Venezuela's socialist government has long used the threat of an "imperialist" invasion by the United States to justify an arms buildup. Much of that arsenal was obtained from Russia by Venezuela's late President Hugo Chavez, whose tenure lasted from 1999 until his death in 2013.

The missiles, which are shoulder-mounted and can be operated by one person, pose a serious threat to commercial and military aircraft. Weapons experts said there have long been fears that the weapons could be stolen, sold or somehow channeled to the wrong hands, concerns exacerbated by the current civil unrest in Venezuela and the economic crisis roiling the oil-producing nation.

According to a Venezuelan military presentation seen by Reuters, the South American country has 5,000 SA-24 Man-Portable Air-Defense System (MANPADS) missiles, also known as the Igla-S.

The document seen by Reuters provides a complete count to date of the size of the arms stockpile. Public weapons registries confirm the bulk of the numbers seen on the Venezuelan military presentation.

Venezuelan government and military officials did not respond to requests for comment about the report.

First deployed by the United States and the Soviet Union in the 1960s, shoulder-mounted missiles have become popular with insurgent groups around the world because they are portable, effective and relatively easy to operate.

The U.S. for years has funded efforts to destroy MANPADS stockpiles in unstable regions as worries have grown about the weapons getting into the hands of militant groups. Some missiles unaccounted for in Libya following the 2011 death of strongman Muammar Gaddafi, for example, are believed to have made their way to other parts of the Middle East.

U.S. Central Intelligence Agency (CIA) Director Mike Pompeo expressed concern about the Venezuelan missiles at a Senate hearing earlier this month, though he was clear that he had no evidence that arms transfers had taken place.

"This risk is incredibly real and serious ... to South America and Central America in addition to just in Venezuela," Pompeo said. "The situation in Venezuela continues to deteriorate. (Venezuelan President Nicolas) Maduro gets more desperate by the hour."

Conservative U.S. politicians such as Florida Republican Marco Rubio have long accused Venezuela of collaborating with a host of global militants, including Lebanese Shi'ite group Hezbollah and Colombia's FARC rebels, who are disbanding this year.

The Venezuelan government has long mocked such claims as lies used to justify potential foreign aggression.

Some intelligence experts agree the allegations are exaggerated.

"The whole Hezbollah line has been distorted for political purposes by the more extreme elements of the U.S. right wing," a former C.I.A. senior official told Reuters.

What's certain is that Venezuela is home to a thriving illicit weapons trade. Pistols, rifles, machine guns, even grenades are easily available on the black market and in the country's notoriously violent prisons. There are frequent reports of military and police officials stealing weapons.

Colombia has in the past accused Caracas of arming guerrillas with all manner of weaponry. Officials in neighboring Brazil have voiced concerns that local drug gangs may be acquiring military weapons from Venezuela, which has been rocked by seven weeks of anti-government protests.

A former Venezuelan senior army general and minister, who asked not to be named because of the sensitivity of the information, told Reuters the MANPADS missiles are held mainly on the coast due to government fears of a U.S. attack.

He told Reuters that Venezuela also holds 1,500 launchers, or grip stocks, which are fundamental to the operation of the missiles.

Venezuelan officials did not respond to a request for comment about the location and other details of its arsenal.

Venezuela's MANPADS missiles, similar to the U.S. Stinger system, were purchased towards the end of Chavez's rule.

The former paratrooper was briefly toppled in a 2002 coup endorsed by the United States.

The U.S. denied any pretensions to meddle in Venezuela, but Chavez warned his followers continually about the threat of American aggression up until his death.

"We don't want war," Chavez said on TV in 2009 as dozens of soldiers marched in front of him with camouflaged MANPADS missiles on their shoulders. "But we need our armed forces to be ever better trained and equipped to secure ... the sovereignty of this great nation."

Russia, a close ally, lent Venezuela $4 billion to buy weapons when Chavez visited Moscow in 2010. It is unclear if any MANPADS missiles were part of that deal.

The U.N. Register of Conventional Arms (UNROCA) and the Stockholm International Peace Research Institute (SIPRI) show the shipment of 3,800 MANPADS missiles from Russia to Venezuela over the last decade. Those records rely on voluntary reports and are often incomplete.

In 2009, then-U.S. Secretary of State Hillary Clinton asked Russian Foreign Minister Sergei Lavrov to stop selling MANPADS missiles to Venezuela because of concerns over the South American country's management of its weapons stockpiles, according to cables released by WikiLeaks.

That same year, Colombia said Sweden's government confirmed that three rocket launchers found in a FARC guerrilla camp in Colombia were part of a batch that Sweden had sold to Venezuela in the 1980s.

Internal FARC documents seized by Colombia during a 2008 raid in Ecuador appeared to show that the guerilla group entered into talks with Venezuela to obtain MANPADS missiles, though there was no evidence any weapons changed hands.

Venezuela did not respond to a request for comment on those documents.

Venezuelans have taken to the streets in recent weeks to protest the nation's collapsing economy and the Maduro government's efforts to solidify its hold on power. Millions are struggling with severe shortages of food, medicine, and other basics.

The government blames the problems on its political opponents and the United States.