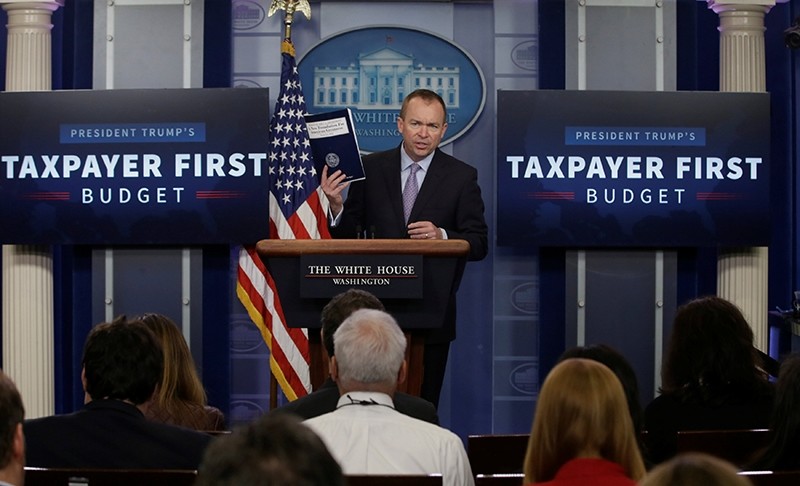 Office of Management and Budget Director Mick Mulvaney holds a briefing on President Trump's FY2018 proposed budget in the press briefing room at the White House in Washington, U.S., May 23, 2017 (Reuters Photo)
by Associated Press May 23, 2017 12:00 am

The poor and the disabled are big losers in President Donald Trump's $4.1 trillion budget proposal while the Pentagon is a big winner.

Defense spending and border security would get significant boosts.

The winners and losers:

The military: Trump's budget proposal would add $469 billion to defense spending over the next decade.

Border security: The proposal includes $2.6 billion for border security technology, including money to design and build a wall along the southern border. Trump repeatedly promised voters during the campaign that Mexico would pay for the wall, a notion that Mexican officials rejected. Instead, the U.S. taxpayer will foot the bill.

The elderly: Trump's budget plan does not address Social Security or Medicare benefits for retirees, even though both programs are on track to become insolvent in the coming decades.

New parents: The budget plan includes a new paid leave program for the parents of newborn children. Under the program, mothers and fathers could take up to six weeks of paid leave after the birth or adoption of a child. Trump's budget summary says the program is fully paid for but includes only $19 billion over the next decade.

Veterans: The budget proposal calls for an increase for the Veterans Administration, including $29 billion over the next decade for the Choice program. The program allows veterans to seek outside medical care from private doctors.

Medicare and Medicaid fraud prevention efforts would get a $70 million increase next year.

The Poor: Trump's budget would slash Medicaid and the Children's Health Insurance Program by $616 billion over the next decade. These programs provide health insurance for millions of poor families.

The Poor, Part II: Trump's budget would cut the food stamp program by $191 billion over the next decade.

The Poor, Part III: Trump's budget would cut funding for the Temporary Assistance for Needy Families (TANF) program by $22 billion over the next decade.

The Disabled: Trump's budget calls for cutting Social Security disability benefits by nearly $70 billion over the next decade by encouraging and, in some cases, requiring people receiving the benefits to re-enter the workforce.

College Students: Trump's proposal would cut student loans by $143 billion over the next decade.

Farmers: The budget plan would cut farm subsidies by $38 billion over the next decade.

Young Workers: By not addressing Social Security or Medicare benefits for retirees, Trump's budget increases the likelihood that young workers will eventually face either significant benefit cuts or big tax increases. Social Security's trust funds are projected to run dry in 2034 and Medicare's is projected to run out of money in 2028. If Congress allows either fund to run dry, millions of Americans living on fixed incomes would face steep cuts in benefits.

The Centers for Disease Control and Prevention: The agency, which fights everything from AIDS to Zika, would have its budget cut about 18 percent, to $6.3 billion.

The National Institutes of Health: The budget for the premier medical research agency would be cut by 18 percent, to $26 billion.