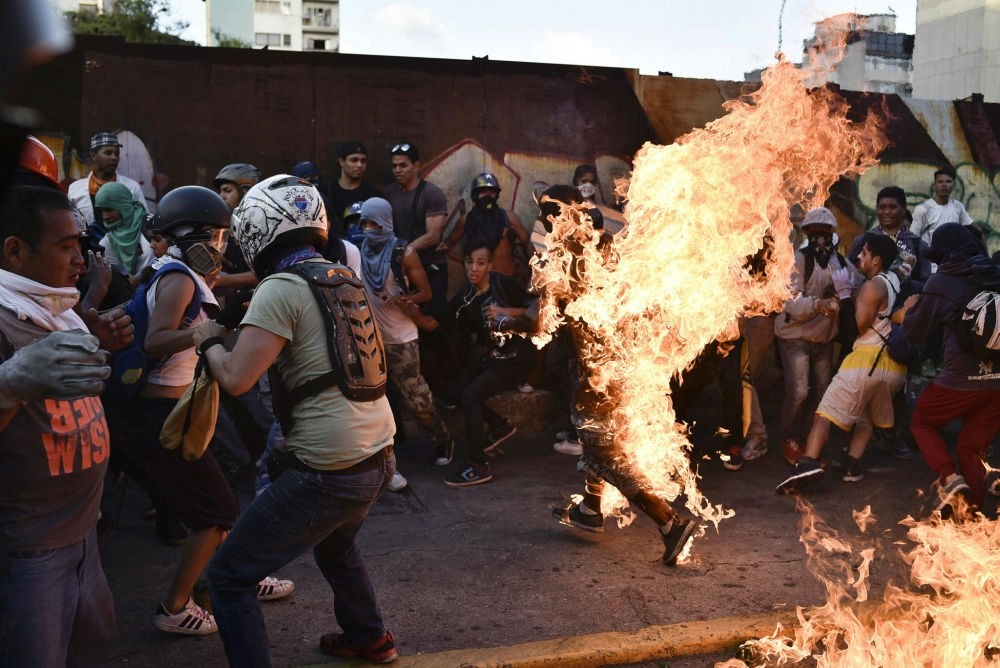 Opposition demonstrators set an alleged thief on fire during a protest against the government of President Nicolas Maduro in Caracas on May 20.
by Angelos Berberakis May 23, 2017 12:00 am

While many dozens have died in recent months amid anti-government protests in Venezuela, the most striking event has been the recent images seen of a man surrounded by protesters and burned alive without succumbing to his wounds as other members of the crowd rushed in to save his life.

While eyewitness accounts vary, some are saying that the burning victim in recent Venezuelean protests was a thief with others claiming that he had proclaimed himself to be a "chavista," or affiliate of Nicolas Maduro's socialist government.

Hugo Chávez, Maduro's predecessor, ruled the South American nation from 1999 until his death in 2013 and radically changed the power structure in the country.

Despite the latest surge in violence, Venezuela was already a hot spot for bloodshed, with government statistics showing up to an average of 60 homicides being committed per day. Politically motivated lynchings have also become commonplace, resulting in the deaths of one person every three days. In the last two months of civil unrest, 47 people have died. Some were anti-Maduro protesters, others were pro-government while some were innocent bystanders and members of the security forces.

This violence has not failed to reach the shores of Florida, where video footage seemingly shows a former minister attempting to set a bakery on fire in a city heavily populated by anti-government Venezuelans.

Maduro, with approval ratings around 20 percent, has actually driven the country toward major economic difficulties despite Venezuela's abundant natural resources, including the largest oil reserves on that side of the hemisphere. Venezuela technically has the potential to become wealthier than the oil-exporting nations of the Arabian Peninsula. Aside from all the other resources present in the country, the nations of the Americas would definitely prefer to import oil from Venezuela rather than from the Middle East due to seemingly perpetual wars and significant risks of piracy in the Gulf of Aden. All things being equal distance alone would make it more cost effective to import oil from a nation within the region.

Venezuela's monocultured economy however, which is centered around oil exports, means that it's got no choice but to heavily rely on foreign investment more than ever due to the fact that oil prices per barrel have gone down significantly since 2008, from over $150 per barrel to about $50 today.

Constant nationalizations under Chavez and now Maduro have also crippled local businesses and industries, and have also negatively affected even providers of public utilities, to a great extent.

Under Chavez, even though the country made significant achievements in terms of quality of living conditions and human development, these achievements did not translate into long-term efficiency and now the populace is not-so-slowly but surely descending into third world conditions. Millions of Venezuelans are struggling with severe shortages of food, medicine and other primary basics.

Some parts of the country have been put under martial law in order to prevent looting.
RELATED TOPICS