Millions of Americans on streets waiting for total solar eclipse 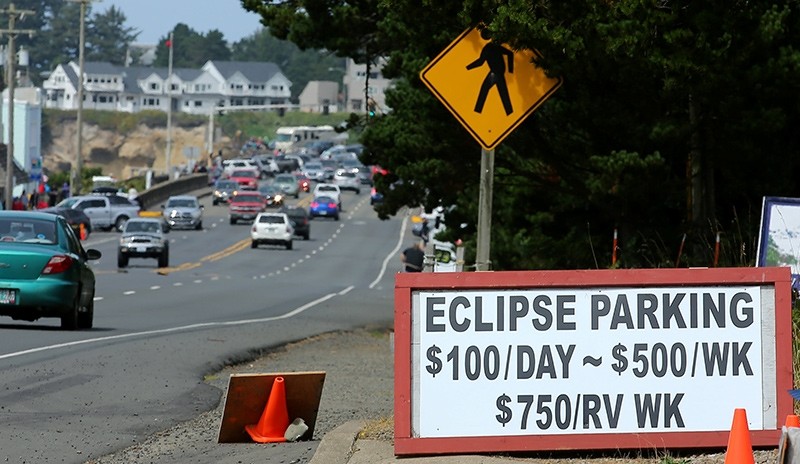 An Entrepreneurial sign for parking is displayed for drivers as they near the small town of Depoe Bay, Oregon as it prepares for the coming Solar Eclipse, August 20, 2017 (Reuters Photo)
by Compiled from Wire Services Aug 21, 2017 12:00 am
Millions of Americans armed with protective glasses are taking positions along a slender ribbon of land cutting diagonally across the United States to marvel at the first total solar eclipse to unfold from coast to coast in nearly a century.

After weeks of anticipation, the sight of the moon's shadow passing directly in front of the sun, blotting out all but the halo-like solar corona, will draw one of the largest audiences in human history, experts say.

When those watching via social and broadcast media are included, the spectacle will likely smash records.

Some 12 million people live in the 70-mile-wide (113-km-wide), 2,500-mile-long (4,000-km-long) zone where the total eclipse will appear on Monday. Millions of others have traveled to spots along the route to bask in its full glory.

Murphy, North Carolina, in the Smoky Mountains about two hours north of Atlanta, is among hundreds of small towns that are preparing for a huge influx of visitors.

"The weather forecast for Monday is beautiful, probably not a cloud in the sky all day," said Dave Vanderlaan, 61, a retired landscaper. "We're busy, but tomorrow anybody in Atlanta who says they want to see total, they're going to come up to this area, so it could be crazy."

The "Great American Eclipse," as it is being called, will move diagonally across the country, northwest to southeast, providing a spectacular solar show -- again, weather permitting -- and an excellent excuse for scores of eclipse-viewing parties and music festivals.
Last Update: Aug 21, 2017 9:07 am
RELATED TOPICS