US to limit visas from Cambodia, Eritrea, Guinea and Sierra Leone for refusing to take deportees 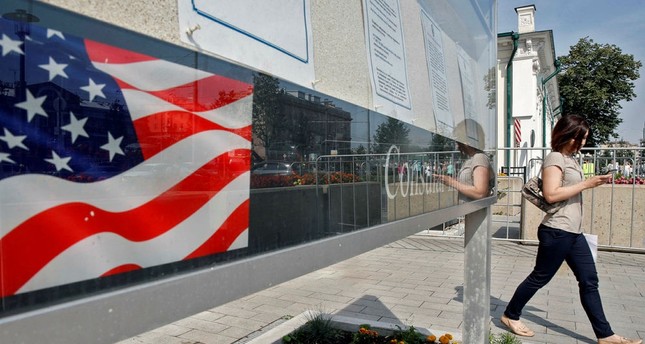 A woman walks by a board with consular information outside the US embassy in Moscow on August 22, 2017. (AFP Photo)

The U.S. government is poised to impose visa restrictions on four Asian and African nations refusing to take back their citizens who've been deported from the United States, officials said Thursday.

The officials said Cambodia, Eritrea, Guinea and Sierra Leone would soon be subject to sanctions. They're meant to coax "recalcitrant" countries into accepting the return of individuals the U.S. tries to remove. Under federal law, Secretary of State Rex Tillerson can stop all or specific types of visas from being issued to such nations.

Tillerson isn't likely to ban all visas, the officials said. Rather, he would target government officials and their families, as the U.S. has done previously. The officials were not authorized to discuss the matter publicly and spoke on condition of anonymity. They wouldn't say when Tillerson would act.

The Homeland Security Department said Wednesday it had recommended the State Department take action against four nations out of a dozen it considers recalcitrant. The agency didn't name the countries.

Asked for comment, the State Department confirmed it received the Homeland Security Department's notification. It also wouldn't identify the nations by name, saying only that each one has "refused to accept or unreasonably delayed the return of its nationals." It will make public the exact penalties after affected governments are informed.

"Our goal is to get countries to agree to accept the return of their nationals," DHS spokesman Dave Lapan told reporters.

The State Department has been traditionally reluctant to impose visa sanctions because affected countries often retaliate through reciprocal restrictions on U.S. citizens and officials. The measures have only been imposed twice before, against Guyana and The Gambia.

It was not immediately clear why only Cambodia, Eritrea and Guinea were selected for the sanctions or why Sierra Leone, which was last identified as "at risk" for recalcitrance, was included.

Share on Facebook Share on Twitter
Previous in Americas 'I'm a Nazi:' Self-proclaimed Nazi Canadian verbally abuses Muslim... Next in Americas One person was killed and a gunman was injured after he stormed into...
DAILY SABAH RECOMMENDS