Violence erupts again in US as protesters clash with police 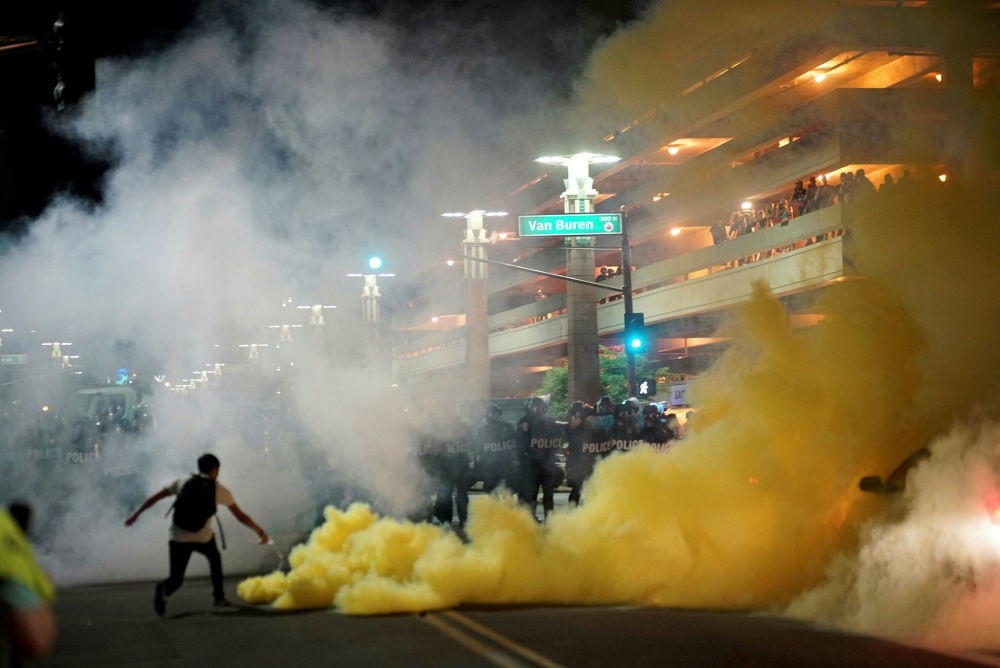 Police use tear gas to disperse demonstrators after a Trump campaign rally in Phoenix, Arizona, Aug. 22.
by Compiled from Wire Services Aug 24, 2017 12:00 am

Police fired pepper spray to disperse protesters outside a rally by U.S. President Donald Trump in Phoenix, Arizona, on Tuesday after being pelted with rocks and bottles, police said.

Police have not given an estimate of the number of protesters, but Arizona media said there were several thousand. Police did not say whether the pepper spray was used on pro- or anti-Trump protesters, or both.

"Police have responded with pepper balls and OC [oleoresin capsicum] spray in an attempt to disperse the crowd and stop the assaults," he said.

Minor scuffles and shouting matches erupted earlier between protesters and Trump's supporters on Tuesday with authorities on high alert as thousands of people lined up in the triple-digit heat to attend his first political rally since the violence in Charlottesville, Virginia.

Phoenix police kept most members of the two opposing groups behind barricades and apart on separate sides of the street. As a police helicopter hovered overhead, officers wearing riot gear and carrying rifles sauntered through the lane between the sides.

Local authorities were vigilant in the aftermath of the deadly protests in Virginia and the president's comments last week about both sides having blame for violence at the white supremacist rally. Mayor Greg Stanton had unsuccessfully called on the president to not hold the rally here so soon after the trouble in Charlottesville.

Trump again defended his response to the violence in Charlottesville at a rally in Arizona, and he threw in a promise to shut down the U.S. government if necessary to get a wall built along the border with Mexico.

U.N. human rights experts called on the United States and its leadership on Wednesday to "unequivocally and unconditionally" condemn racist speech and crimes, warning that a failure to do so could fuel further violent incidents.

The "early warning and urgent action" statement, reserved for serious situations, was issued by the U.N. Committee on the Elimination of Racial Discrimination (CERD), although it stopped short of criticizing U.S. President Donald Trump by name.

Trump drew widespread condemnation when he blamed both sides for violence that broke out at a rally in Charlottesville, Va., organized by neo-Nazis and white nationalists. One woman, Heather Heyer, was killed after a man linked to the white nationalists drove his car into a crowd of counter-protesters.

The U.N. experts said the alleged perpetrators of the violence should be prosecuted and, if convicted, punished with sanctions commensurate with the gravity of the crime. U.S. officials should also "address the root causes of the proliferation of such racist manifestations, and thoroughly investigate the phenomenon of racial discrimination ..., " the experts added. They should ensure that freedom of expression, association and peaceful assembly "are not exercised with the aim of destroying or denying the rights and freedoms of others". The United States is among 177 countries to have ratified the U.N. pact against racial discrimination. The panel monitors compliance and reviews countries' records every few years.