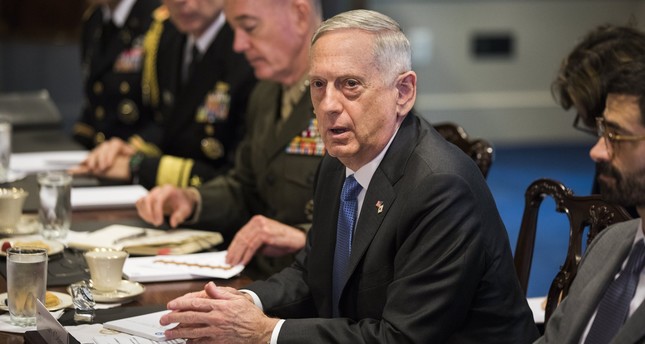 "The U.S. has been talking to North Korea, and paying them extortion money, for 25 years. Talking is not the answer!" Trump wrote on Twitter earlier Wednesday.

But hours later, Trump's defense chief told reporters at the Pentagon the U.S. is "never out of diplomatic solutions.

"We continue to work together, and the minister and I share a responsibility to provide for the protection of our nations, our populations and our interests, which is what we are here to discuss today," he said during a meeting with South Korean Defense Minister Song Young-moo.

"There is already very strong collaboration, we always look for more, we are never complacent," he added.

The test was meant to send a message the reclusive state might also send projectiles near Guam as it threatened earlier this month. The Pacific island is home to some of Washington's most powerful military hardware.

Trump said Tuesday that "all options are on the table" as Seoul is pushing to boost South Korea's defenses following phone talks between its National Security Office chief Chung Eui-yong and his U.S. counterpart, H.R. McMaster.

A statement from Seoul's presidential office confirmed that shortly after the North's latest test was detected, South Korea discussed deploying American strategic assets to the peninsula so the South does not have to rely on powerful hardware being scrambled from Guam, such as B-1B bombers.

Other assets that could bolster South Korea include B-52 bombers, guided missile destroyers, nuclear-powered submarines and aircraft carriers.

Neither Mattis nor Song would address possible deployments of U.S. military equipment.

Share on Facebook Share on Twitter
Previous in Americas An Ecuadorean judge has jailed 20 Chinese fishermen for up to four... Next in Americas Total economic losses from Tropical Storm Harvey could be as high...
DAILY SABAH RECOMMENDS