6.1M homes, businesses in Florida still have no power after Irma 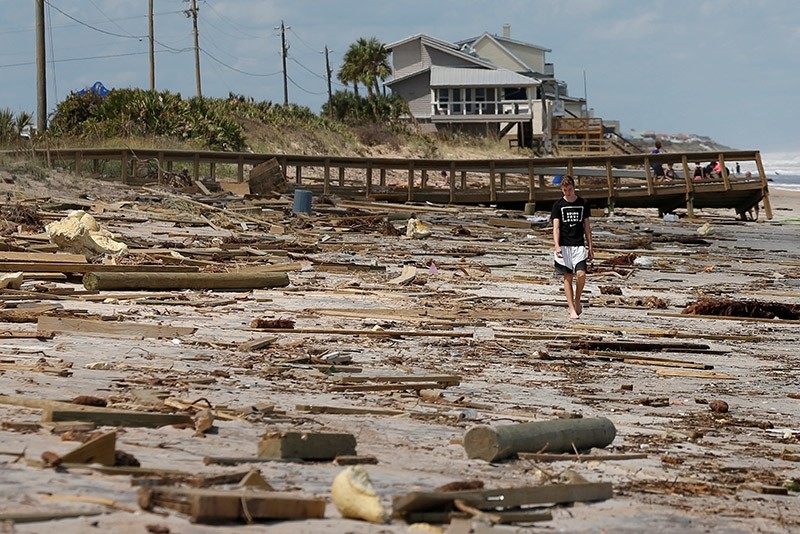 Some 6.1 million homes and businesses in Florida and nearby states still had no power on Tuesday after the pummeling from Hurricane Irma, as utility companies scrambled to get the lights back on in one of the biggest power restoration efforts in U.S. history.

Fuel shortages in the state also eased as 37.6 percent of gas stations were without fuel statewide, down from 46 percent Monday evening, according to fuel information service GasBuddy.

Major utilities in Florida - including NextEra Energy Inc's Florida Power & Light, Duke Energy Corp and Emera Inc's Tampa Electric - have mobilized tens of thousands of workers to deal with the outages after Irma landed early Sunday and carved a destructive path up Florida, which has a population of about 20 million.

FPL, the state's largest utility, said its outages dipped to around 2.8 million customers by Tuesday morning from a peak of more than 3.6 million on Monday morning, but that was still more than half of its customers.

In total about 4.5 million FPL customers were affected by the storm, with more than 1.7 million having their service restored already, mostly by automated devices.

"We restored power to about 40 percent of the customers impacted by Irma in just one day," FPL spokesman Rob Gould told a news conference on Tuesday. By comparison, only 4 percent of 3.2 million customer outages following Hurricane Wilma in 2005 were addressed in the same time.

The faster restoration time was due to $3 billion FPL spent on improvements including underground lines, concrete poles and intelligent devices to help restore power, Gould said.

More than 60,000 workers from across the United States and Canada were involved in the restoration efforts, including those from the affected companies and other utilities, said Tom Kuhn, president of the Edison Electric Institute, an industry trade group.

"The industry's Irma response is one of the largest power restoration efforts in U.S. history," Kuhn said.

The state's gas supplies were severely disrupted before and during the storm as ports were closed, cutting Florida off from waterborne deliveries the state relies on. As ports began to reopen, queues of tanker trucks waited to be refilled.

Gainesville and Miami had the highest number of stations out of fuel on Tuesday afternoon, with 62 percent and 49 percent respectively, according to GasBuddy.

It was too soon to say what the power restoration would cost FPL, but in 2016, the company said it spent about $315 million to restore power after Hurricanes Hermine and Matthew, according to NextEra's federal filings.

Most of those costs were related to Matthew, which caused a third as many outages as Irma did for FPL.

To recover restoration costs, FPL files with state regulators and, if approved, adds a storm surcharge on the monthly bills of its nearly 5 million customers.

That surcharge was capped at around $4 per month for the average residential customer, according to NextEra's 2016 annual report. The company said, however, it could request an increase if storm restoration costs exceed $800 million in any calendar year.

Florida's second biggest power company, Duke, serving the northern and central parts of the state, said it still had about 1.2 million outages Tuesday morning, according to the company's website, while Duke's outages in North and South Carolina climbed to about 160,000.

In Georgia, utilities reported around 1.2 million customers without power Tuesday morning, down from a peak of more than 1.4 million on Monday night.