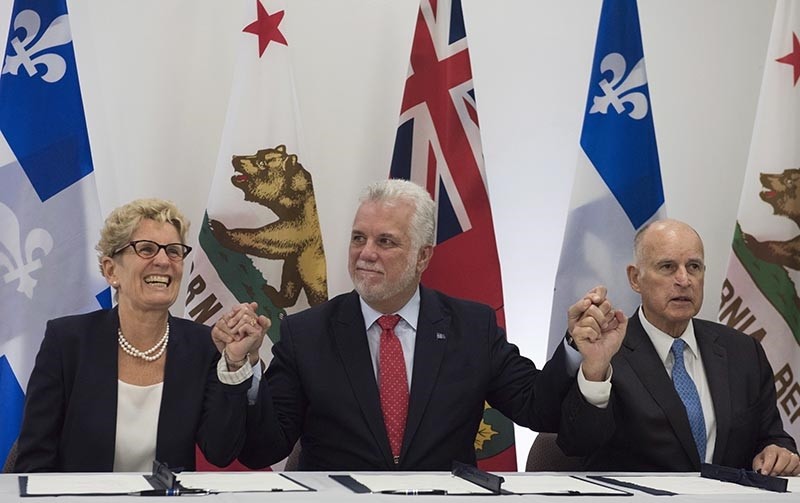 California on Friday expanded its market for buying and trading permits to emit greenhouse gases to include the Canadian province of Ontario.

The market is the centerpiece of California's cap-and-trade program, which aims to reduce carbon pollution over time by capping emissions and requiring companies to obtain permits to pollute. Quebec is already part of the market.

California is aiming to reduce emissions by 40 percent from 1990 levels by 2030. The two Canadian provinces have similar or stricter goals.

California Gov. Jerry Brown signed the agreement Friday in Quebec at a meeting with officials of both provinces, capping off a weeklong trip to the East Coast and Canada to promote the state's climate change-fighting policies.

Earlier in the week, he touted a 15-state alliance to achieve the United States' goals in the international Paris climate agreement despite President Donald Trump's plan to withdraw. A report commissioned by the alliance showed participating states on track to reduce emissions 24 to 29 percent below 2005 levels by 2025.

Linking the carbon markets means companies in all three states and provinces can trade carbon allowances and offsets, which allow them to pollute if they commit to reducing carbon elsewhere. Oil refineries, ports and other polluters participate in the auctions, and many polluters are given some free allowances by the state.

Auctions are held four times a year. In California, money raised pays for high-speed rail and other projects, including a recently approved plan to provide rebates to those who buy electric cars.

The most recent auction, in August, brought in $640 million.