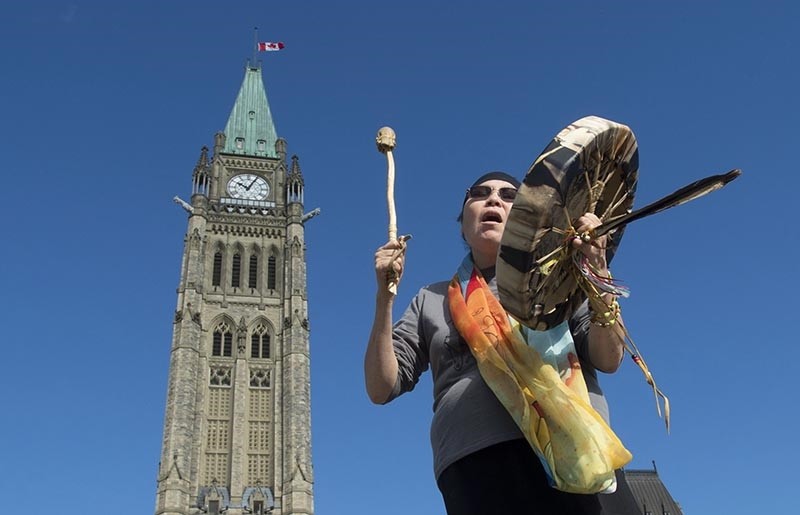 In this Oct. 6, 2017 file photo, Marcia Brown Martel plays her drum and sings outside Parliament following a government news conference announcing a compensation package for indigenous victims of the ,Sixties Scoop, (AP Photo)
by Nov 01, 2017 12:00 am

A Canadian inquiry into missing and murdered indigenous women said Wednesday their numbers are "likely much higher" than previous estimates as investigators continue to probe the reasons behind the "ongoing national tragedy."

Indigenous women represent 4 percent of Canada's female population, but made up nearly one-quarter (24 percent) of homicide victims in 2015.

While the current probe is yet to publish its conclusions, the phenomenon has previously been linked to endemic poverty, racism, sexism and other social ills traced back to failed attempts by early colonizers to force indigenous people to integrate.

According to official estimates, almost 1,200 women and girls went missing or were killed between 1980 and 2012. The majority of the perpetrators who were caught were known to their victims.

But Marion Buller, the inquiry's chief commissioner, said Wednesday even that figure was probably too low.

"With all the information we have, we still don't know how many indigenous women and girls are missing or have been murdered," she said in an interim report.

Buller concluded that "because of difficulties with the data behind the statistics, definitions and identification, and errors in reporting, the real number of missing and murdered indigenous women and girls is likely much higher."

Buller, who has spent months hearing from experts and families of victims, added: "It has traumatized generations of families, and it will continue to traumatize communities if we do not commit to action and change," she said.

The interim report does not make new findings or recommendations.

Rather, it rehashes many of the hundreds of findings and recommendations from 98 past public inquiries, inquests, commissions, human rights complaints and independent reports on the plight of Canada's indigenous peoples, which have been largely ignored.

The report agrees with the conclusions of the others that violence against indigenous women is "rooted in colonization."

It also highlights past calls for changes to Canada's child welfare system and policing in order to better serve indigenous peoples, including more thorough investigations into indigenous women's deaths and disappearances.

Buller acknowledged the government's attempts at reconciliation with Canada's indigenous peoples (whose numbers nearly doubled to 1.6 million or 4.9 percent of the population in the decade to 2016, according to the last census), as well as funding boosts for aboriginal education, housing and social programs.

But she said these commitments "fall short of indigenous communities' needs."

A final report on improving native women's safety and ways to commemorate the dead was to be released in 2018.

But the commission has asked for more time to complete its work, saying it has been plagued by operational issues.

Prime Minister Trudeau said he would "read carefully" the interim report before making any decisions.