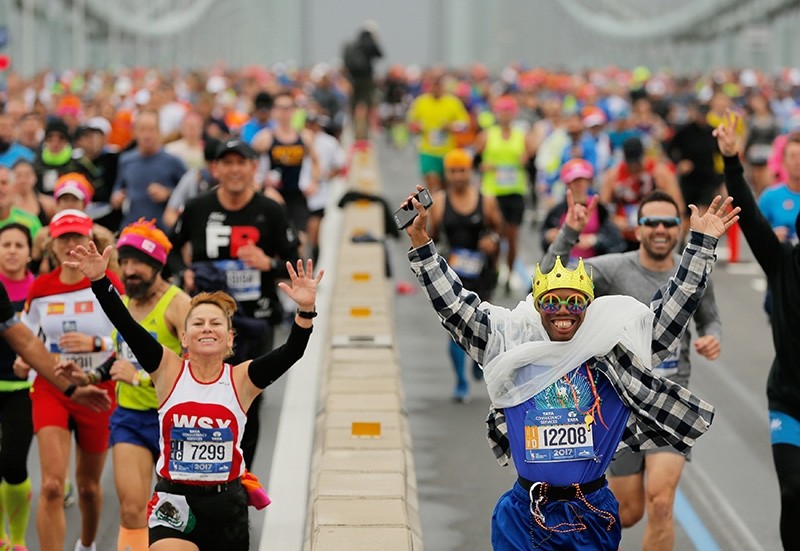 The first wave of runners make their way across the Verrazano-Narrows Bridge during the start of the New York City Marathon in New York, U.S., November 5, 2017 (Reuters Photo)
by Daily Sabah with AFP Nov 05, 2017 12:00 am

Five days after the worst attack on New York since September 11, 2001, the city was staging a show of defiance Sunday, with some 2.5 million people packing the streets to cheer on 50,000 marathon participants from around the world.

The day after an Uzbek man killed eight people and wounded 12 others in Manhattan near the 9/11 Memorial, Mayor Bill de Blasio had vowed that the race would go on, adding that New Yorkers would "not be cowed."

Sunday he told ABC that "this event is life-affirming every year, but this year [it is] even more powerful."

The annual New York Marathon is the largest in the world, with a course running through all five boroughs of the city.

Security had already been boosted in 2013 after the Boston marathon attack that saw two youths of Chechen descent plant two bombs near the arrival line, killing three people and wounding more than 250 others, including spectators.

The Daesh terrorist group has described Sayfullo Saipov – the 29-year-old man charged with driving a rented pickup truck down a bike path in Manhattan as children and their parents prepared for Halloween – as one of their own, prompting President Donald Trump to call for his execution.

As Sunday's marathon began, New Yorkers said they were coming together in defiance in the aftermath of the latest attack to strike America's most populous city.

In the women's race, Shalane Flanagan bested Mary Keitany of Kenya, becoming the first American to win since 1977. Flanagan was the 2008 Olympic silver medalist in the 10,000m, but Keitany was stiff competition, having won the New York marathon the past four years.

"What I do know, 100 percent, is that we're a very resilient nation and I don't think there are many tougher people than New Yorkers, and marathoners are pretty tough too," Flanagan said before the race.

"So I think it's an opportunity to show resilience and strength and coming together. And when you come together as a community it really empowers people and helps people heal."