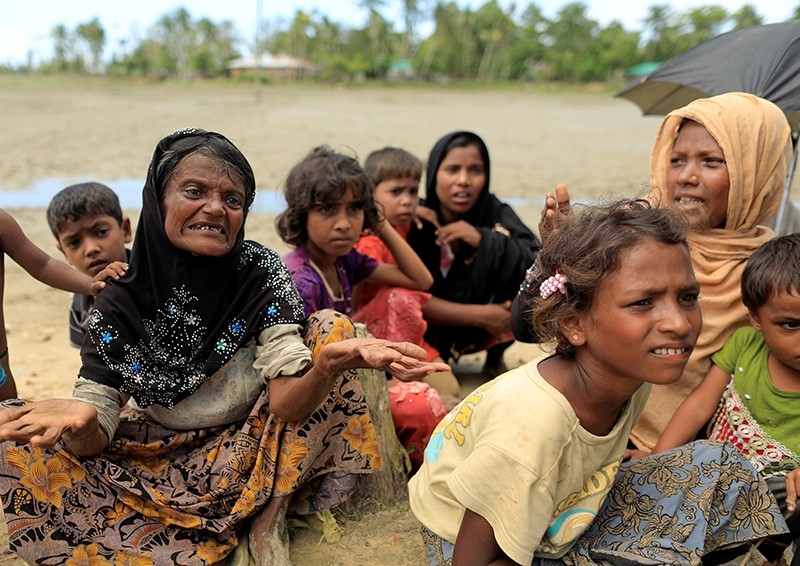 Hamida, 65, a Rohingya refugee, who fled from Myanmar a day before, reacts after she along with other newly arrived refugees, spent a night waiting to be allowed to walk to a relief centre in Teknaf, near Cox's Bazar in Bangladesh (Reuters Photo)
by Anadolu Agency Nov 10, 2017 12:00 am

Bob Rae attended the meeting between the two leaders who are in Danang, Vietnam, for the 21-member Asia-Pacific Economic Cooperation summit.

The 45-minute session was arranged to talk about the continued massacre of the Rohingya in the predominately Buddhist country of Myanmar.

More than 611,000 Rohingya have crossed from Myanmar's western state of Rakhine into Bangladesh since late August, according to the U.N.

Rae, who arrived in the region late last month to get a first-hand look at the situation, told reporters after the meeting Friday, Trudeau expressed his dismay at the level of violence.

"From my point of view that was extremely important for her to hear, directly from Canada's prime minister," Rae said.

Critics have demanded Suu Kyi do a lot more to end what the U.N. and Canadian Foreign Affairs Minister Chrystia Freeland have called the "ethnic cleansing" of the Rohingya.

"From her perspective, she's doing what she can in a difficult circumstance," Rae said of Suu Kyi. "I think it's fair to say that we feel more needs to be done and more could be done."

Rae said the issue would be raised at the United Nations General Assembly, although he was not specific as to when that would happen.

"These are not judgments that are unique to Canada, we are not alone in raising these questions," Rae said.

Turkey has been at the forefront of providing aid to refugees who live in squalor in camps in Bangladesh and President Recep Tayyip Erdoğan has raised the issue at the U.N.

Described by the U.N. as the world's most persecuted people, the Rohingya have faced heightened fears of attack since dozens were killed in communal violence in 2012.

Following attacks on border posts in Rakhine's Maungdaw district in October 2016, security forces launched a five-month crackdown in which, according to Rohingya groups, around 400 people were killed.

The U.N. has documented mass gang rapes, killings-including that of women and children-brutal beatings and disappearances committed by security personnel and has said the violations may constitute crimes against humanity.