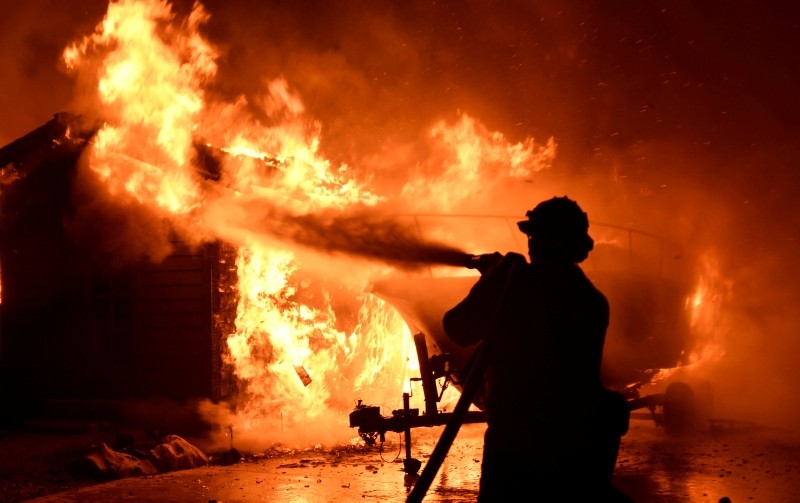 Firefighters battling wildfires throughout the U.S. West that have torched hundreds of homes got some help from the weather Saturday, even as they tallied damage from new fires that erupted amid a Southern California heat wave.

A fire on the California-Oregon border that destroyed 40 buildings and claimed at least one life since Thursday remained virtually out of control, but a National Weather Service warning of extreme fire danger from heat and winds expired Friday.

In the south, a wind-driven fire that erupted Friday night burned an estimated 20 structures, including homes, and forced evacuations in the Santa Barbara County community of Goleta, authorities said.

"It's really given us a good opportunity to get in there and get some work done," Zaniboni said, cautioning that critical fire weather warnings would remain in effect until the evening. 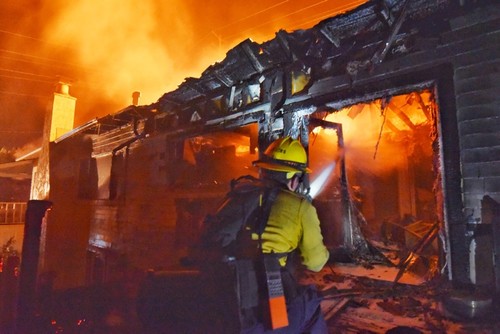 As some houses smoldered, a few residents who hadn't left or had managed to return surveyed damage that seemed random: destroyed homes next to others completely intact.

Eric Durtschi stood outside his destroyed house, where a burned-out car stood in the driveway and kids' bicycles were strewn about.

Durtschi, his wife and six children had left Utah and moved in just a few weeks ago. He said he hadn't yet told his two oldest children their home was gone. He managed to collect his severely burned vintage guns, hoping to salvage them.

Meanwhile, a neighbor across the street saw his home spared. The man had stayed through the night spraying down other people's houses.

The area is west of where the Thomas Fire raged last December. That blaze destroyed more than 1,000 buildings in Ventura and Santa Barbara counties.

East of Los Angeles in the San Bernardino National Forest, authorities ordered the evacuation of the community of Forest Falls, which has about 700 homes, as a quick-moving wildfire swelled to 1,000 acres (about 1.5 square miles).

In San Diego County, several fires erupted including one that burned at least five homes and perhaps many more in Alpine, in foothills not far from San Diego. Gov. Jerry Brown declared a state of emergency for the county.

At a Red Cross shelter, Ben Stanfill told the San Diego Union-Tribune that he and other relatives helped evacuate his mother's house, even though it wasn't in a mandatory evacuation area.

"We just grabbed everything you can't replace or re-buy," Stanfill said. "My grandma's photographs, the cat, my sister's Mickey Mouse teddy bear she's had since she was little."

The fire was only 5 percent contained Friday night, but crews had virtually stopped its growth and were focusing on knocking down hotspots that continue to threaten houses and mobile homes, state fire officials said.

Another fire on the Camp Pendleton Marine base prompted the evacuation of 750 homes.

The new blazes came as Southern California saw many areas top 100 degrees (38 degrees Celsius) Friday and more than a dozen got record-breaking temperatures for the day. The Weather Service forecast called for continued hot weather for much of the area Saturday.

In the north, the fire in Siskyou County on the Oregon border had virtually emptied the tiny communities of Hilt and Hornbrook. Fire officials called for immediate evacuation of some Oregon areas near the community of Colestin.

"We know we've lost homes and lots of structures, including livestock and horses as well," said Ray Haupt, chairman of the Siskiyou County Board of Supervisors.

The body of a resident was found Friday morning in the charred ruins of a Hornbrook home, but authorities were struggling to identify the body.

"We don't even have an address because of the devastation around the area," Siskyou County sheriff's Lt. Jeremiah LaRue told the San Francisco Chronicle.

No more deaths were expected, however.

"We're actually pretty hopeful everyone got out," LaRue said. "We've been talking to people who evacuated, and no one's missing right now, so that's good."

Elsewhere in California, a massive blaze northwest of Sacramento that began June 30 had destroyed 10 homes and other buildings but was 42 percent contained, officials said.

California was one of several Western states where recent wildfires have destroyed homes and forced thousands of people to evacuate.

A Utah wildfire that burned 90 structures and forced evacuation of more than 1,100 people in a mountain area near a popular fishing reservoir was growing Friday, but fire officials hoped to increase containment soon.

The blaze had burned about 75 square miles and was 4 percent surrounded.

In Colorado, rain helped slow the growth of wildfires that burned dozens of homes. But the threat of a deluge raised the possibility of flooding in the area of a stubborn blaze in the southwestern corner of the state.

Officials issued a flash flood watch for the 85-square-mile (220-square-kilometer) area burned by a fire that started June 1. They said it was just smoldering, and rain over the coming days should keep it from spreading.

Rain helped calm a fire in the heart of ski country that has destroyed three houses, including the home of a volunteer firefighter battling the flames near the resort town of Aspen. Gov. John Hickenlooper visited the area Friday.

It also offered relief in the southern Colorado mountains where a blaze destroyed over 130 homes and forced the evacuation of at least 2,000 properties. The Spring Creek Fire became the third-largest in state history at 165 square miles (427 square kilometers).