US arrests Russian woman for acting as Moscow agent 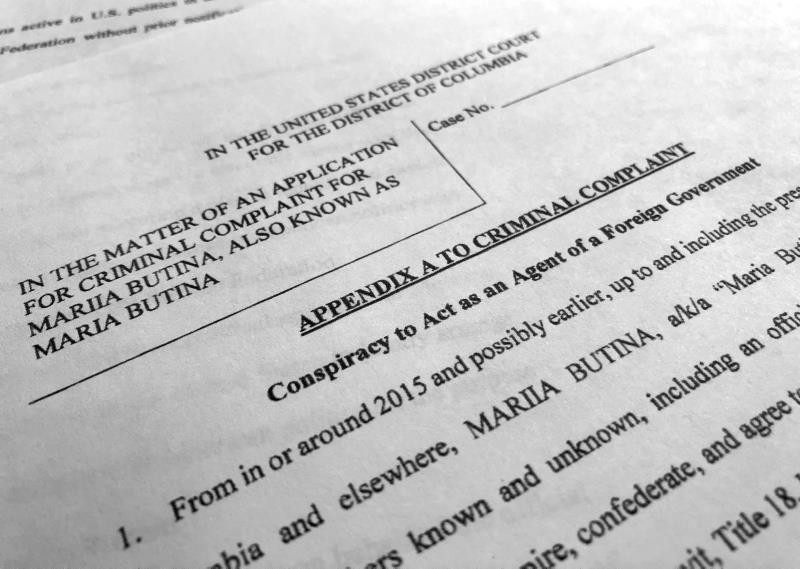 Court papers unsealed July 16, 2018, photographed in Washington, shows part of the criminal complaint against Maria Butina. She was arrested July 15, on a charge of conspiracy to act as an unregistered agent of the Russian government. (AP Photo)
by Compiled from Wire Services
Jul 16, 2018 12:00 am

A 29-year-old Russian woman living in Washington has been arrested and charged with conspiracy to act as an agent of the Russian government while developing ties with American citizens and infiltrating political groups, the U.S. Justice Department said on Monday.

Maria Butina, a student at American University and a founder of the pro-gun rights Russian advocacy organization Right to Bear Arms, is accused of working at the direction of a high-level official who worked for the Russian Central Bank and was recently sanctioned by the U.S. Treasury's Office of Foreign Assets Control, the Justice Department said in a statement.

The court records do not name the official. The person is described as a member of the Russian legislature who later became a top official in the country's central bank. Prosecutors also note that the official has since been sanctioned by the U.S.

However, she is pictured in numerous photographs on her Facebook page with Alexander Torshin, the deputy head of Russia's Central Bank, and a person familiar with the matter confirmed to Reuters that she worked for him.

Torshin was sanctioned by the U.S. Treasury Department in April.

Butina was arrested on Sunday and was ordered held pending a hearing set for Wednesday, it said.

According to the complaint against her, she worked with two unnamed U.S. citizens and the Russian official to try and influence American politics and infiltrate a pro-gun rights organization.

The complaint does not name the group; however, photos on her Facebook page show she has attended events sponsored by the National Rifle Association.

She arranged dinners in Washington and New York City and tried to develop relationships with American politicians in order to establish "back channel" lines of communication to "penetrate the U.S. national decision-making apparatus to advance the agenda of the Russian Federation," the complaint said.