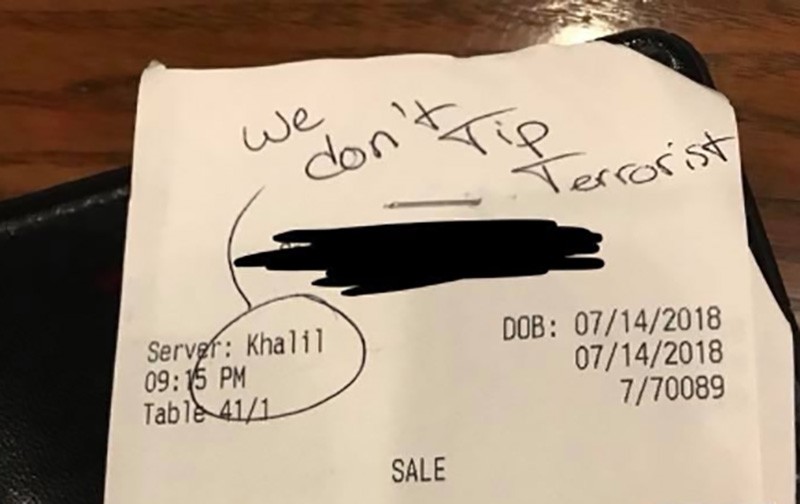 A waiter at a Texas steakhouse said he was "sick to his stomach" after a customer left a racist note and no tip on Saturday, in an incident that gained international attention after Khalil Cavil shared it on social media.

The 20-year-old server at Saltgrass Steak House in Odessa, Texas, posted an image of the receipt a customer left for him.

On the bill for $108.73, the customer had circled Cavil's name and written, "we don't tip terrorist."


"At the moment I didn't know what to think nor what to say, I was sick to my stomach," Cavil wrote Sunday on Facebook.

"I share this because I want people to understand that this racism, and this hatred still exists. Although, this is nothing new, it is still something that will test your faith," he said.

"I have decided to let this encourage me, and fuel me to change the world the only way I know how," he wrote, adding that he wouldn't let "haters" keep him from stepping into his "destiny."

By Thursday afternoon, Cavil's post had been liked more than 27,000 times and shared more than 21,000 times. Some social media users even offered to pay the withheld tip and sent Cavil monetary donations.

Cavil posted a follow-up message on Wednesday, thanking people for the words of encouragement and financial support.

"I want to make it very clear that this was never about the tip nor the money. It was about igniting conversations because I believe real change happens when we start talking about the issue and acknowledging its there," he wrote, adding that he donated the money to his church.

Chief operating officer of Saltgrass Steak House, Terry Turney, told local media that the customer who left the note has been banned from the restaurant.

"We stand by and support our employee. Racism of any form is unacceptable," Turney said.

Cavil told Texas ABC affiliate KMID that people often make assumptions about his name, but he has no Arab heritage. He said he was named after one of his father's best friends who died in a military accident. The name Khalil means friend in Arabic.

Cavil declined to identify the customer.