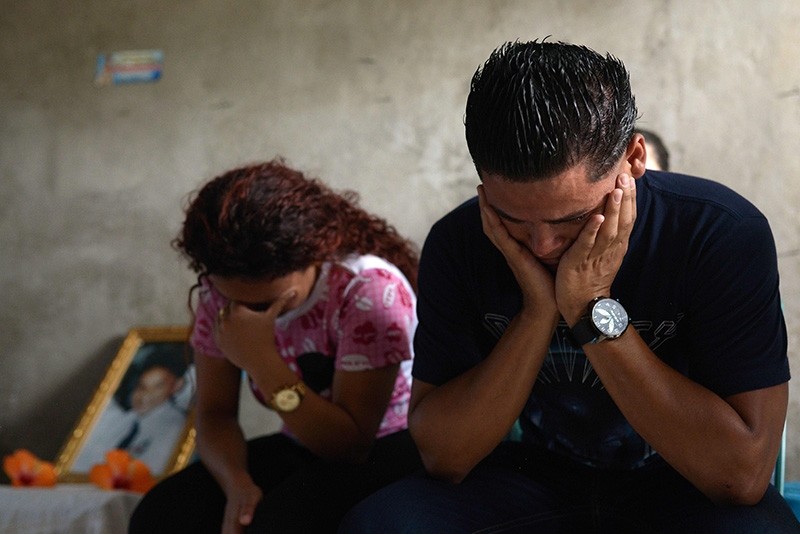 A couple mourns during the funeral of 21-year-old Bryan Picado, who died during clashes with members of Nicaragua's Special Forces in the Sandino neighborhood in Jinotega on July 24, 2018. (AFP Photo)
by Compiled from Wire Services Jul 26, 2018 12:00 am

A Nicaraguan rights group has raised to 448 the number of dead from more than three months of unrest and protests demanding President Daniel Ortega leave office.

The new count from the Nicaraguan Pro-Human Rights Association is an increase of nearly 100 over the previously released toll.

Most of the civilians were anti-government protesters.

Among the 448 victims, 425 were assassinated. Nearly 360 of them died from bullet wounds, including 115 who were shot in the head. Some were stabbed or burned to death. The victims included three foreigners, who were from Guatemala, Brazil and the United States.

Leiva said Thursday that 399 of the dead have been identified.

Paramilitary groups have also abducted 718 people, 595 of whom remain missing, according to Leiva.

"There is a deep crisis of human rights violations," the activist said, accusing paramilitary groups of intimidating the population out of "party and ideological fanaticism."

The unrest began in April as protests against proposed social security cuts, which were later scrapped. Following a violent crackdown by security forces and allied armed civilian groups, the demonstrations broadened in scope to include a demand for early elections.

Ortega has denied any responsibility for the killings and accuses those seeking his exit of being coup plotters.

On Monday Ortega gave an interview to U.S. television channel Fox News saying that he would not step down and would see through his current term to 2021.

He also asserted that "the turmoil has stopped" in his country after offensives over the past couple of weeks against protest hubs, and he denied his security forces and coordinating paramilitaries were attacking peaceful demonstrators.

Talks between Ortega's administration and the opposition, mediated by Catholic bishops in the country, have stalled for over a month, with the president refusing to bring forward polls.

Managua's archbishop, Cardinal Leopoldo Brenes, told AFP that the Church "is not an enemy" of Ortega's government, and urged the administration to "listen" to the people.

He said that, while conditions were not right now to resume dialogue, "without talks there could be more deaths."

For Nicaragua's 72-year-old president, a former left-wing guerrilla who has ruled over his poor nation for 22 of the past 39 years since his Sandinista rebels toppled a U.S.-backed dictator, the unrest has been the worst he has faced since returning to power in 2007.

The protests were prompted by cutbacks to the social security system, but quickly spread as they tapped into broad disgruntlement with Ortega and his wife, whom he has made his vice president. Critics liken their government to a corrupt leftist dictatorship.