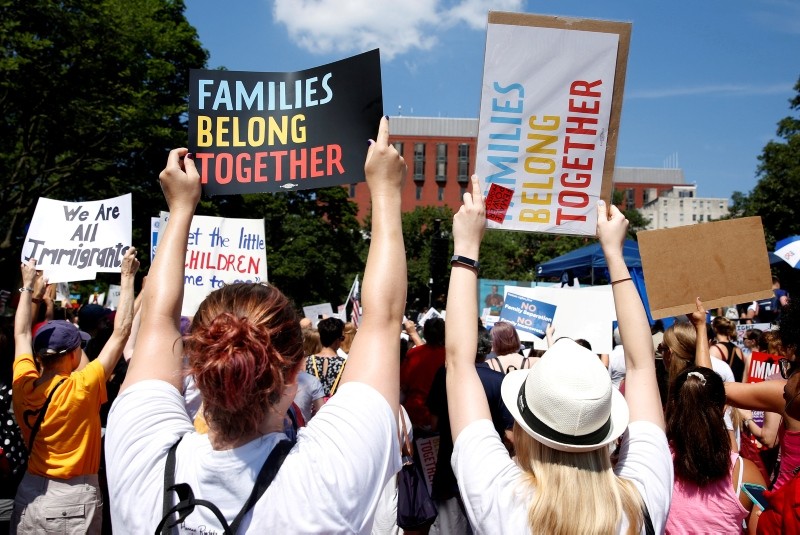 Immigration activists hold signs against family separation during a rally to protest against the Trump Administration's immigration policy outside the White House in Washington, U.S., June 30, 2018. (Reuters Photo)
by Compiled from Wire Services Aug 10, 2018 12:00 am

A federal judge on Thursday halted a deportation in progress and threatened to hold Attorney General Jeff Sessions in contempt if the mother and daughter weren't returned to the U.S.

U.S. District Judge Emmet G. Sullivan of Washington learned in court that the two plaintiffs in a lawsuit before him were being removed from the United States and confirmed later that they were on a plane headed to Central America. He said any delay in bringing them back would be intolerable.

The Department of Homeland Security was bringing the pair back to the United States on Thursday after the plane landed in El Salvador. The mother and daughter did not disembark in the Central American country.

"This is pretty outrageous," Sullivan said in court, according to The Washington Post. "That someone seeking justice in U.S. court is spirited away while her attorneys are arguing for justice for her?"

"I'm not happy about this at all," the judge said, according to the Post. "This is not acceptable."

The woman — identified in court as Carmen — is a plaintiff in a lawsuit filed this week against the administration by the American Civil Liberties Union over efforts to prevent immigrants from seeking asylum because of domestic and gang violence in their home countries. The lawsuit asks the judge to invalidate Sessions' June 11 decision to restrict the kinds of cases that qualify for asylum.

The judge imposed a halt Thursday on deporting Carmen, her daughter and six other plaintiffs. The Justice Department declined to comment on the judge's threat of contempt.