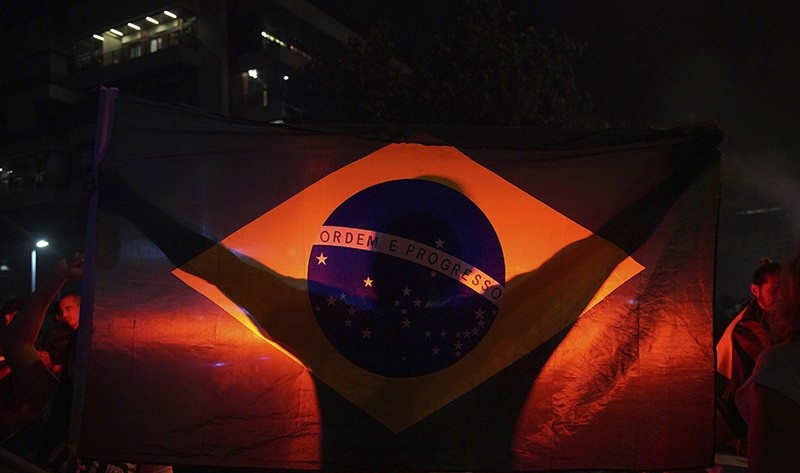 A man waves a Brazilian flag during celebrations by of Jair Bolsonaro of the Social Liberal Party, in Rio de Janeiro, Brazil, Sunday, Oct. 7, 2018. (AP Photo)
by Compiled from Wire Services
Oct 08, 2018 12:00 am

Polarizing far-right politician Jair Bolsonaro won the first round of its presidential election by a surprisingly large margin Sunday but fell just short of getting enough votes to avoid a second-round runoff against leftist rival Fernando Haddad.

Bolsonaro, an ultraconservative former paratrooper, easily beat a dozen other candidates on Sunday -- but not by enough to avoid an Oct. 28 showdown with Haddad, the former mayor of Sao Paulo.

Bolsonaro won 46 percent of the vote to Haddad's 29 percent, according to official results.

That tracked closely with pollster's predictions, but Bolsonaro charged that "polling problems" had cheated him of outright victory in the first round, which required him to pass the 50 percent threshold.

Some of his supporters protested outside the national electoral tribunal in the capital Brasilia, chanting "Fraud!"

That anger reflected the uncertain outlook for the second round.

Surveys suggest Bolsonaro will have the edge, but that Haddad will draw nearly even with him after picking up substantial support from the defeated candidates.

"We expected to win in the first round," one Bolsonaro voter, 77-year-old retiree Lourdes Azevedo, said bitterly in Rio de Janeiro.

"Now things are more difficult: the second round is a risk."

Haddad, addressing his own supporters, called the looming run-off "a golden opportunity," and challenged Bolsonaro to a debate.

He replaced popular former president Luiz Inacio Lula da Silva in the race after Lula, imprisoned for corruption, was disqualified.

Despite his complaints, Bolsonaro did not formally contest Sunday's result, saying his voters "remain mobilized" for the second round.

Bolsonaro said on Monday that he was already in talks with other lawmakers in Congress to gain support if he wins the run-off later this month, as his party would not be able to govern alone.

He also said he would stick with his Wall Street-friendly economic advisor Paulo Guedes, adding that he would hew to his hard-line message and not become a "peace and love" candidate.

But despite Sunday's victory, Bolsonaro faces fierce resistance going forward from a big part of Brazil's 147-million-strong electorate put off by his record of denigrating comments against women, gays and the poor. His unabashed nostalgia for the brutal military dictatorship that ruled Brazil between 1964 and 1985 has also sent a chill through many voters.

Haddad, though, has his own burden. As the Workers' Party candidate, he faces the palpable disappointment and anger of voters who blame the party for Brazil's worst-ever recession, and for a long string of graft scandals.

Sunday's general election -- in which new federal and state legislatures were also chosen -- exposed the deep divisions generated by both candidates.

Some voters -- particularly women -- carried "Not Him" placards to polling stations in opposition to Bolsonaro.

But his supporters, like 53-year-old lawyer Roseli Milhomem in Brasilia, said they backed the veteran lawmaker because "Brazil wants change."

"We've had enough of corruption. Our country is wealthy -- it can't fall into the wrong hands," she said.

"It looks difficult for Haddad to win in the second round, but not impossible."

Better-off Brazilians have rallied to Bolsonaro's pledge to crush crime in a country where there are more than 62,000 murders each year, nearly as many rapes, and frequent muggings and robberies.

Many voters also like his promises to tackle corruption and to cut climbing public debt through privatizations, as well as the devout Catholic's family-first stance.

But poorer Brazilians, who benefited the most from the heyday during Lula's time in office from 2003 to 2010, want a return to good times and hope Haddad can deliver.

The result is a very split electorate. Whoever ultimately wins the presidency in the world's eighth largest economy will grapple with a large bloc of ideological hostility.

Brazil is the largest economy in Latin America and it is a diplomatic heavyweight in the region. Bolsonaro has promised to shake up its foreign policy, including taking a harder line on Venezuela and other leftist regimes and forging closer ties with the U.S. He has been short on details, but he has also promised a more open economy.

Despite sitting in congress for nearly three decades, Bolsonaro casts himself as a political outsider in the mold of America's Donald Trump: Tough-talking, brash and promising a root-and-branch overhaul to an electorate weary of traditional parties spouting empty promises.

Long before Sunday's election, many observers flirted with the idea that the far-right congressman was a "tropical" Trump. Perhaps the biggest similarity and likely the one that initially gave rise to the comparisons between Bolsonaro and Trump is that neither man appears to measure his words.

In the 2016 U.S. elections, Trump often billed himself as the man who wasn't afraid to say what everyone else was thinking. Bolsonaro shares the same lack of filter. Some of the comments that have gotten him in trouble reflect longstanding ideological positions, like his repeated praise for Brazil's 1964-1985 military dictatorship.

Bolsonaro, like Trump, has made heavy use of Twitter and Facebook to talk directly to voters. That became especially important after the candidate was stabbed on Sept. 6 and confined to the hospital for more than three weeks. Last week, even after being released from the hospital, Bolsonaro skipped the most important televised debate on major network Globo, citing his doctors' orders. Instead, he held nightly Facebook live sessions with political allies and did interviews with friendly stations.