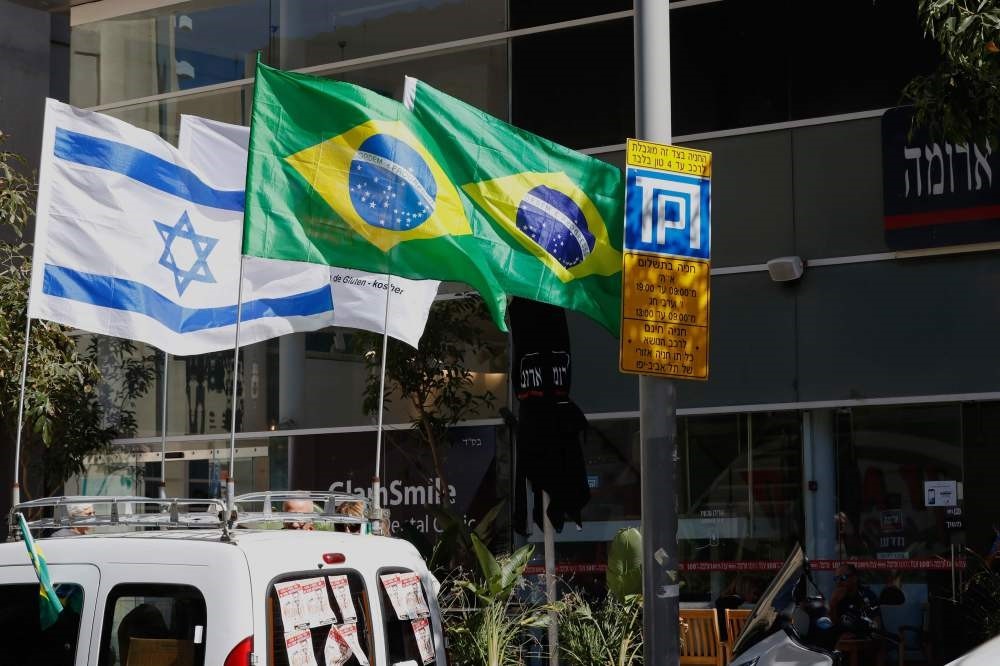 Israeli and Brazilian flags hang outside the building housing the offices of the Brazilian Embassy, Tel Aviv, Oct. 28.
by Compiled from Wire Services Nov 02, 2018 12:00 am

Poised to follow the U.S. president in his most radical foreign policy position, Brazil's far-right President-elect Jair Bolsonaro vowed to become the second country to follow the Jerusalem embassy move

Brazil's President-elect Jair Bolsonaro, dubbed the "Tropical Trump," has told an Israeli newspaper he intends to defy the Palestinians and most of the world by moving his country's embassy from Tel Aviv to Jerusalem. Brazil would become the second major country after the United States to do so.

Asked in an interview with Israel Hayom published yesterday if he would move Brazil's embassy, as he had indicated during his campaign, Bolsonaro said Israel should decide where its capital is located.

"When I was asked during the campaign if I'd do it when I became president, I said 'yes, the one who decides on the capital of Israel is you, not other nations'," he told the paper, which is a firm backer of Israeli Prime Minister Benjamin Netanyahu.

Brazil's election of the hard-right Jair Bolsonaro has given Donald Trump a kindred spirit, with the Americas' two most populous nations to be ruled by brash presidents in tune on issues from climate change to Israel. Bolsonaro has often expressed admiration for Donald Trump and appears poised to follow the U.S. president in a radical overhaul of his nation's foreign policy.

During his campaign, the right-winger imitated U.S. President Donald Trump's strategy and promised to join the handful of countries that have moved their embassies in Israel from Tel Aviv to Jerusalem.

In December, President Donald Trump reversed longstanding U.S. policy and recognized Jerusalem as the capital of Israel, prompting Palestinian president Mahmud Abbas to boycott his administration. The embassy was officially transferred on May 14, with Guatemala and Paraguay following suit, though the latter announced last month it would return its embassy to Tel Aviv.Following his victory, Bolsonaro spoke with Israeli Prime Minister Benjamin Netanyahu, who warmly invited him to Israel, the PM's office said on Sunday. Netanyahu told Bolsonaro he was certain his election "will lead to a great friendship between our peoples and the tightening of links between Brazil and Israel." An official in Netanyahu's office told Agence France-Presse (AFP) the Israeli premier was "very likely" to attend Bolsonaro's inauguration ceremony in January.

Rubens Barbosa, a former Brazilian ambassador to Washington, believes that ultimately Bolsonaro will backtrack on his most radical foreign policy positions. "In the case of recognizing Jerusalem as the Israeli capital, for example, it would be throwing away $6 billion per year in poultry sales to Arab countries," Barbosa said according to The Associated Press, noting that Brazil is one of the world's largest poultry and beef exporters.

"There will be people to advise him on the impacts and he will listen," he said.

Bolsonaro also vowed to pull Latin America's largest nation out of the Paris climate accord and take a hard-line against President Nicolas Maduro in neighboring Venezuela.

A deeply polarizing figure at home, Bolsonaro has also ruffled feathers abroad. He called refugees fleeing to Europe "human waste," raising eyebrows in African and Middle Eastern countries, and irritated China by visiting Taiwan, which Beijing considers to be a breakaway province.

And, like Trump, he has also said Brazil would scrap or try to renegotiate trade treaties, including the South American common market Mercosur.