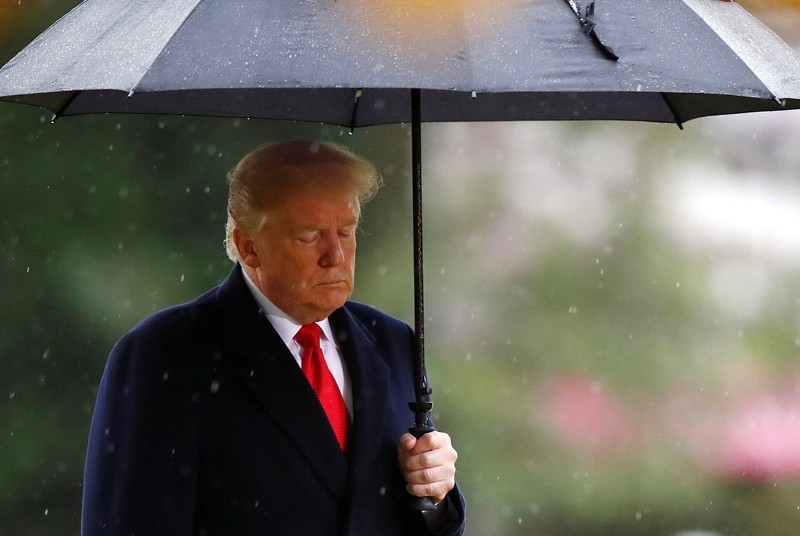 Trump visits the Suresnes American Cemetery as part of the Paris commemoration ceremony for the Centenary of the WWI Armistice of 11 November 1918, in Suresnes, France, 11 November 2018. (EPA Photo)
by Associated Press Nov 12, 2018 12:00 am
Stung by criticism for not attending an event honoring U.S. military dead, the White House says President Donald Trump didn't want to disrupt Paris roadways for a last-minute motorcade to a cemetery in northern France.

Trump had been scheduled to lay a wreath and observe a moment of silence Saturday at the Aisne-Marne American Cemetery and Memorial, located adjacent to Belleau Wood and about 60 miles (100 kilometers) northeast of Paris. The White House cited weather conditions that grounded the president's helicopter for the cancellation.

In the wake of criticism that Trump didn't travel by car to the event, press secretary Sarah Huckabee Sanders issued a statement Sunday that noted the weather and "near-zero visibility" as well as concerns that a motorcade on short notice would have required closing substantial portions of area roadways.

"President Trump did not want to cause that kind of unexpected disruption to the city and its people," Sanders said. She also said the trip to Aisne-Marne was 2½ hours each way by car.

Instead, Trump spent much of Saturday at the U.S. ambassador's residence following a meeting and lunch with French President Emmanuel Macron. Trump was in Paris for events to commemorate the 100th anniversary of the end of World War I.

Attending the cemetery event in Trump's place were the White House chief of staff, retired Marine Gen. John Kelly; the chairman of the Joint Chiefs of Staff, Marine Gen. Joe Dunford; and several members of the White House staff. The Battle of Belleau Wood was a critical conflict in the war and a pivotal encounter in Marine Corps history.

The determination to ground Marine One, the president's helicopter, due to bad weather is made by the Marine Corps and the White House Military Office, which then presents the recommendation to the White House in collaboration with the Secret Service, according to a Secret Service official.

Paris was covered in clouds with drizzling rain through most of Saturday.

On Sunday, Trump attended a scheduled event honoring American war dead at a U.S. cemetery just outside of Paris.