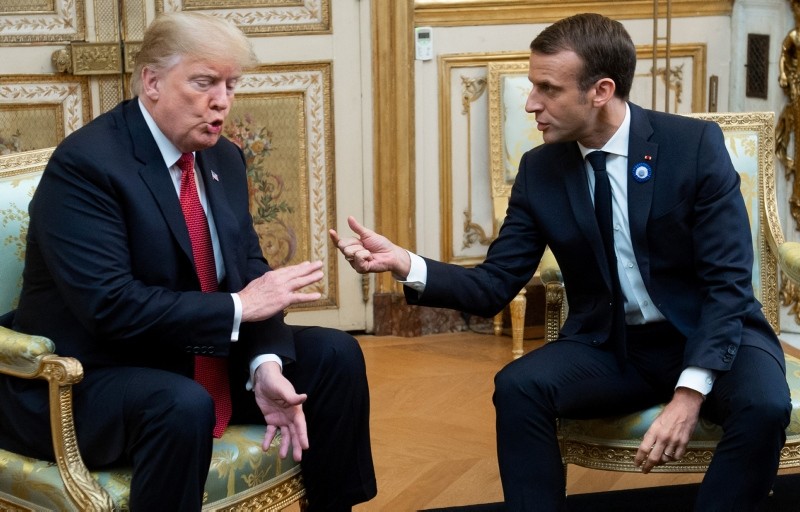 In this file photo taken on Nov. 10, 2018 US President Donald Trump (L) speaks with French president Emmanuel Macron prior to their meeting at the Elysee Palace in Paris. (AFP Photo)
by Daily Sabah with Agencies Nov 13, 2018 12:00 am

Following their bittersweet showdown in Paris, U.S. President Donald Trump lashed out on his French counterpart Emmanuel Macron, criticizing him on his joint European military proposal, signaling tariff hikes on French products while hitting him below the belt by mentioning his approval rating.

As his usual treat, Trump salvoed couple of tweets, but probably the most controversial and insulting one was to remind the Frenchmen that the U.S. forces assumed the bulk of the task of liberating France from Nazi Germany. Trump said: "Emmanuel Macron suggests building its own army to protect Europe against the U.S., China and Russia. But it was Germany in World Wars One & Two - How did that work out for France? They were starting to learn German in Paris before the U.S. came along. Pay for NATO or not!"

The U.S. president waited for another hour to say that the French are making excellent wines, but the U.S. charges them with small tariffs when compared to U.S. wine imports to France.

Then he take the whole thing to a personal level. "The problem is that Emmanuel suffers from a very low Approval Rating in France, 26%, and an unemployment rate of almost 10%. He was just trying to get onto another subject. By the way, there is no country more Nationalist than France, very proud people-and rightfully so!........ ......MAKE FRANCE GREAT AGAIN!"

The tweets came after Macron denounced nationalism as "betrayal of patriotism" in a powerful speech in Paris before world leaders, including Trump who often calls himself a nationalist, in a ceremony to mark the 100th anniversary of the end of World War I.

Macron said, adding that, when nations put their interests first and decide "who cares about the others" they "erase the most precious thing a nation can have ... its moral values."

The French president's office said Tuesday that it would not comment on the flurry of angry tweets from Trump.

Over the weekend, Macron angered Trump by saying Europe needed its own army and listing the U.S. along with Russia and China as a threat to European security. Trump fired off a tweet as he arrived in Paris last week in which he described a call by French President Emmanuel Macron for a European army as "very insulting."

Unlike Trump, Russian President Vladimir Putin defended the idea of a European army by stating that it made sense for a powerful economic bloc like the European Union to want to defend itself militarily.

Macron, who has pushed for a joint EU military force since his arrival in power last year, said Europe needed to reduce its dependence on American might, not least after Trump announced he was pulling out of a Cold War-era nuclear treaty.

Addressing European MEPs on her vision for the future of Europe, German Chancellor Angela Merkel also called for a European Security Council that would centralize defense and security policy on the continent.

The EU launched a joint multibillion-euro defense fund last December designed to develop Europe's military capacities and make the continent more strategically independent. France has also spearheaded the creation of a nine-country force designed to be capable of rapidly mounting a joint military operation, an evacuation from a war zone or providing aid in a natural disaster.

Trump's "America first" policy and his conflicting statements on NATO and the EU, as well as what he sees as Europe's underfunded militaries, have prompted the bloc to consider much closer EU defense coordination.

Trump has repeatedly berated European NATO members like Germany for failing to meet spending targets set by the alliance. But in an interview aired on Sunday, Macron said Europe should not raise their defense budgets in order to purchase U.S.-made weapons. French President had last month criticized Belgium's decision to buy U.S.-made F-35 fighter jets instead of European planes, saying it "goes against European interests."

Britain's imminent departure from the EU has also given impetus to the bloc's plans, both because London blocked EU defense cooperation for years and also as the bloc compensates for the loss of the EU's highest-spending military power.

However, the bloc still insists that the U.S.-led NATO alliance remains responsible for defending Europe, while France is seeking to keep Britain close to EU military structures through a French-led crisis response force launched by nine European countries.