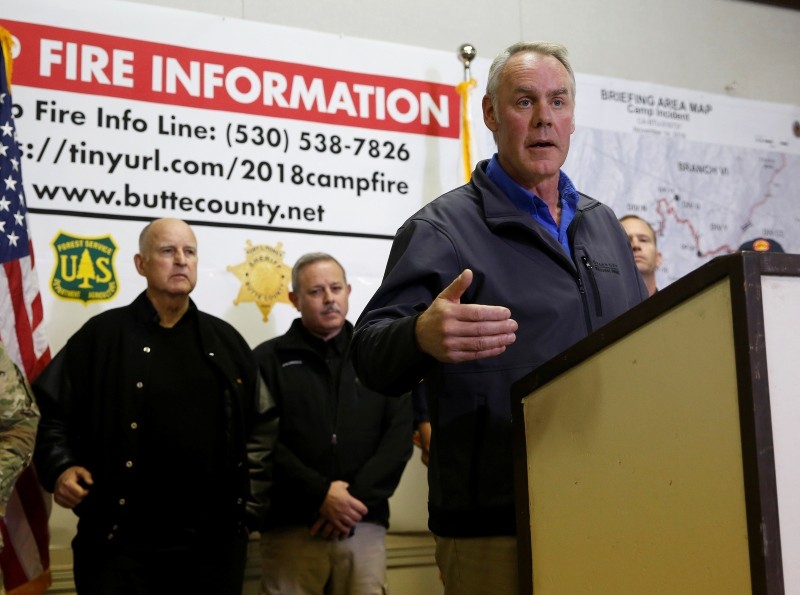 U.S. Secretary of the Interior Ryan Zinke, right, responds to a reporters question during a news conference held with California Gov. Jerry Brown, left, after touring the fire ravaged town of Paradise, Calif, Wednesday, Nov. 14, 2018. (AP Photo)
by Nov 20, 2018 12:00 am
U.S. Interior Department Secretary Ryan Zinke said on Tuesday that the deadly California wildfires were partly due to lawsuits from environmentalists who have sought to stop forest management practices, such as forest thinning.

"Radical environmental groups that would rather burn down the entire forest than cut a single tree or thin the forest," have brought lawsuits to stop forest management, Zinke told reporters in a teleconference about the California wildfires, the deadliest in the state's history. "Yes, I do lay it on the feet," of environmentalists, he said.

Zinke did not name the groups, saying he did not want to finger point. He said other variables, such as hotter temperatures, historic drought conditions, and plenty of dead and dying trees also were also to blame.

Zinke first said environmentalists were partially to blame on Breitbart News on Sunday after visiting the California wildfire zone.

Zinke said Germany was a model of forest management. President Donald Trump said while visiting California that Finland's President Sauli Niinisto recently told him the country rarely has wildfires because "they spend a lot of time raking and cleaning and doing things" to clear the forest floor. Niinisto has said raking did not come up in his conversation with Trump.

U.S. Agriculture Secretary Sonny Perdue said forest management practices need to be sped up and he hoped that U.S. agencies could get more authority under legislation.

But he said years of neglect mean it could take years for authorities to catch up to forest management, such as thinning out the fuel of dead trees and dry underbrush, and improving emergency roads.