Get away from Buenos Aires: Argentina braces for violence ahead of G-20 summit 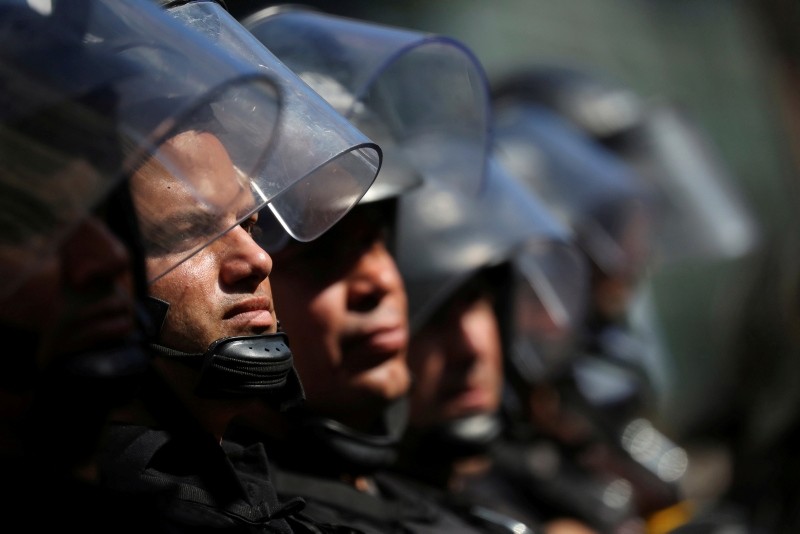 Riot police stand guard as members of social groups gather to protest against the Group of 20 summit in Buenos Aires, Argentina, Nov. 28, 2018. (Reuters Photo)
by Compiled from Wire Services Nov 29, 2018 12:00 am

Argentina will launch a massive security operation in coming days to try to ensure a calm meeting of the leaders of the Group of 20 bloc of nations in Buenos Aires, calling a national bank holiday on Friday and shutting down the city's main business district.

With local merchants riled about losing business on Friday and Saturday, and anti-globalization protesters preparing to march, the government has advised anyone not involved in the G-20 to take Friday off and get out of town for a long weekend.

This year's G-20 summit, where leaders of the world's 20 top industrialized countries will discuss issues such as trade and climate change, will be held in the Argentine capital from Nov. 30 to Dec. 1. The lockdown of parts of the city will start on Thursday night and last until Sunday.

Protests have been a fixture of past G-20 events, and hooded anti-capitalist militants clashed with police in last year's summit in Hamburg, Germany, torching cars, smashing shops and injuring officers.

Banks, markets and government offices will be closed in Buenos Aires on Friday.

"Our recommendation is to use the long weekend to get away," Security Minister Patricia Bullrich said in a recent television interview.

"Take off after work on Thursday because the city is going to get very challenging. Our security measures will be very strong and the decisions that we will make if there is violence will be immediate," she said.

Security concerns increased after a melee outside a Buenos Aires soccer stadium last weekend that derailed the final leg of the region's main club tournament.

But Bullrich said Buenos Aires is ready for the G-20, with 22,000 police and and 3,000 soldiers to ensure peace. They will be equipped with 15 million rubber bullets and 2 million rounds of live ammunition, according to media reports.

AWACS aircraft and about 400 U.S. military personnel have meanwhile been stationed in neighboring Uruguay to provide security for the summit.

"We are on maximum alert," summit coordinator Hernan Lombardi said.

Coffee shop Cafe Metro, a stone's throw from the capital city's Teatro Colon, where G-20 leaders will meet for a Friday night gala, will have to close on Friday and Saturday, along with hundreds of other local area businesses.

"We will lose two days of business at the end of the month, and toward the end of the year, when we most need money to pay our bills, the rent and salaries," the cafe's manager Fernando Garzon told Reuters.

Others nearby echoed his concerns.

"It's something that further punishes small businesses at the end of a very punishing year," restaurateur Leonardo Suckewer said.

Argentines are struggling with economic recession and inflation at around 45 percent, with the government introducing tough austerity measures as it seeks to lower the fiscal deficit.

Thousands of Argentine left-leaning protesters are expected to march on Friday afternoon. They will be restricted to a 2.5-kilometer (1.55 mile) area that will not include two landmarks they had originally planned to reach: the central Obelisk and Plaza de Mayo, two historic focal point for protests in Argentina, activists said.

Dozens of groups have announced demonstrations against Macri's alliance with the IMF and the G-20 itself, with the biggest demonstration planned for Friday evening.

"They've made a great effort to make sure there's no one in the streets. We will march anyway," said Beverly Keene, march coordinator and head of Jubileo Sur-Dialogo 2000, a group that campaigns for debt reform in Latin America and the Caribbean.

A spokesman for the Security Ministry did not immediately respond to a request for comment.