US uses tear gas across Mexico border to repel migrants 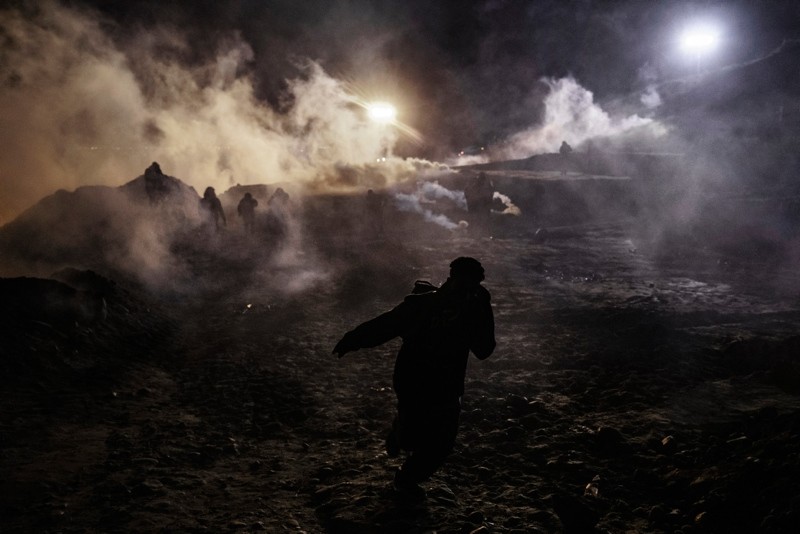 Migrants run as tear gas is thrown by U.S. Border Protection officers to the Mexican side of the border fence after they climbed the fence to get to San Diego, Calif., from Tijuana, Mexico, Tuesday, Jan. 1, 2019. (AP Photo)
by Compiled from Wire Services Jan 01, 2019 12:00 am

U.S. authorities fired tear gas into Mexico during the first hours of the new year to repel about 150 migrants who were trying to breach the border fence in Tijuana.

An Associated Press photographer witnessed at least three volleys of gas launched onto the Mexican side of the border near Tijuana's beach early Tuesday. It affected the migrants, including women and children, as well as members of the press.

Migrants who spoke with AP said they arrived last month with the caravan from Honduras.

U.S. Customs and Border Protection says in a statement that the gas was aimed at rock throwers on the Mexican side who prevented agents from helping children who were being passed over the concertina wire. The agency says 25 migrants were detained.

Meanwhile, President Donald Trump on Tuesday invited congressional leaders to a bipartisan briefing on border security at the White House as a partial U.S. government shutdown over Trump's $5 billion demand for a wall along the border with Mexico is in its second week.

The president's invitation, which was described by congressional sources as a briefing and not a negotiating session, was sent to the top two party leaders in both the Senate and the House of Representatives. It was unclear whether leaders would attend the briefing, which is set for Wednesday, one source said. The White House did not immediately respond to a request to comment on the briefing's specifics.

The House and Senate will reconvene briefly on Wednesday to mark the last day of the Republican-controlled 2017-2018 Congress, with no signs of a workable plan to end the shutdown of about a quarter of the federal government, affecting roughly 800,000 workers.

On Thursday, when Democrats take control of the House, they plan to approve a two-part spending package meant to end the shutdown. But its prospects are grim in the Republican-led Senate, which previously approved similar measures on the floor or in committee but has since fallen in line with Trump's wall funding demands.

The legislation sets the stage for the first major battle of the new Congress between House Democrats led by Nancy Pelosi and Republican Senate Majority Leader Mitch McConnell.

"Border Security and the Wall 'thing' and Shutdown is not where Nancy Pelosi wanted to start her tenure as Speaker! Let's make a deal?" Trump tweeted on Tuesday.

Trump triggered the shutdown, which began on Dec. 22, by insisting that $5 billion for funding a border wall be part of any spending measure.

Trump calls the wall crucial to curbing illegal immigration, echoing his 2016 presidential campaign pledge. During his run for the White House, Trump insisted Mexico would pay for the wall.

The Democrats' two-part package includes a bill to fund the Department of Homeland Security at current levels through Feb. 8 and provide $1.3 billion for border fencing and $300 million for other border security items including technology and cameras.

The second part of the package would fund federal agencies that are now unfunded, such as the Justice, Commerce and Transportation departments, through Sept 30, the end of the federal fiscal year.

The House Democrats' measure does not contain the $5 billion Trump wants. McConnell has said Senate Republicans will not approve a spending measure not supported by Trump.