Trump administration downgrades status of EU diplomats in US 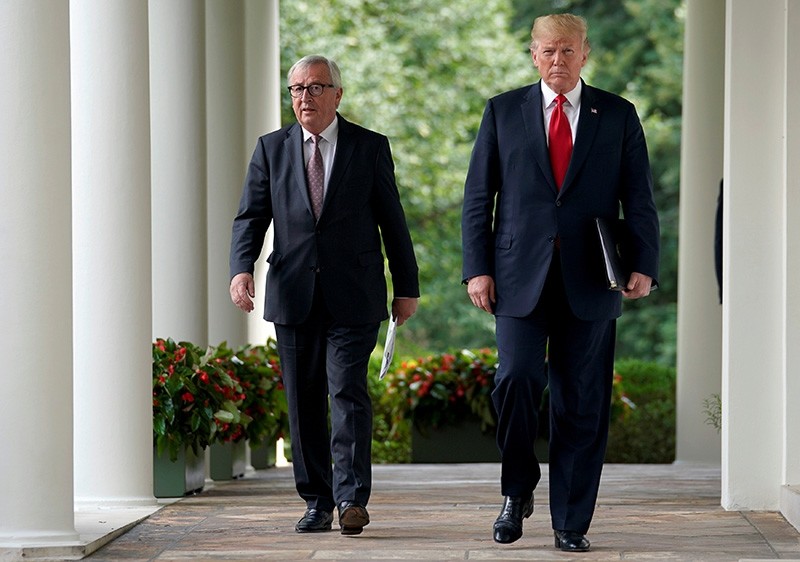 U.S. President Donald Trump and President of the European Commission Jean-Claude Juncker walk together before speaking about trade relations in the Rose Garden of the White House in Washington, U.S., July 25, 2018. (Reuters Photo)
by Jan 25, 2019 11:52 am

The change in protocol for a close U.S. ally means the bloc's Washington-based diplomats are less likely to be invited to high-profile events and have a lower importance than under former President Barack Obama.

The snub, first reported by German broadcaster Deutsche Welle, was illustrated at the Dec. 5 funeral of another former U.S. president, George H.W. Bush, when Europe's envoy was among the last diplomats to be called to pay respects, one EU official said.

"We understand that there was a recent change in the way the diplomatic precedence list is implemented by the United States' protocol," a Commission spokeswoman told a briefing, declining to give more details.

"We are currently discussing with the relevant services in the administration possible implications for the EU delegation in Washington."

Two other EU diplomats confirmed the downgrade, with one saying it was unlikely the bloc would retaliate given its desire for good relations.

U.S. diplomats in Brussels were not immediately available for comment.

Trump has often shown his disdain for the EU and has backed Britain's planned departure from the bloc.

But the United States and EU have the world's biggest bilateral trade ties, and U.S. investment in the bloc is three times higher than in Asia, according to EU data.

While the shift does not stop senior EU officials from meeting U.S. counterparts, it follows a tumultuous year for transatlantic ties. Trump withdrew from several international agreements backed by the EU and vowed to reform "the liberal international order" he says the bloc helps underpin.

In a speech in Brussels in December, U.S. Secretary of State Mike Pompeo said Trump's "America First" policy was reshaping the post-World War Two system on the basis of sovereign states, not multilateral institutions.

He also took aim at "bureaucrats" responsible for upholding multilateralism "as an end in itself" and cast doubt on the EU's commitment to its citizens, drawing a rare rebuke from the European Commission, the bloc's executive.