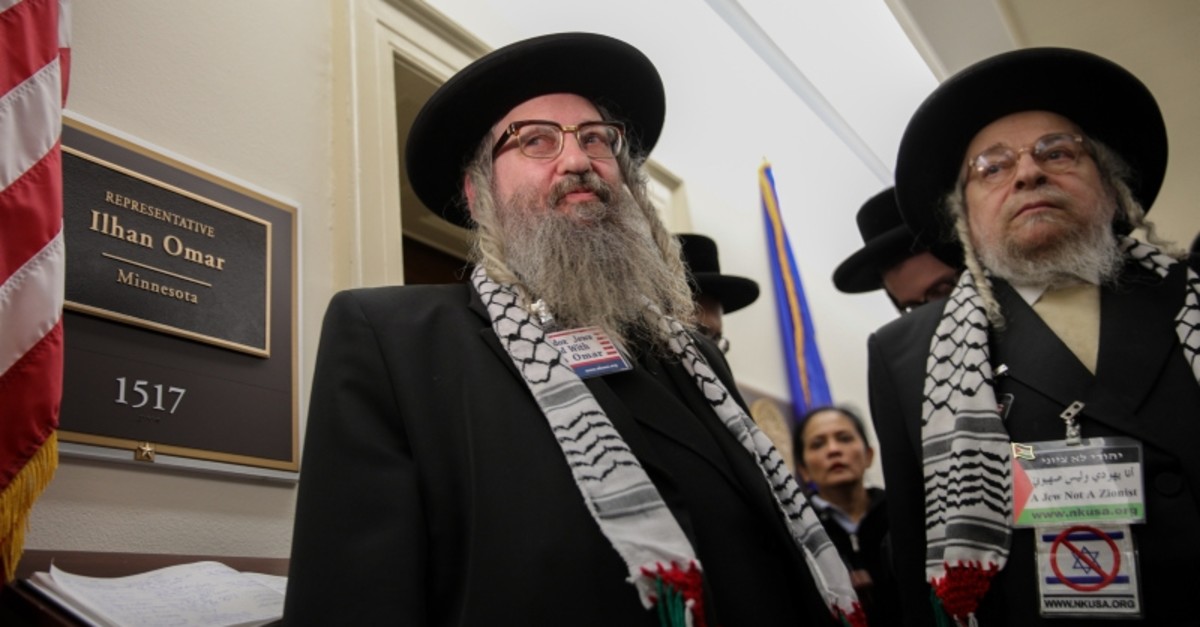 Anti-Zionist Jews while visiting Omar's room to declare support for her (AA Photo)
by Daily Sabah with Wires Mar 08, 2019 12:00 am

US lawmakers on Thursday overwhelmingly approved a resolution condemning anti-Semitism, Islamophobia and other forms of hatred and bigotry, following an acrimonious debate over a Muslim congresswoman's comments about Israel policy.

The measure, which passed 407 to 23, did not reprimand Minnesota freshman Ilhan Omar by name after her remarks that several lawmakers deemed "anti-Semitic," but it condemned "hateful expressions of intolerance that are contradictory to (US) values and aspirations."

Some lawmakers wanted Omar implicitly rebuked with a measure condemning anti-Semitism. But others said the resolution should condemn discrimination against Muslims, too.

Drawing fire from fellow party members, President Donald Trump and many other lawmakers, Omar was accused of "being anti-Semitic" even though she did not utter a single word invoking racism against Jewish people. Nevertheless, in the U.S., where the Israeli lobby is so strong that one can be accused of anti-Semitism for a single word Israeli government deems offensive, it was not long until Omar faced heavy insults and slander.

In a pair of tweets over the weekend, Omar criticized the American Israel Public Affairs Committee, or AIPAC. "It's all about the Benjamins baby," she wrote, using slang about $100 bills.

As if no people other than the Jews use money for daily affairs, which ironically is anti-Semitic in itself, one lawmaker claimed that Omar used the anti-Semitic trope of "Jewish money."

Later asked on Twitter who she thought was paying members of Congress to support Israel, Omar responded, "AIPAC!"

This response also very much reflects the truth, and carries no sentiment close to anti-Semitism as it is widely known that in addition to Jewish members of the lobby, many other members of AIPAC are non-Jewish people in favor with good relations with Israel.

Democrats have long been split over the U.S.-Israeli relationship. But the developments seem to highlight a divide that's as generational as it is ideological. The dynamics on Israel have seeped into the party's fight over the 2020 presidential nomination.