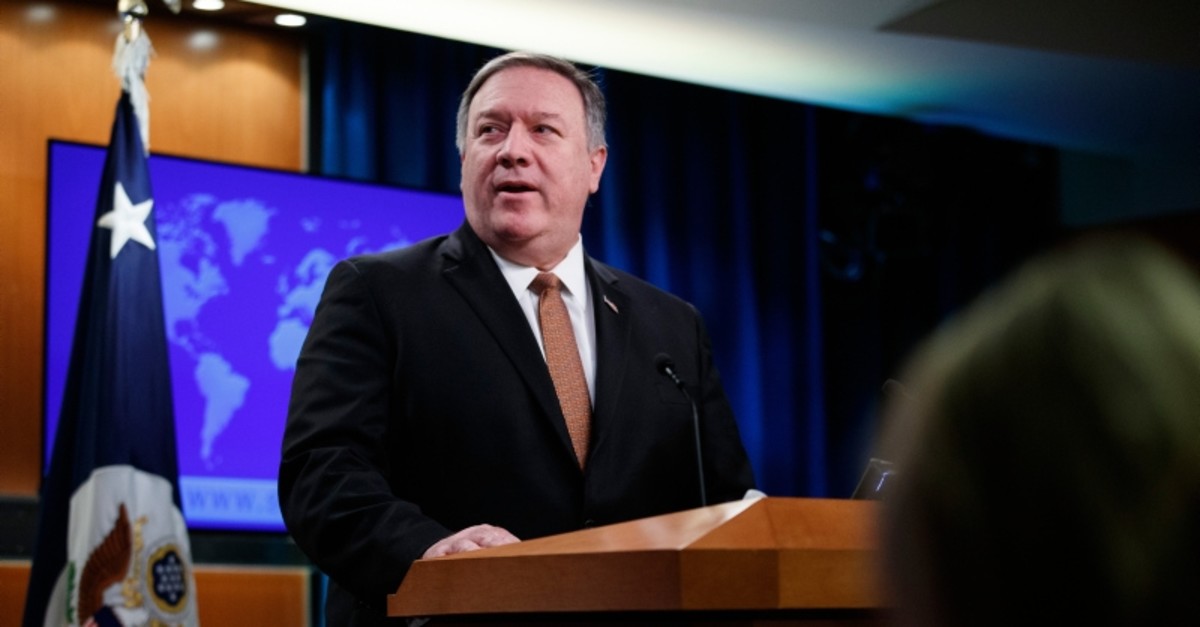 Secretary of State Mike Pompeo speaks during a news conference at the State Department, Friday, March 15, 2019 in Washington. (AFP Photo)
by Associated Press Mar 15, 2019 12:00 am

The United States will revoke or deny visas to International Criminal Court personnel seeking to investigate alleged war crimes and other abuses committed by U.S. forces in Afghanistan or elsewhere, and may do the same with those who seek action against Israel, Secretary of State Mike Pompeo said Friday.

Pompeo, acting on a threat delivered in September by U.S. national security adviser John Bolton, framed the action as necessary to prevent the international body from infringing on U.S. sovereignty by prosecuting American forces or allies for torture or other war crimes.

"We are determined to protect the American and allied military and civilian personnel from living in fear of unjust prosecution for actions taken to defend our great nation," Pompeo said.

U.S. officials have long regarded the Netherlands-based ICC with hostility, arguing that American courts are capable of handling any allegations against U.S. forces and questioning the motives of an international court.

The ICC and its supporters, including human rights groups that denounced Pompeo's announcement, argue that it is needed to prosecute cases when a country fails to do so or does an insufficient job of it.

The visa restrictions would apply to any ICC employee who takes or has taken action "to request or further such an investigation" into allegations against U.S. forces and their allies in Afghanistan that include forced disappearances and torture.

Pompeo said the restrictions "may also be used to deter ICC efforts to pursue allied personnel, including Israelis, without the allies' consent," he said.

The Hague-based court, the first global tribunal for war crimes, said it would continue to operate "undeterred" by the U.S. action.

The ICC prosecutor has a pending request to look into possible war crimes in Afghanistan that may involve Americans. The Palestinians have also asked the court to bring cases against Israel.

Speaking directly to ICC employees, Pompeo said: "If you are responsible for the proposed ICC investigation of U.S. personnel in connection with the situation in Afghanistan, you should not assume that you still have or will get a visa or will be permitted to enter the United States."

That comment suggested that action may have already been taken against the ICC prosecutor who asked last year to formally open an investigation into allegations of war crimes committed by Afghan national security forces, Taliban and Haqqani network militants, as well as U.S. forces and intelligence officials in Afghanistan since May 2003.

The prosecution's request says there is information that members of the U.S. military and intelligence agencies "committed acts of torture, cruel treatment, outrages upon personal dignity, rape and sexual violence against conflict-related detainees in Afghanistan and other locations, principally in the 2003-2004 period."

The United States has never been a member of the ICC. The Clinton administration in 2000 signed the Rome Statute that created the ICC but had reservations about the scope of the court's jurisdiction and never submitted it for ratification to the Senate, where there was broad bipartisan opposition to what lawmakers saw as a threat to U.S. sovereignty.

When President George W. Bush took office in 2001, his administration promoted and passed the American Service Members Protection Act, which sought to immunize U.S. troops from potential prosecution by the ICC. In 2002, Bolton, then a State Department official, traveled to New York to ceremonially "unsign" the Rome Statute at the United Nations.

This past September, Bolton said the ICC was a direct threat to U.S. national security interests and he threatened its personnel with both visa revocations and financial sanctions should it try to move against Americans. Pompeo said Friday that more measures may come.

The ICC said in a statement it was established by a treaty supported by 123 countries and that it prosecutes cases only when those countries failed to do so or did not do so "genuinely." Afghanistan is a signatory.

"The court is an independent and impartial judicial institution crucial for ensuring accountability for the gravest crimes under international law," the statement said. "The ICC, as a court of law, will continue to do its independent work, undeterred, in accordance with its mandate and the overarching principle of the rule of law."

Human Rights Watch called it "a thuggish attempt to penalize investigators" at the ICC.

"The Trump administration is trying an end run around accountability," it said. "Taking action against those who work for the ICC sends a clear message to torturers and murderers alike: Their crimes may continue unchecked."

Amnesty International described the move as "the latest attack on international justice and international institutions by an administration hellbent on rolling back human rights protections."

The American Civil Liberties Union, which represents three people before the ICC who say they were tortured in Afghanistan, called the decision "misguided and dangerous" and "an unprecedented attempt to skirt international accountability for well-documented war crimes that haunt our clients to this day."

"It reeks of the very totalitarian practices that are characteristic of the worst human rights abusers, and is a blatant effort to intimidate and retaliate against judges, prosecutors, and advocates seeking justice for victims of serious human rights abuses," it said.