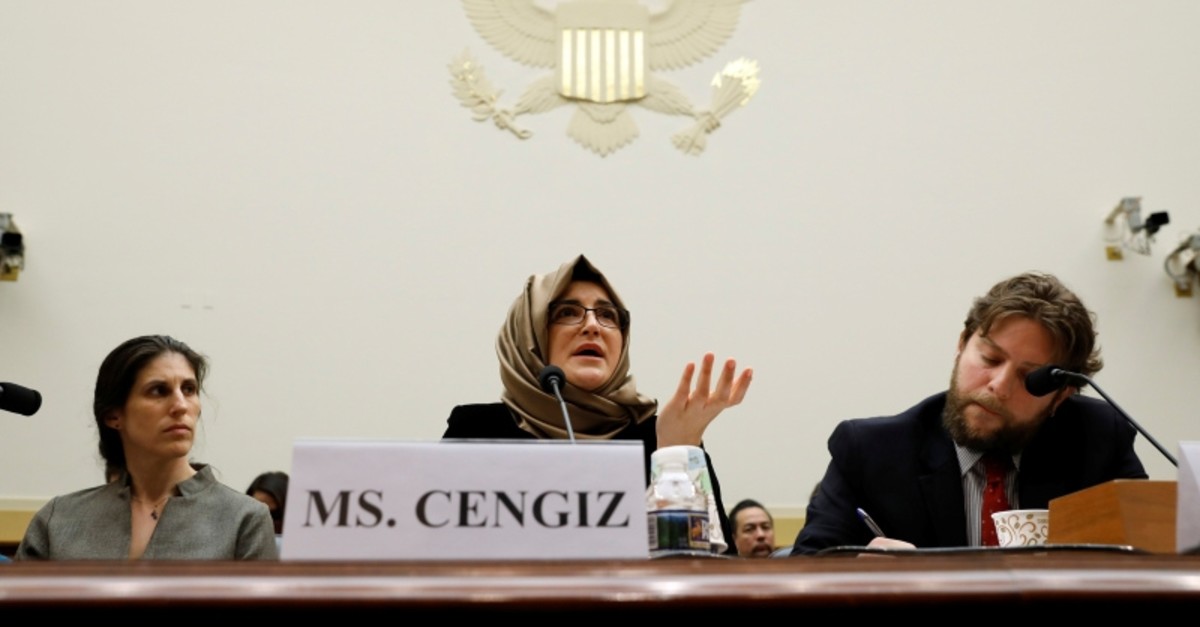 It's been more than six months since Saudi journalist Jamal Khashoggi was brutally killed by a Saudi hit team. Although most of the Western world, especially the U.S., has remained passive in the case for the most part, the writer's fiancee seems hopeful that U.S. Congress may act against Saudi Arabia "in the times ahead."

In an interview with Anadolu Agency in Washington, where she attended a Congressional subcommittee meeting on the murder of her fiancee, Hatice Cengiz said many American lawmakers were not pleased with the U.S. response to the gruesome killing.

Cengiz met Khashoggi at a conference in Istanbul in 2018, and after numerous interactions, the two connected and Khashoggi asked for her hand in marriage, with plans to move together to Washington.

Everything changed in early October last year when Khashoggi went to the Saudi Consulate in Istanbul for documents that would allow him to marry Cengiz.

She was the last person to see Khashoggi, a U.S. resident and columnist for The Washington Post, before he went into the Saudi Consulate in Istanbul on Oct. 2 to obtain papers for their upcoming marriage. The Saudi journalist, a royal insider who became a critic of Crown Prince Mohammed bin Salman, was killed and dismembered inside the consulate by a team of Saudi operatives, provoking international revulsion.

After offering a series of changing narratives to explain what happened, the Saudi government eventually admitted he died there but blamed the operation on a botched rendition attempt.

"There are some views on this issue at Congress, such as (passing a) resolution and (imposing) sanctions. They might come up in the times ahead. I got signals in this direction during my meetings at Congress," she said.

"Many figures told me that 'the attitude of the U.S., in this case, is not enough. Because the murder is against the values that make America what it is. We need to fix this,'" she said.

On Thursday, Cengiz pleaded with Congress to lead a new international investigation into his killing.

She poked criticisms at the stance taken by U.S. President Donald Trump's administration on Khashoggi's killing, telling a House Foreign Affairs subcommittee not enough was being done to hold those accountable for the act.

Cengiz further expressed that it was a duty of humanity to shed light on the murder.

"I found myself in an incredibly huge incident. While I was living in a very modest life, I happened to be a witness in a big murder," she told Anadolu Agency.

"This is a human duty, actually a moral duty. Even if it were not Jamal but anyone else, one thing that a person has to do is to defend his or her right," she said.

The official Saudi narrative has been met with international skepticism as well as stern criticism from U.S. lawmakers about the possibility that Khashoggi's murder could have been carried out without the explicit consent of Saudi Crown Prince Mohammed bin Salman.

The CIA concluded in October that Saudi Crown Prince Mohammed bin Salman ordered the assassination of Khashoggi. However, Trump disputed the CIA report and told reporters, "The CIA points it both ways. Maybe he did, maybe he didn't," a phrase he had used in a controversial statement released on the incident.

But Trump and his top officials have rejected any role bin Salman played in the grisly murder.

Cengiz said there might have been a little bit more reaction if it was someone else but Trump at the presidency.

"Rather, Trump revealed a stance that protected Saudi Arabia. Many of the Democratic and Republican names I met in Congress were not very pleased with the attitude of the administration," she said.

"Everyone (I met) in Congress is indeed a little bit embarrassed about it. I felt that," she added.

Cengiz said she was positive, though, there would be some steps in the near future.

"I stand here as a victim, not a politician. In order to defend a person whose rights are violated, I will do law-intensive studies. That is my next goal," she concluded.

After weeks of denying any involvement in the crime, Saudi Arabia later admitted that Khashoggi had been killed inside the consulate but denied that the royal family and the crown prince had any prior knowledge of or responsibility for Khashoggi's killing. The incident was blamed on lower-level officials, including five that are now facing the death penalty over their involvement. A Saudi public prosecutor said last week that they would seek the death penalty for five suspects among the 21 involved in the case. Ankara has said the statement is not satisfactory and demanded genuine cooperation from Riyadh.