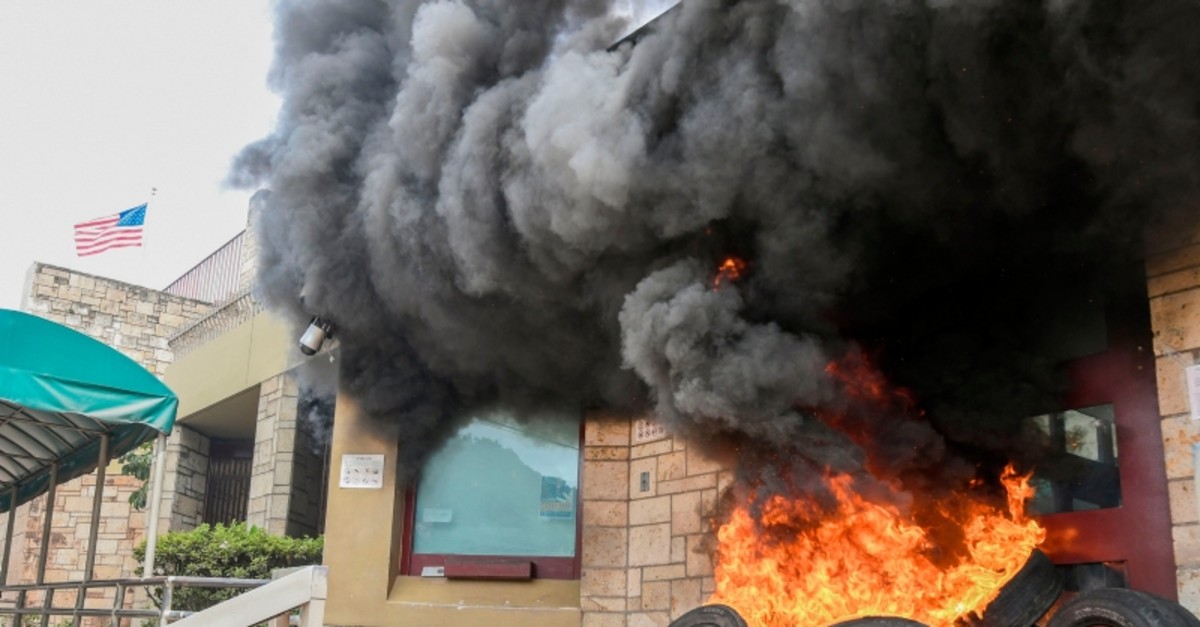 The entrance of the US embassy in Tegucigalpa burns after being set on fire by demonstrators of the education and health sectors protesting against government reforms, on May 31, 2019. (AFP Photo)
by reuters
Jun 01, 2019 1:56 am

Protesters torched the access gate to the U.S. Embassy in the Honduran capital on Friday during a second day of major protests against President Juan Orlando Hernandez.

The protesters set fire to the entrance of the building in downtown ​​Tegucigalpa with about a dozen tires after dousing them with fuel, Reuters witnesses and fire services officials said. A fire department official said there were no damage to the embassy apart from the access gate.

The attack came on the second day of protests over decrees by Hernandez that his critics argue will lead to the privatization of public services.

The demonstrators were pushed toward the embassy after being dispersed from a nearby commercial zone by police nearby, though it was not immediately clear why they attacked the building.

The protesters chanted "American trash, American trash" outside the embassy, which was not being guarded at the time.

A court filing earlier this week showed that Hernandez had been investigated by U.S. authorities as part of a drug trafficking and money laundering probe linked to his brother. The president has not been charged with any crime.

Hernandez has faced stiff opposition in Honduras since he claimed a second term in a highly divisive election at the end of 2017 which was heavily criticized by international observers and which his opponents say he stole.

Hernandez, a conservative ally of the U.S. government, rode out protests against his re-election after he was recognized as the victor by countries including the United States.