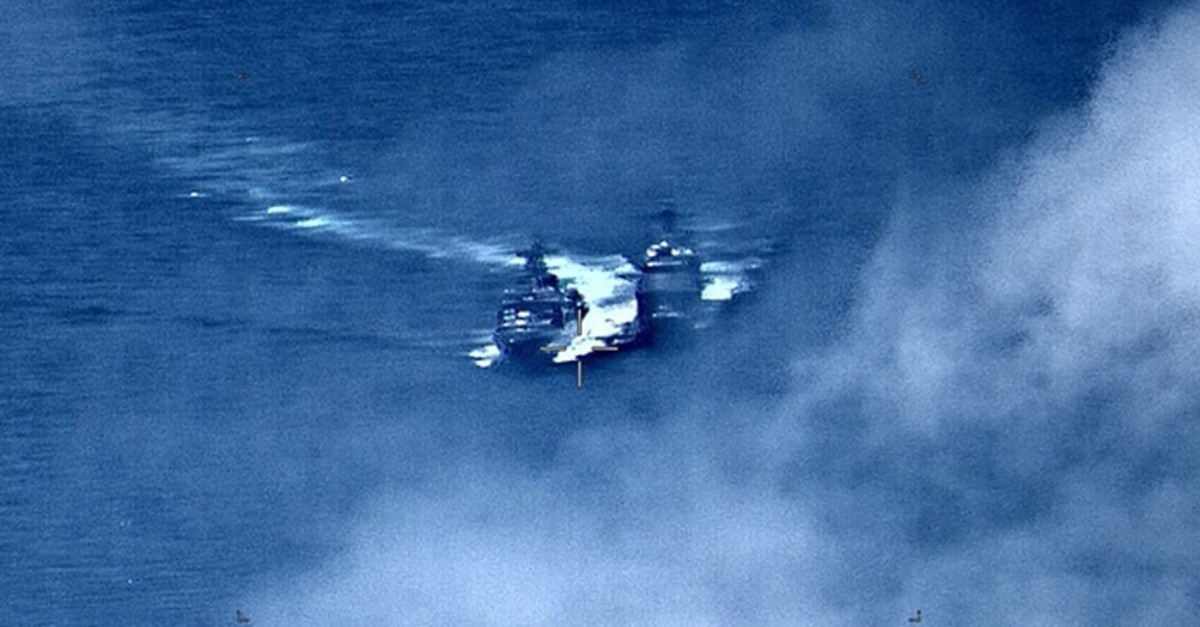 In this image released by the US Navy on June 7, 2019, the Russian anti-submarine ship Admiral Vinogradov (L) sails close to the USS Chancellorsville. (AFP Photo)
by Associated Press
Jun 07, 2019 11:41 pm

The U.S. and Russia accused each other of unsafe actions on Friday after an American guided-missile cruiser and a Russian destroyer came within 165 feet (50 meters) of each other in the Philippine Sea.

Acting Defense Secretary Patrick Shanahan told reporters that the U.S. will file a formal diplomatic complaint about the incident and will have military to military conversations with the Russians. He added that the encounter will not deter the U.S. from conducting naval operations.

The U.S. 7th Fleet said the Russian destroyer put the safety of the USS Chancellorsville and its crew at risk, forcing it to reverse all engines at full throttle to avoid a collision.

No one was injured, and the ships never came into contact, said Navy Cdr. Clay Doss, a spokesman for the Japan-based 7th Fleet.

An American helicopter was preparing to land on the Chancellorsville, which was traveling on a steady course, when the Russian destroyer, traveling behind the U.S. ship, started moving faster and approached as close as 50-100 feet (15-30 meters), the 7th Fleet said in a statement.

"We consider Russia's actions during this interaction as unsafe and unprofessional and not in accordance with the International Regulations for Preventing Collisions at Sea (COLREGS), 'Rules of the Road,' and internationally recognized maritime customs," the statement said.

It was the first such incident involving warships in the region since September, when the Chinese warship Luoyang maneuvered close to the USS Decatur , a Navy destroyer, in the South China Sea, an incident the U.S. also labeled unprofessional and unsafe. The U.S. at the time said the Chinese ship came within 45 yards (41 meters) of the American ship, forcing it to maneuver out of the way. The Chinese said the Luoyang had been deployed to drive the U.S. vessel away from islands that China claims as its own.

The U.S. also has repeatedly complained in recent years that Russian planes have flown dangerously close to American aircraft, and the two nations routinely shadow each other in international airspace.

In this latest incident, in open ocean northeast of the Philippines, the Russian military accused the Chancellorsville of making a dangerous maneuver by crossing the path of the Russian destroyer Admiral Vinogradov. The U.S. said the incident happened in the Philippine Sea, while the Russians said it was in the East China Sea, which is further west and closer to China.

The Russian military said in a statement that the U.S. cruiser "suddenly changed direction and crossed the path of Admiral Vinogradov just 50 meters (165 feet) away," forcing the crew of the Russian ship to make a quick maneuver to avoid a collision. It said its navy sent a radio message in protest.

With U.S.-Russian relations at post-Cold War lows over the Ukrainian crisis, the war in Syria and Moscow's meddling in the 2016 U.S. presidential election, the Russian and U.S. militaries have frequently exchanged accusations of what they describe as unsafe maneuvers by the other side's warplanes and navy ships.