Mexico deploys 15,000 soldiers to US border to prevent migrant crossings 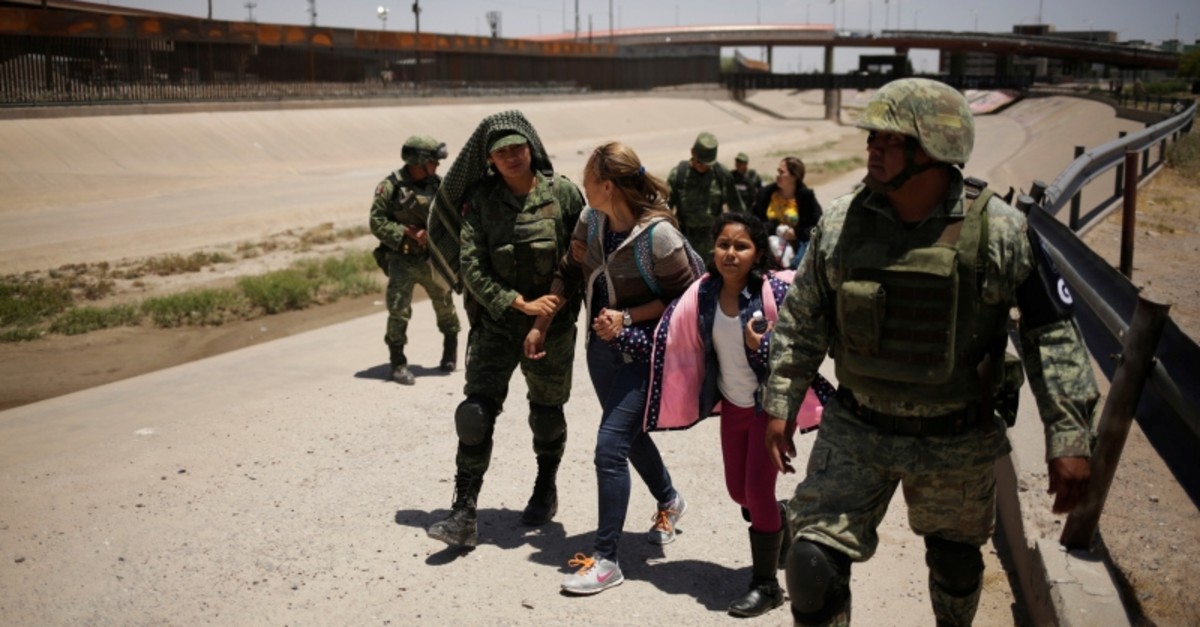 Members of Mexico's National Guard escort a woman and her daughter from Nicaragua after detaining them as they were trying to cross illegally the border between the U.S. and Mexico, in Ciudad Juarez, Mexico June 21, 2019. (REUTERS Photo)
by French Press Agency - AFP
Jun 24, 2019 9:05 pm

Mexico has deployed nearly 15,000 soldiers and National Guardsmen to its border with the United States, the army chief said Monday — admitting they are detaining migrants who try to cross, after the policy triggered backlash.

Under pressure from U.S. President Donald Trump to slow the surge of Central Americans crossing the border, Mexico promised earlier this month to reinforce its southern border with 6,000 National Guardsmen, but had not previously disclosed the extent of the crackdown on its northern border.

"We have a total deployment, between the National Guard and army units, of 14,000, almost 15,000 men in the north of the country," Defense Minister Luis Cresencio Sandoval said at a press conference alongside President Andres Manuel Lopez Obrador.

Asked whether those forces were detaining migrants to prevent them from crossing, Sandoval replied: "Yes."

"Given that (undocumented) migration is not a crime but rather an administrative violation, we simply detain them and turn them over to the authorities" at the National Migration Institute, he said.

The government has faced criticism over migrant detentions at the northern border since an AFP photographer documented last week how heavily armed National Guardsmen in Ciudad Juarez forcefully stopped two women and a young girl from crossing the Rio Grande river into the United States.

The policy is a shift from previous practice. The Mexican security forces had not typically detained migrants at the U.S. border in the past.

However, international law protects the right of undocumented migrants to cross international borders to request asylum. And the U.S. courts have upheld their right to do that anywhere along the border, whether or not it is an official crossing.

Trump wants Mexico to do more to stop a recent increase in migrant arrivals.

Last month, he threatened to impose tariffs on all Mexican goods, extracting a promise from Lopez Obrador's government to reinforce Mexico's southern border and expand its policy of taking back migrants while the US processes their asylum claims.