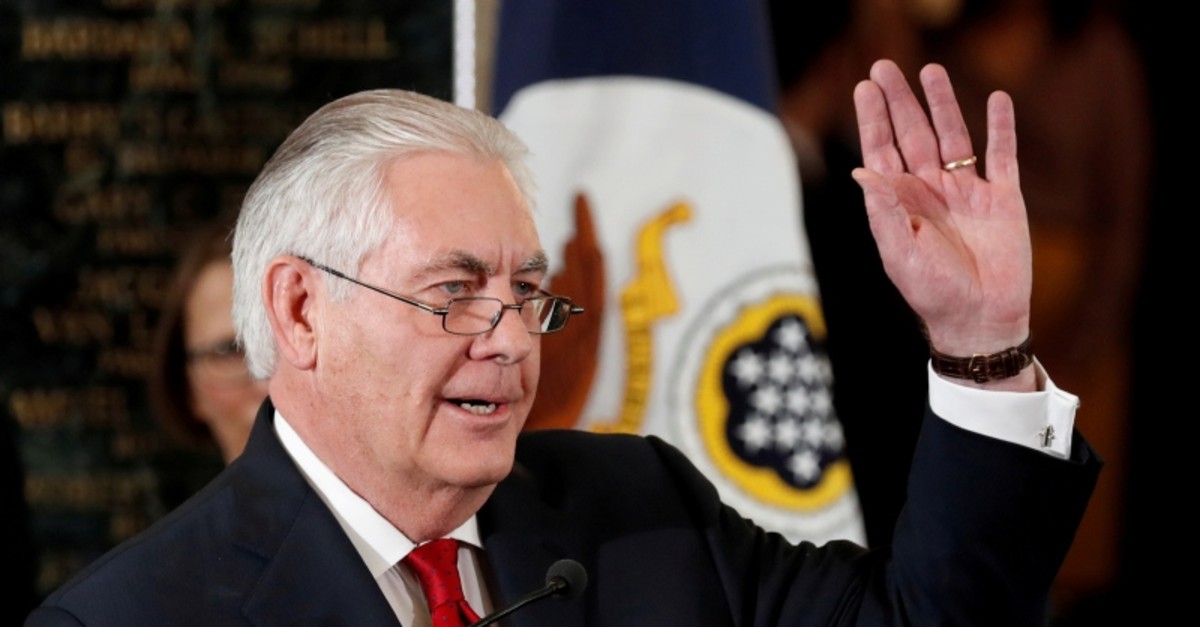 Former U.S. Secretary of State Rex Tillerson cited an awkward encounter with President Donald Trump's son-in-law in a restaurant as an example of diplomacy being conducted behind his back when he was in the administration, according to a transcript of a congressional hearing released Thursday.

Tillerson, who was fired by Trump in March 2018, mentioned the story during a day of closed-door testimony before the House Foreign Affairs Committee about his rocky, 13-month tenure as secretary of state. He described his surprise to find that he happened to be dining in the same Washington restaurant while Jared Kushner and Mexican Secretary of Foreign Affairs Luis Videgaray had a private meal.

The former top U.S. diplomat and CEO of ExxonMobil said he "could see the color go out" of the Mexican official's face when Tillerson greeted them at their table with a smile.

"And I said: 'I don't want to interrupt what y'all are doing,'" Tillerson recalled for the committee. "I said 'Give me a call next time you're coming to town.' And I left it at that."

The White House declined comment on Tillerson's depiction of Kushner's activities, which suggest that Trump's top diplomat was in the dark as the new administration was grappling with major foreign policy issues.

Trump had harsh words for his former top diplomat in December after Tillerson said in rare public remarks that the president was "undisciplined" and did not like to read briefing reports. Trump called him "dumb as a rock" in a tweet.

Tillerson described the restaurant incident as an example of one of the challenges he faced as secretary of state until Trump abruptly fired him over social media.

He said it was a "unique situation" to have the president's son-in-law as a White House adviser, saying "there was not a real clear understanding" of Kushner's role and responsibilities.

"No one really described what he was going to be doing," he said. "I just knew what his title was."

Tillerson said there other examples. He noted that Kushner "met often" with Mohammad bin Salman, the crown prince of Saudi Arabia, and that the president's son-in-law requested that the secretary speak with an official from the kingdom to discuss a document they had been developing that was "kind of a roadmap" for the future of the relationship between the two countries.

The foreign trips raised concerns, the former secretary said, because Kushner would not coordinate with the State Department or the local embassy in the countries he visited. Tillerson said he raised the issue with him but "not much changed."

A committee member asked about a private dinner in May 2017 attended by Kushner, Steve Bannon, bin Salman and Prince Mohammed bin Zayed of the United Arab Emirates in which they discussed the plans by Saudi Arabia and UAE to blockade the neighboring Gulf nation of Qatar, which hosts the headquarters of U.S. Central Command, in the coming weeks.

Tillerson said he didn't know about any such dinner but that it would have made him "angry" if it had occurred, since he and others in the administration were caught off guard by the blockade a few weeks later. The committee did not cite a source for their information about the dinner and the White House declined to comment on the record. Bannon did not respond to a request for comment.

The testimony, with Tillerson accompanied by a personal lawyer and a State Department attorney, took place in private last month. A transcript was released Thursday. There were large sections redacted, including some where he discusses issues related to an Oval Office meeting that involved the Russian Foreign Minister Sergey Lavrov and Ambassador Sergei Kislyak.

He was prohibited from discussing private conversations with Trump and avoided certain highly publicized incidents, including reports he once referred to the president as a "moron."

He told the committee he had never met Trump before being urged by him to take the job and he was stunned by the offer after his long career as an oil industry executive with extensive overseas experience, especially in Russia and the Middle East.

Tillerson, who had been acquainted with Russian President Vladimir Putin since the late 1990s, said he told the leader during his first visit as secretary of state that relations with the United States were bad but could be improved if they worked to build trust.

"I said the relationship is the worst it's been since the Cold War but I looked him in the eye and I said but it can get worse and we can't let that happen," he said.