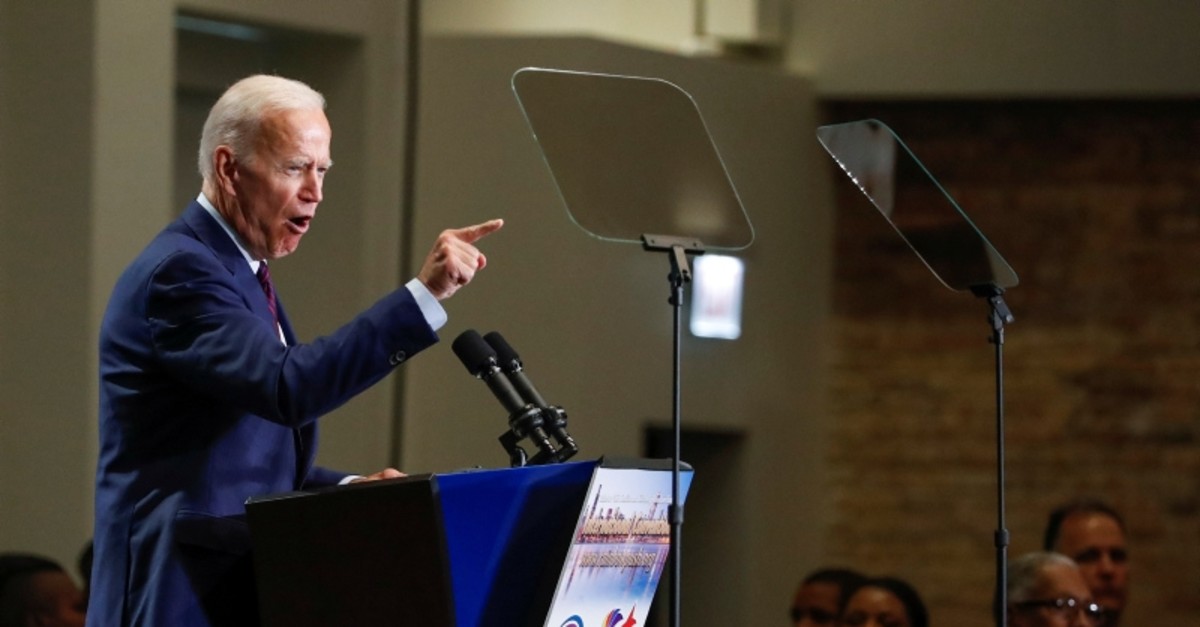 A wounded Joe Biden scrambled to defend his frontrunner status Friday after getting pummeled over his record on race relations at a Democratic election debate, throwing the battle for the party's nomination to challenge President Donald Trump wide open.

Watching from Japan, where he was attending the G20 summit, Trump licked his chops as the 10 Democrats at the Thursday night debate in Miami veered sharply to the left on immigration, health care, taxes and the ever-emotional subject of gun ownership.

Biden, vice president under still highly popular ex-president Barack Obama, came in as the outright favorite, polling well ahead of Trump and all Democratic rivals.

But it was Kamala Harris, the only black woman in the 2020 race, who stole the show when she left 76-year-old Biden speechless by attacking his stance on civil rights issues.

Harris, a senator and former attorney general of California, pinned down Biden on his past opposition to busing programs that forced integration of segregated school systems in the 1970s.

Biden faltered in response, then cut himself off, saying: "My time is up."

Although he was referring to the few seconds granted by moderators on the crowded debate stage, his words went viral on Twitter as a symbolic admission that he is a man of yesteryear in a party demanding radical change.

"Not a good day for Sleepy Joe," Trump summarized with his characteristic use of name calling on Twitter.

Biden got a chance for a riposte with a speech in Chicago on Friday where he highlighted his many contributions to civil rights, as well as the fact that he was deputy to America's first black president.

"We all know that 30 seconds to 60 seconds on a campaign debate exchange can't do justice to a lifetime commitment," he said.

However, he risked getting in further trouble with his phrasing about the need to give youngsters in disadvantaged black communities a chance when he said "that kid wearing the hoodie" could turn out to be a poet rather than a "gangbanger" -- slang for gangster.

The radical spirit pulling the Democratic Party leftward was on full display both Thursday and in a similar debate held Wednesday, illustrating how a centrist like Biden may have trouble getting through the primaries.

But it's too early to say whether Biden, an affable, but gaffe-prone figure, will see his big polling lead melt away.

The rough debate treatment, which also included Sanders recalling that Biden had voted for going to war in Iraq, could instead harden the former VP ahead of what will be a brutal battle with Trump.

"While Biden didn't soar, we doubt he was fatally damaged by any of this," veteran politics watcher Larry Sabato said in his post-game analysis.

Whichever of the more than 20 Democratic contenders is finally chosen, he or she will then have to take on Trump, who has proven he will use everything from insults to made-up facts to get his message across.

With her takedown of Biden, Harris, 54, emerged as someone not afraid to play tough.

In what could only have been a carefully rehearsed attack, drawing on all her experience as a courtroom prosecutor, she first disarmed Biden by saying she was sure he was no racist.

But then she began to question his history of opposition on the fraught issue of school busing.

In fact, busing was hugely controversial and not all opposition was motivated by wanting racial segregation. But Harris had clearly planned to score a point -- and she succeeded.

"There was a little girl in California who was part of the second class to integrate her public schools and she was bused to school every day," she said in a quivering voice to the hushed audience and to Biden.

"That little girl was me."

While the Florida debate was still going, the Harris campaign tweeted out that killer line with a picture of Harris as a schoolgirl in pigtails. A T-shirt bearing the same image went on sale immediately after.