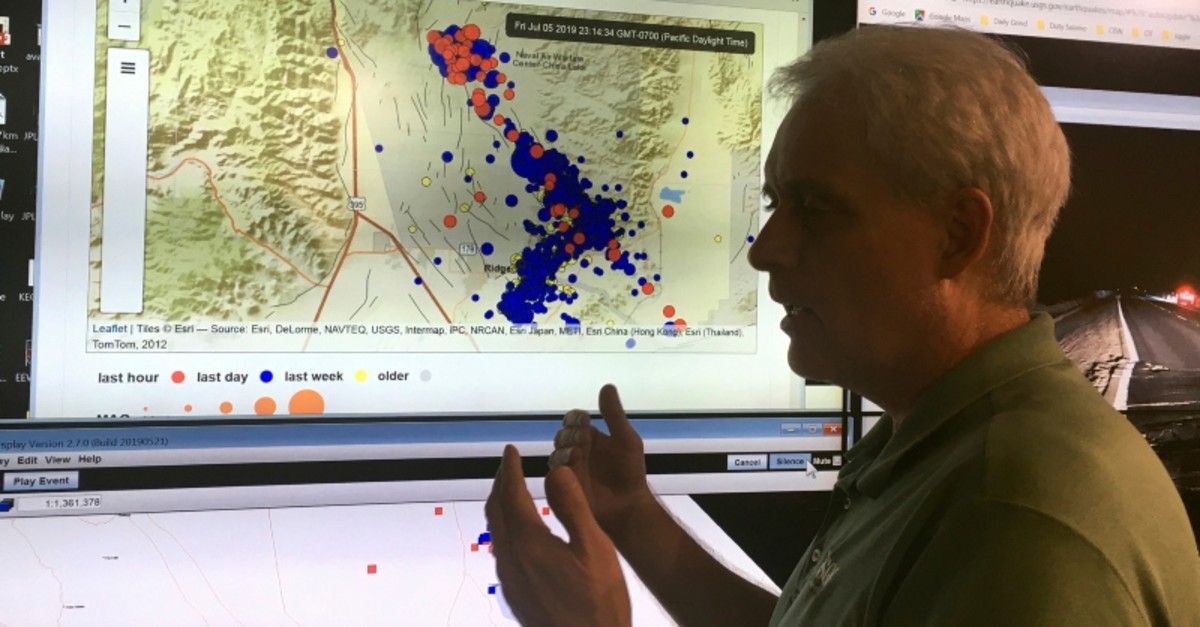 Robert Graves, a seismologist from the U.S. Geological Survey, stands in front of a display of earthquakes in Searles Valley during a news conference at the California Institute of Technology in Pasadena, Calif., Friday evening, July 5. (AP Photo)
by Jul 06, 2019 10:46 am

Southern California was hit by its largest earthquake in two decades Friday, a 7.1-magnitude tremor that rattled residents less than 48 hours after another quake struck the same area.

The shallow earthquake hit a sparsely populated area near the small town of Ridgecrest, around 150 miles (240 kilometers) northeast of Los Angeles, where it was also felt.

With details of the impact still scarce, no deaths had been reported late Friday evening, but there were reports of damage including fires.

The quake was 11 times stronger than the 6.4-magnitude quake "foreshock" the previous day, according to the United States Geological Survey (USGS).

"This is an earthquake sequence. These earthquakes are related," said Caltech seismologist Lucy Jones.

There was a 10 percent chance of Friday's quake being followed by another magnitude 7.0 or higher quake in the next week, she added.

In Kern County, where the quake struck, some 1,800 residents were without power, fire department chief David Witt said.

At least two fires broke out in the area, county supervisor Mick Gleason said, with dozens of fire trucks dispatched.

But Mayor Eric Garcetti said there were "no reports of serious damage" reported in the city.

"We are sending an Urban Search and Rescue Task Force Team to Kern County to help with the damage closer to the epicenter," he wrote on Twitter.

Numerous parkgoers at Disneyland in Anaheim reported on Twitter that rides were shut for safety inspections after the quake.

Patrons at movie theaters in the Los Angeles area evacuated due to the quake.

"Everyone remained calm as the theater began to shake and then the shaking got stronger. We all headed to exits and down the stairs. No panic but one woman sobbing. This one was scary," wrote NBC journalist Lester Holt on Twitter.

No damage was reported at Los Angeles airport following inspections.

In Las Vegas, 150 miles east of the quake, an NBA summer league game was postponed when the tremor hit, causing the scoreboard and several overhead speakers to sway.

The earthquake was the largest in southern California since 1999 when a 7.1-magnitude quake struck the Twentynine Palms Marine Corps base, according to The Los Angeles Times.

The tremor sent Ridgecrest residents fleeing outside for safety as aftershocks continued, with one woman saying she was "not comfortable" about heading back inside for the night.

The shaking stops "for a minute, and then it starts rolling again... it's pretty bizarre. But now at the moment, I'm not comfortable inside," said Jessica Kormelink.

"I was actually in the car with my mom. And it just started bouncing up," Jessica Weston, a journalist at the Ridgecrest Daily Independent, told CNN.

Relief efforts in the Ridgecrest area benefited from the arrival of major reinforcements that arrived Thursday afternoon, intended to counter a new potentially destructive earthquake.

The quake revived fears of the "Big One" -- a powerful tremor along the San Andreas Fault that could devastate major cities in southern California.