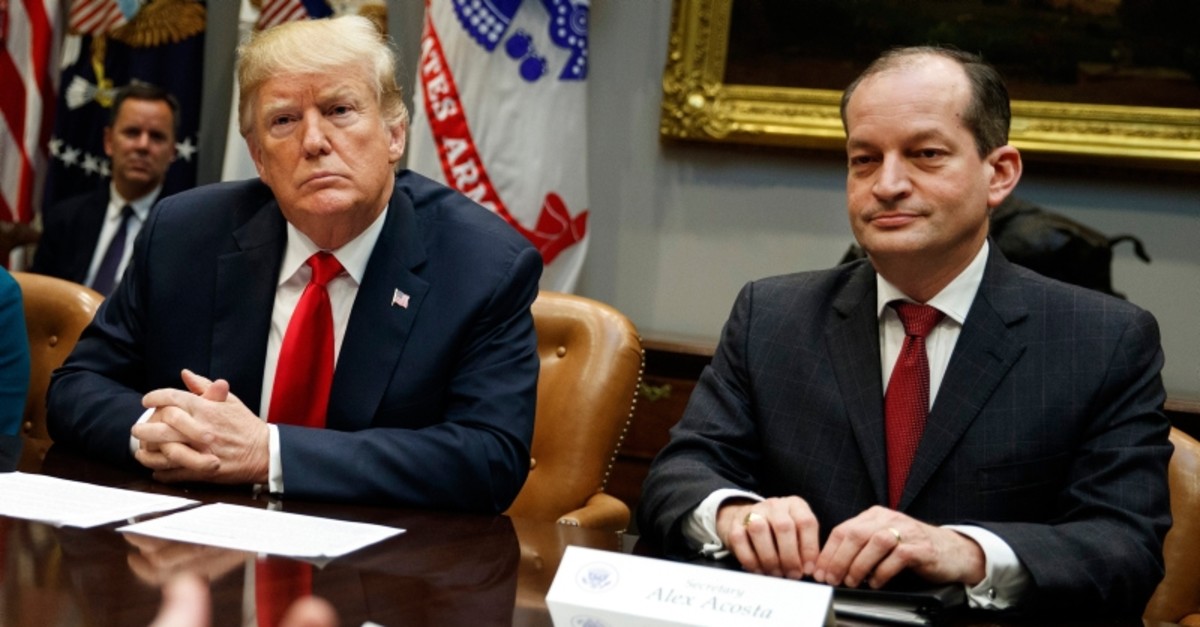 In this Sept. 17, 2018, file photo, Pres. Donald Trump, left, and Labor Secretary Alexander Acosta listen during a meeting of the President's National Council of the American Worker in the Roosevelt Room of the White House in Washington. (AP Photo)
by Daily Sabah with AP Jul 09, 2019 9:08 pm

Speaking to reporters, Trump said he feels "very badly" for Acosta and praised him as "very good" at his job.

"If you go back and look at everybody else's decisions, whether it's a U.S. attorney, or an assistant U.S. attorney or a judge, if you go back 12 or 15 years ago or 20 years ago and look at their past decisions, I would think you would probably find that they would wish they'd maybe did it a different way," said Trump. He added that "there were a lot of people involved in that decision" on Epstein, "not just him."

The comments came as a parade of presidential contenders and other top Democrats demanded that Acosta, a former federal prosecutor in south Florida, resign or be fired over his role in the secret 2008 plea deal that let Epstein, a wealthy financier, avoid federal prison after allegations of molesting teenage girls. Epstein pleaded guilty to state charges of soliciting a minor for prostitution and served 13 months in jail, during which he was allowed out to go to his office during the day.

That arrangement has drawn renewed attention since federal prosecutors in New York unveiled an indictment Monday charging Epstein with sexually abusing dozens of underage girls in the early 2000s.

Trump has his own history with Epstein, though he said Tuesday they'd had "a falling out" and hadn't been in contact for about 15 years.

In 2002, Trump told New York magazine that he'd known the now-jailed billionaire for 15 years and considered him "a terrific guy" who enjoyed women "on the younger side."

"The president needs to answer for this, and 'I don't recall' is not an acceptable answer in this case, particularly since President Trump appointed Acosta to such a powerful position," Schumer, D-N.Y., said on the Senate floor.

Trump, questioned on Tuesday, said he felt "very badly" for Acosta because he's been a "very good" secretary of labor. But the president also said repeatedly that the White House would be looking deeper into the issue. Former White House Press Secretary Sarah Sanders had said the White House was looking into Acosta's role in the settlement back in February.

Acosta also weighed in on the Epstein charges for the first time, saying in a series of tweets that new evidence emerging in New York "offers an important opportunity to more fully bring him to justice." He said Epstein's actions were "horrific" and expressed pleasure that prosecutors in New York were presenting a new case, but he made no mention of the calls for him to step down.

Schumer said Acosta must quit and if he won't Trump should fire him.

"Instead of prosecuting a predator and serial sex trafficker of children, Acosta chose to let him off easy," Schumer said. "This is not acceptable. We cannot have as one of the leading appointed officials in America someone who has done this."

Also calling for Acosta's resignation were many members of the Democrats' huge field of presidential hopefuls. They include Sens. Amy Klobuchar of Minnesota, Kirsten Gillibrand of New York, Elizabeth Warren of Massachusetts, Cory Booker of New Jersey and Kamala Harris of California.

Epstein, known for a jet-setting lifestyle and connections to the powerful including Trump and former President Bill Clinton, could face up to 45 years in prison if he is convicted on the sex trafficking and conspiracy charges. He has pleaded not guilty.

The South Florida case against Epstein involved at least 40 teenage girls. The agreement Acosta was involved in let him avoid a possible life sentence if he had been convicted.

Klobuchar tweeted, "Since when do underage girl sex ring traffickers get to go to their office every day while they serve their time?"

Referring to the Labor secretary's post, Gillibrand told a reporter in Manchester, New Hampshire, that Acosta "never should have been there in the first place."

Monday night, Pelosi tweeted, "As US Attorney, he engaged in an unconscionable agreement w/ Jeffrey Epstein kept secret from courageous, young victims preventing them from seeking justice. This was known by @POTUS when he appointed him to the cabinet." She added the hashtag, #AcostaResign.

"He's a lot of fun to be with," Trump was quoted as telling New York magazine in 2002. "It is even said that he likes beautiful women as much as I do, and many of them are on the younger side. No doubt about it — Jeffrey enjoys his social life."