US poised for immigration crackdown as Trump abandons citizenship question 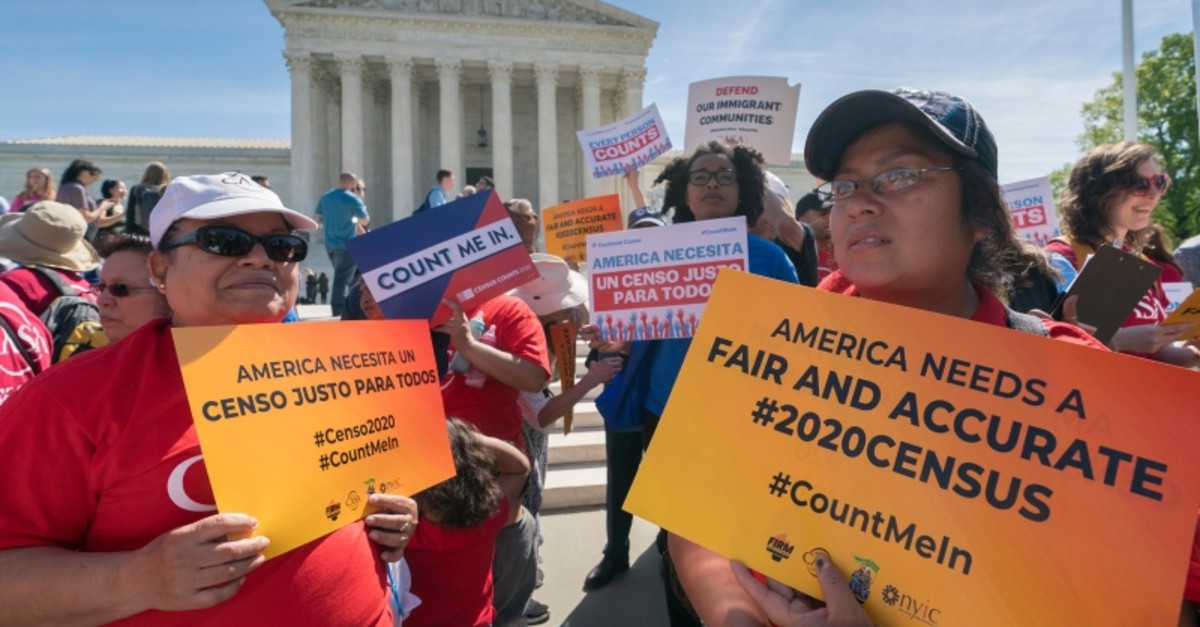 In this April 23, 2019 file photo, immigration activists rally outside the Supreme Court as the justices hear arguments over the Trump administration's plan to ask about citizenship on the 2020 census, in Washington. (AP Photo)
by Associated Press Jul 11, 2019 8:23 pm
A nationwide immigration enforcement operation targeting people who are in the United States illegally is expected to begin this weekend after it was postponed last month by President Donald Trump, according to two administration officials and immigrant activists.

The operation, which has sparked outrage and concern among immigrant-rights advocates, would target people with final deportation orders, including families whose immigration cases were fast-tracked by judges in 10 major cities, including Chicago, Los Angeles, New York and Miami.

"Our communities have been in constant fear," Estela Vara, a Chicago-area organizer said Thursday at a rally outside the city's Immigration and Custom Enforcement offices where some activists chanted "Immigration Not Deportation!"

The sweep remains in flux and could begin later, according to the administration officials, who were not authorized to discuss the matter publicly and spoke on condition of anonymity. Still, activists ramped up efforts to prepare by bolstering know-your-rights pocket guides, circulating information about hotlines and planning public demonstrations. Vigils outside of detention centers were set for Friday, to be followed by protests Saturday in Miami and Chicago.

The operation is similar to ones conducted regularly since 2003 that often produce hundreds of arrests. It is slightly unusual to target families, as opposed to immigrants with criminal histories, but it's not unprecedented. The Obama and Trump administrations have targeted families in previous operations.

But this latest effort is notable because of the politics swirling around it.

Trump announced on Twitter last month that the sweep would mark the beginning of a push to deport millions of people who are in the country illegally, a near-impossibility given the limited resources of ICE, which makes the arrests and carries out deportation orders.

Then he abruptly canceled the operation after a phone call with House Speaker Nancy Pelosi, a California Democrat, while lawmakers worked to pass a $4.6 billion border aid package. Plus, details had leaked, and authorities worried about the safety of ICE officers.

The agency said in a statement that it would not discuss specifics about enforcement operations.

"As always, ICE prioritizes the arrest and removal of unlawfully present aliens who pose a threat to national security, public safety and border security," according to the statement.

Pelosi said she hoped the administration would reconsider. "Families belong together," she said.

The administration has been straining to manage a border crisis, and some officials believe flashy shows of force in deporting families would deter others migrants from coming. But others have criticized any move that draws resources away from the border at a time when the Border Patrol is detaining four times the number of people it can hold. Also, a watchdog report found filthy, potentially dangerous conditions at some stations.

Democratic Rep. Pramila Jayapal of Washington state, co-chair of the Congressional Progressive Caucus and a former immigrant advocate, accused the administration of showing a "willingness to be cruel at every turn. It sickens me that this is this is the United States of America. We are so much better than this."

Some activists said they were gearing up for operations to start Sunday and planned to protest. Organizers estimated a rally planned for Saturday in Chicago would draw around 10,000 people.

"We will not be swayed by fear and fiat," said Justin Valas with Asian Americans Advancing Justice in Chicago.

Others said they were skeptical that Trump would follow through on the threat.

Advocates have ramped up know-your-rights training since Trump took office, reminding immigrants, regardless of their immigration status, about their right to remain silent and to ask authorities for proper paperwork.

They have also explained that immigrants can often avoid arrest simply by not opening doors to agents, who need permission to enter private homes. That has forced ICE officers to wait outside courthouses and other public places to make arrests.

"We don't want to alarm folks, but we want to alert folks," said Melissa Taveras of the Florida Immigrant Coalition.

Trump abandoned his controversial bid to demand citizenship details from all respondents in next year's census Thursday, instead directing federal agencies to try to compile the information using existing databases.

"It is essential that we have a clear breakdown of the number of citizens and non-citizens that make up the United States population," Trump said at a Rose Garden announcement. He insisted he was "not backing down."

His reversal comes after the Supreme Court blocked his efforts to include the citizenship question and as the government had already begun the lengthy and expensive process of printing the census questionnaire without it.

Trump had said last week that he was "very seriously" considering an executive order to try to force the question's inclusion, even though such a move would surely have drawn an immediate legal challenge.

But he said Thursday that he would instead be signing an executive order directing agencies to turn records over to the Department of Commerce.

"We're aiming to count everyone," he said.

Trump's 2016 campaign was animated by his pledge to crack down on illegal immigration, and he has tied the citizenship question to that issue, insisting the U.S. must know who is living here.

Trump's administration has faced numerous roadblocks to adding the question, beginning with the ruling by the Supreme Court temporarily barring its inclusion on the grounds that the government's justification was insufficient. A federal judge on Wednesday also rejected the Justice Department's plan to replace the legal team fighting for inclusion, a day after another federal judge in Manhattan issued a similar ruling, saying the government can't replace nine lawyers so late in the dispute without satisfactorily explaining why.

Trump had offered several explanations for why he believes the question is necessary to include in the once-a-decade population count that determines the allocation of seats in the House of Representatives for the next 10 years and the distribution of some $675 billion in federal spending.

"You need it for Congress, for districting. You need it for appropriations. Where are the funds going? How many people are there? Are they citizens? Are they not citizens? You need it for many reasons," he told reporters last week, despite the fact that congressional districts are based on total population, regardless of residents' national origin or immigration status.

If immigrants are undercounted, Democrats fear that would pull money and political power away from Democratic-led cities where immigrants tend to cluster, and shift it to whiter, rural areas where Republicans do well.