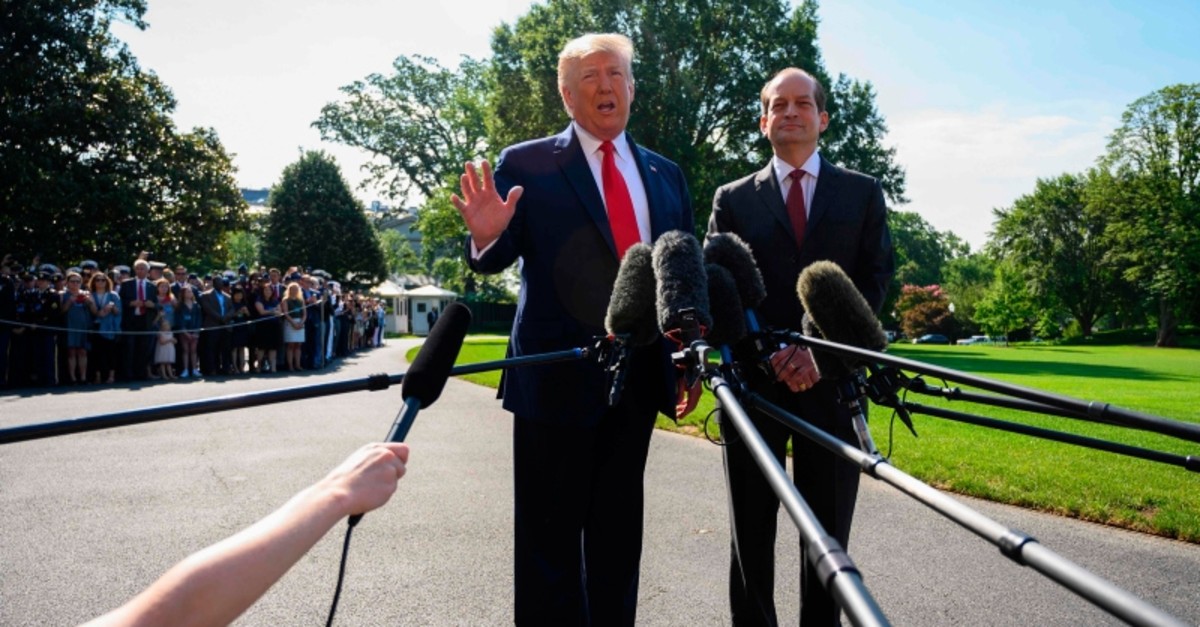 US President Donald Trump (L) gestures as US Labor Secretary Alexander Acosta looks as they speak to the media on July 12, 2019 at the White House in Washington, DC. (AFP Photo)
by Compiled from Wire Services Jul 12, 2019 6:52 pm

U.S. Labor Secretary Alex Acosta said he is resigning on Friday after weeks of furor over a plea deal given to billionaire financier Jeffrey Epstein, a registered sex offender.

President Donald Trump announced Acosta's resignation at the White House, saying it was Acosta's decision and he would be happy to have Acosta continue as a member of his cabinet.

"There hasn't been an ounce of controversy until this came up," Trump said with the labor secretary at his side. "This was him, not me, because I'm with him."

Acosta previously said he had no plans to resign over the plea deal, which he negotiated while he was serving as a U.S. attorney in Florida.

The labor secretary oversaw a favorable plea deal for the billionaire, in which Epstein was formerly let off with a significantly lighter sentence in a secret deal that saw him serve about a year in prison and had him register as a sex offender. He served most of his term in work release.

He was able to get out of a possible life sentence in that case, which involved soliciting a minor for prostitution.

Epstein, 66, was accused in an indictment made public Monday and since his arrest has been held in prison on sex trafficking charges, according to the documents.

Prosecutors say that between 2002 and 2005, Epstein recruited minors as young as 14 to visit his homes in Florida and New York, and paid them to engage in sex acts.

Acosta said at a news conference on Wednesday that while the plea deal he oversaw in 2008 allowed Epstein to avoid prosecution, it was the best option at the time because it ensured that he would serve jail time and register as a sex offender.

Critics have said the punishment was too lenient, and victims' advocates have complained that it was done without the knowledge of the girls involved.

Acosta said Friday that he didn't feel it was "right and fair" for the Department of Labor to have the Epstein case as its focus rather than its achievements on lowering unemployment and workplace safety.

Epstein has been linked in the past to Trump and other high-profile figures. Trump on Friday repeated that he had a falling-out with Epstein and hasn't spoken with him in about 15 years.

Acosta said his departure would be effective in seven days.