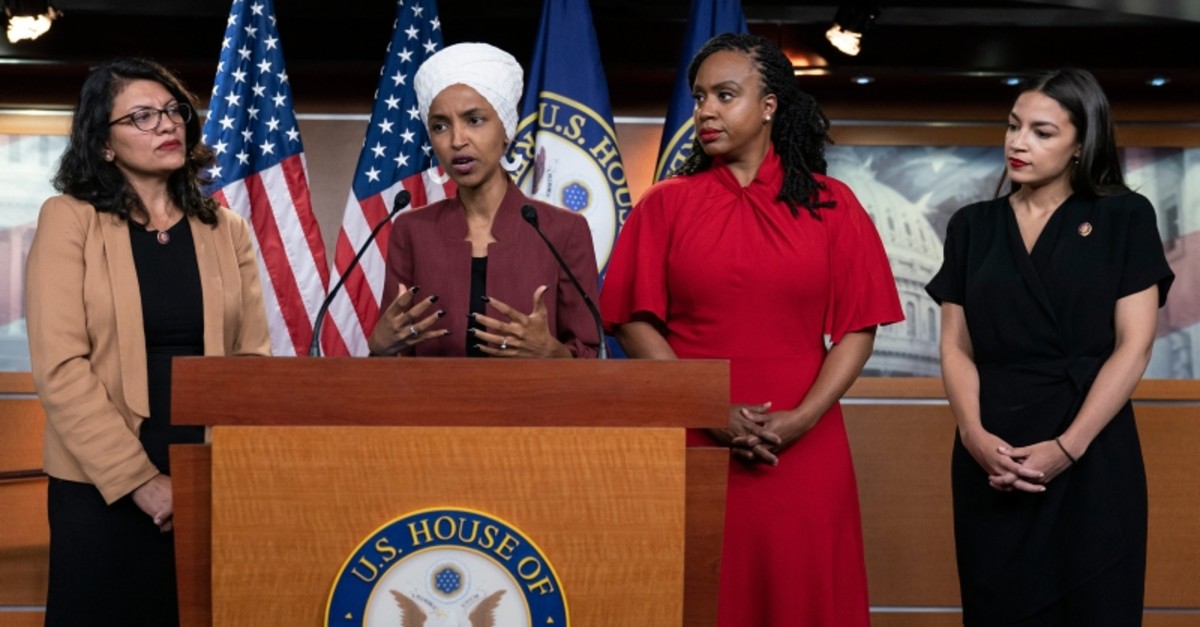 Democratic Reps. Ayanna Pressley of Massachusetts, Ilhan Omar of Minnesota, Rashida Tlaib of Michigan and Alexandria Ocasio-Cortez of New York lashed out at President Donald Trump on Monday over his remarks targeting them.

The freshmen lawmakers held a news conference at the Capitol hours after Trump defended his tweets singling out the congresswomen of color, falsely claiming "these are people who hate our country."

Trump issued the controversial tweets Sunday against "'Progressive' Democrat Congresswomen" whom he did not name, saying they should go back to "the totally broken and crime infested" countries they came from.

House Speaker Nancy Pelosi, who said Trump's campaign slogan truly means he wants to "make America white again," announced Monday that the House would vote on a resolution condemning his new comments. The resolution "strongly condemns President Donald Trump's racist comments" and says they "have legitimized and increased fear and hatred of new Americans and people of color."

The Senate's top Democrat, Chuck Schumer of New York, said his party would also try to force a vote in the GOP-controlled chamber.

Trump's remarks have been condemned as racist and xenophobic.

"This is the agenda of white nationalists," said Omar, and the remarks were Trump's "blatantly racist attack".

"And so for him to condemn us and to say we are un-American for wanting to work hard to make this country be the country we all deserve to live in, it's complete hypocrisy," she said.

Ocasio-Cortez, a 29-year-old of Puerto Rican ancestry, is the youngest member of the House, while Pressley is the first African American elected to Congress from Massachusetts.

Tlaib and Omar are the first two Muslim women elected to Congress.

Tlaib is the first American of Palestinian descent elected to the body, while Omar, who fled war-torn Somalia as a child and came to the United States as a refugee, is the first black Muslim woman in the legislature. She wears the hijab.

They are all part of the new wave that helped flip the House of Representatives back to Democratic control, and all took office in January.

They are united by their drive to oppose the Republican Trump using the same weapon he does -- social media -- to advance a progressive agenda, despite resistance from more centrist Democrats.

Ocasio-Cortez considers herself a socialist, which in the United States puts her on the party's left-most flank with Senator Bernie Sanders.

Pressley, 45, is a fierce critic of the Trump administration's immigration policies, who has slammed the fact that migrants have been put in "cages" at detention facilities.

She, Tlaib and Ocasio-Cortez are all members of the powerful House finance committee.

On Monday, Pressley said that the "squad" is by no means limited to herself and the other three lawmakers.

"Our squad is big. Our squad includes any person committed to building a more equitable and just world and that is the work that we want to get back to," she said.