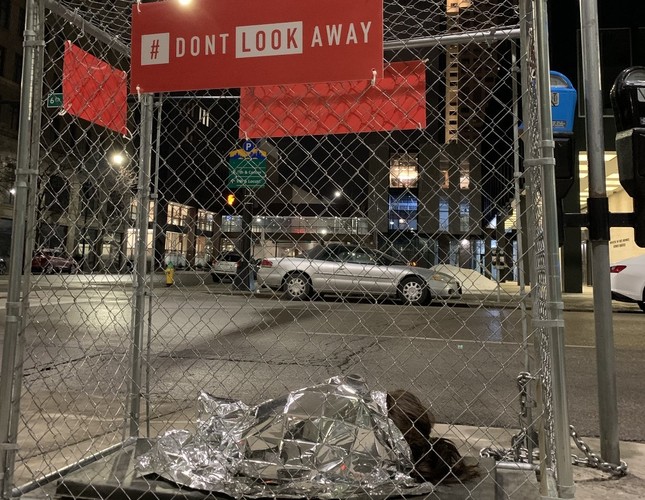 The cages which have "don't look away" written on them were placed by the immigration advocacy group RAICES and contain dolls that look like children covered with silver thermal blankets that are used by U.S. Customs and Border Protection (CBP) detention facilities.

The mannequins play an actual audio recording from 2018 of children who have been detained and separated from their parents by the Trump administration.

"Today caucus-goers in Iowa woke up to more than a dozen kids in cages all over the city of Des Moines. We came to remind people that this remains a reality and that the issue cannot be pushed under the rug," RAICES wrote on its Twitter account.

🚨 BREAKING: We&#39;ve placed more than a dozen cage installations across the city of Des Moines, asking that we #DontLookAway at the continued separation &amp; caging of families, record deportations &amp; hostility towards immigrants &amp; refugees.

The nearly 70,000 migrant children who were held in government custody last year – up 42% in the fiscal year 2019 from 2018 – spent more time in shelters and away from their families than in previous years. The Trump administration's series of strict immigration policies have increased the time children spend in detention, despite the government's own acknowledgment that it does them harm. In 2013, Australia detained 2,000 children during a surge of maritime arrivals. In Canada, immigrant children are separated from their parents only as a last resort with only 155 detained in 2018 an in the United Kingdom, 42 migrant children were put into shelters in 2017, according to officials in those countries.

The U.S. government calls migrant children held without their parents' "Unaccompanied Alien Children," or UAC in bureaucratic jargon. Federal law requires the Department of Health and Human Services' Office of Refugee Resettlement to provide them food and shelter, as well as medical and mental healthcare. But the HHS Office of Inspector General found that there are not enough clinicians or specialized care in shelters holding migrant children.

Share on Facebook Share on Twitter
Previous in Americas Problems with a mobile app appeared to force a delay in reporting... Next in Americas Pete Buttigieg led in Iowa's initial caucus results with 62% of precincts...
DAILY SABAH RECOMMENDS